It is with great sadness that I report the death of Pauline Campbell whose body was found at the grave of her daughter Sarah this morning. She was an inspiration to all who knew her, both activists and journalists alike. She fought for years for the rights of those whom the government and society would try to forget. She was never afraid to put herself in the firing line and to this effect she was arrested 15 times though the state never succeeded in prosecuting her. To see her courageous action and eloquent speeches it was easy to forget that she fought a daily battle with her grief at losing her only daughter. Something she never really recovered from.

She leaves behind a proud legacy of tireless campaigning and direct action. Rest in peace Pauline. You will be remembered with great pride and affection by all of us who had the honour of knowing you. 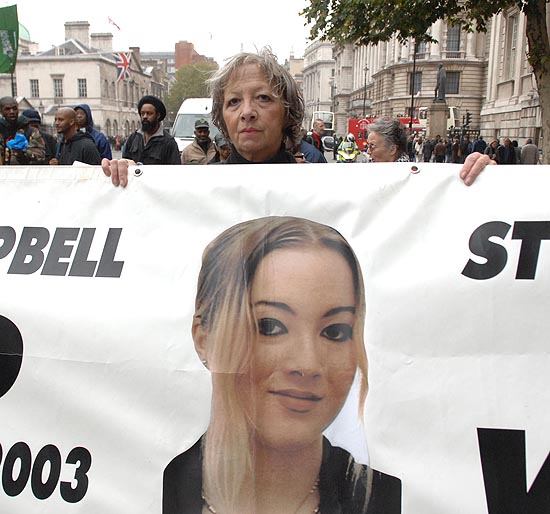 That sucks, I'm shocked and deeply saddened by this news.

I meet her a couple of times and interviewed her for a film I was making about the friends and families campaign. She was a remarkable and dedicated women with a passion to see justice done, not just for her daughter but for all those murdered at the hands of the state.

While I was search for the link I found the article below. It's from the Mirror last week and reports that the CPS will not prosecute the police who killed Frank Ogboru (who's widow also tells her emotional story in the video above)...

A tourist screams "I can't breathe, I can't breathe" as four policemen pin his neck to the ground in the street. Within seconds, Frank Ogboru stops breathing and dies. But none of the men restraining the Nigerian car dealer will be face a court because the Crown Prosecution Service says there is not enough evidence to charge them.

It is the second time in three years that the CPS has decided not to prosecute police over the death of a black man during or shortly after arrest. In 2005, they ruled out charges against eight officers who restrained Roger Sylvester just before he collapsed with breathing problems in 1999.
Advertisement

Officers were called to a block of flats where Mr Ogboru had argued with the owner's girlfriend. The film shows him calmly talking to two of them. But when the officers order Mr Ogboru not to return to the flat where he is staying, he protests and is led away. Off camera, the confrontation escalates and the officers use CS gas to floor Mr Ogboru and attempt to put handcuffs on him.

Members of the public gathered round, with one filming the struggle on the pavement on his mobile phone. CCTV footage shows two more officers arriving to help restrain Mr Ogboru, who is still struggling.

Eyewitnesses claimed that officers appeared to have their "knees and feet" on him as he "wailed like a dog", pleading he could not breathe. The film appears to show one officer's knee over Mr Ogboru's neck while his head hangs over the kerb. As soon as the officers realise he is dying, they desperately try to revive him, but fail. The official pathology report gave the cause of death as "asphyxia during restraint".

Afterwards, witness Sean Pops, 27, who saw several officers kneeling on Mr Ogboru, said: "The officers were on top of him, you could tell he was in a lot of pain.

Mr Ogboru's widow Christy, 40, who wants the police officers charged, said at her home in Nigeria: "My husband is gone. I can't have him but I must have justice. I feel very let down by the system of justice in Britain."

No officer has been found guilty over a custody death despite 501 in 10 years.

Four in five victims were black or Asian. Campaigner Deborah Coles said: "There is a pattern of these deaths around black men. But even when an inquest jury finds unlawful killing, the CPS don't prosecute." Here are just five tragic cases.

Mentally ill chef had heart attack as police restrained him in Slough, Berks.

Cops laughed as handcuffed ex-Para choked on blood and vomit in Hull.

Cuffed and sprayed with CS gas after domestic row arrest in East London.

Hit her head after cops wrapped 13ft of tape over her face in North London.

The 4WardEver Campaign UK in collaboration with Migrant Media (Makers of the film INJUSTICE) have set up a blog to remember Pauline. There's also the possibility of leaving a message of condolence there:

This is so sad news. Pauline has been a great inspiration of how one brave and determined person alone can actually make a difference, despite the obligatory intimidation by the police and the authorities. Pauline lives on in our hearts.