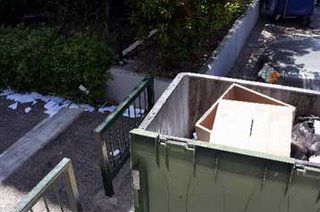 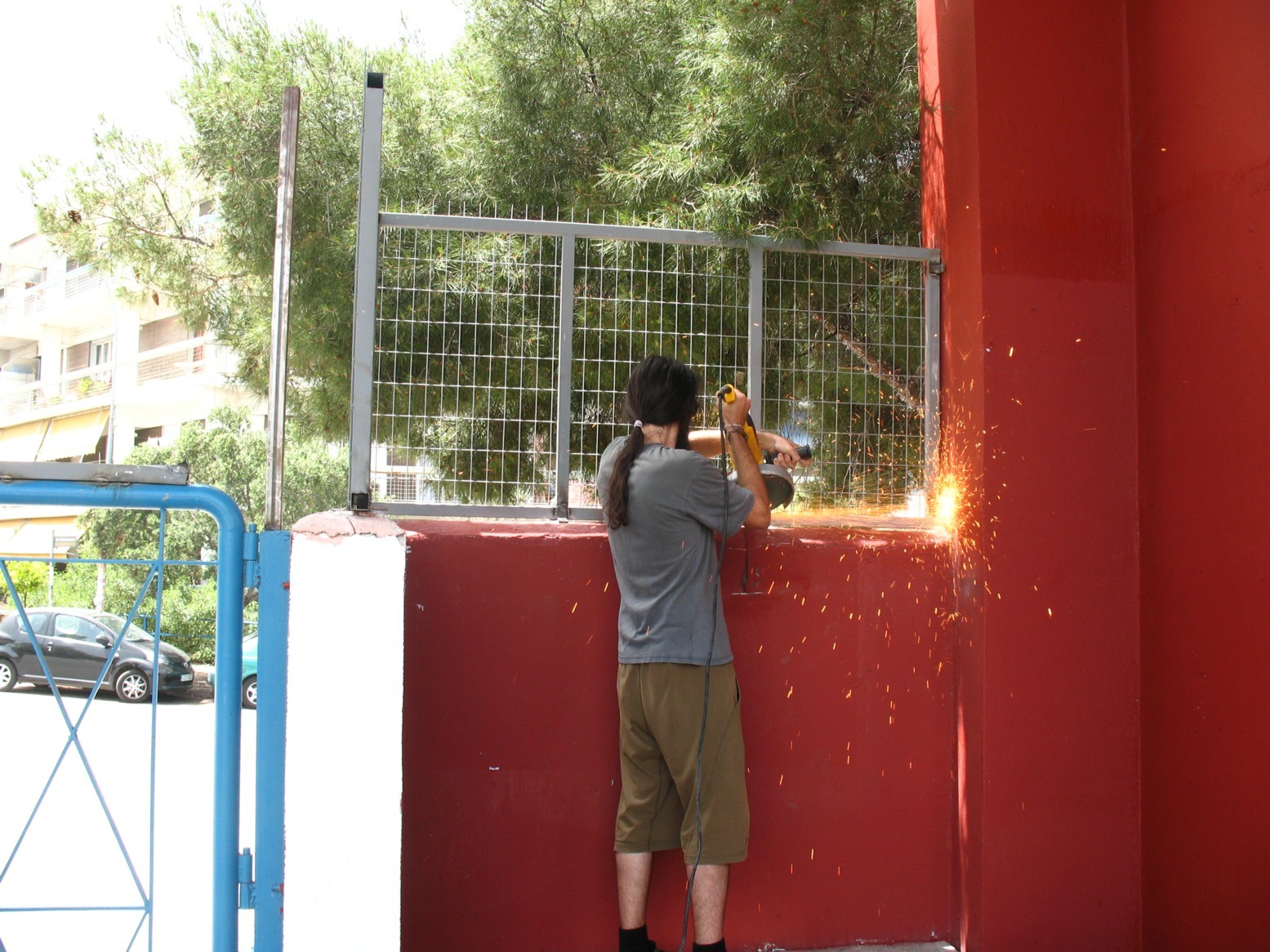 Appelate Court's expansion works sabotaged with fire (Athens, 22/5/2008)
This is a translation of a claim sent to

"In the dawn of Thursday, MAy 22, we invaded the construction site of the appelate court on Loukareos street and moved into burning up three machinery-vehicles, sabotaging the construction of the new court buildings. With this invasion we dismantled the prestige of the enemy, striking in one of the most formidable occupied spots of the city. Our action is wilful, to set the justice itself on fire. Its nature, its ideology, its institutions.

It isn't just the arrogance and vengefulness of the judges, the desolation and anger in the faces of the accused, the agony to find the money, the fear of facing prison. They are all part of this, that's for sure. Justice lies in the core of democracy. It defends with a decisive violence, directly all interests of this world. It has conscience of its role, its meaning today. It is clothed with all the democratic alibis. The rules of courts, the high-court's opinions, the laws, do not simply safeguard the regime. They are unceasing attacks with the aim to control and manage, to subordinate every moment of our lives. The 10.000 prisoners [note: the number of the greek state's prisoners], the cameras that got legalized, the strikers summoned, the asylum broken, indicate them. These are not mistakes, we don't talk about a few judges that don't do their job well. We talk of the modern martial courts that safeguard the dominant order. We speak of judges that distribute 50 years in prison, every day, and then watch watch Lazopoulos on their TVs [note: a greek populist comedian commenting on the system's faults]. And all of these, under the wrapper of independance and unselfishness. In order to shut up the questions, to blur critics, to enforce as truth, inside everyone's conscience this truth that is revealed in the threats and guilty silences.

That's because justice, apart from a mechanism of subordonation, is a tool to rearrange the social relations. Discipline, a sense of fairness, fear, are fundamental principles of integration of prohibitions on the totality of the social body. The civilization of lawfull and outlaw, of fair and injust, of good and evil, is a civilization that mutilates social relations. Is a civilization of dependency from a vengeful justice system. Its values end up to systematize justice to a machinery of individuals supervising each other. Insecurity, snitching and fear for the other, constitute behaviours of the perfection of the modern pattern of social organization. This system is n't applied only inside the court houses but also in every expression of our everyday life.

The new courthouse halls, the new high-sevurity prisons, the prohibitions that proliferate, pave the way for the future offensives. Against the administration of justice, we take vengeance on this world of authorities untill its total overthrow.

PS. Our every hit is a beat of our heart. And our heart beats fiercely close to the hearts of our captive comrades. This action is dedicated to Giorgos Voutsis-Vogiatzis, imprisoned for robbing the ETE bank in Gizi.

Few notes: There is an older action claimed for "Comando Christos Tsoutsouvis" in Thessaloniki, 2007: "On Tuesday 15 May, 22 years after the assassination of the armed guerrilla Christos Tsoutsouvis by cops, and at 4:30 in the morning, the RairRoad station local organization of New Democracy (right-wing ruling party), was tipped with a small token of our rage (1 petrol can and 3 home gas canisters were enough to nudge them reface their offices), on the last repressive operations against the rebels of the whole country's prisons."
Christos Tsoutsouvis was an urban guerrilla, member of ELA (People's Revolutionary Struggle) and Antistate Fight. He was murdered on 15 May 1985 by undercover policemen in Gizi, Athens after a shootout, succeeding though to execute three of them.

Attack against the municipal police of Ilioupoli (Athens, 22/5/2008)
From the mass-media:

"Mess and panic were caused Thursday night, when a group of around 20 persons attacked the city hall of Ilioupoli. The masked-up group suprised the policemen, throwing red paints and broke with stones the glass windows of the city hall. Then, they destroyed with batons, sticks and knifes the personal car of Ilioupoli's mayor and two patrol cars of the municipal police. According to information, the attack of these young people was a form of protest and of support to two detained anarchists. The activists left on foot, towards the central square of Ilioupoli, throwing behind them communiques against the municipal authority. The police forces realised a manhunt to find and arrest any"...

Following is a translation of a communique sent to

"We selected to attack on the 22th of May, against the municipal police and the city hall of Ilioupoli, as a signal of solidarity to the detained anarchists M. Tsourapas and Chr. Kontorevithakis, accused for attempting to burn up a car of the municipal police in P. Faliro, and facing a jury on July, 11.

The municipal police is another repressive mechanism in duty bound to keep the normal flow of consumption and hunting the so-called black market and the street-salesmen, safeguarding the profits of luxurius shops, while it constitutes yet one institution of policing in the mitropolis, against everyday petit-delinquent behaviours. The perceptions that contributed to its formation will be always a target for us, and so will be their carriers. This specific attack against the city hall of Ilioupolis is not blind at all, since this municipality through the former municipal counsellor Athanasios Kouretsis invested in the pilot project "The neighborhood's municipal policeman" in the footsteps of the failed police project "The neighborhood's policeman". This ex-cop that participated in Ilioupolis' city counsil wanted simply to contribute in the strenghening of the citizen's sense of security, as his proposal suggests. We will always stand opposed and choose the offensive way against the dogma of "Security, law and order" based on a total system of institutions and perceptions that eternalize the modern reality. Their effort to sharpen repression and control over our dignities and our lives, will now meet with the climax of our attacks.

Bank firebombed (Ioannina, 22/5/2008)
This is a translation of the claim posted on

"Today during the dawn, 22/5/08, we attacked a subsidiary of Piraeus bank on Dodonis street, close to the technical college. We hurled 4 molotov cocktails at the bank's ATM, the camera, and the main entrance. This attack was undertaken despite the constat patrols of the cops, who even passed by a few minuted before the attack. Material damages were realised against the ATM and the entrance, breaking a piece of the glass-window. This attack was clearly symbolic, so a total destruction of the bank was not an issue. We oppose every form of policing and authority and we trust in violent actions to overthrow the state. Solidarity to the actions that preceded and to those that will follow.

COMRADES FROM THE STREETS OF EVERYDAY STRUGGLE."

Students invaded halls where the rectors elections were held according to the new "frame"-law concerning universities, in the technical institutes of Athens and Piraeus, destroying voting papers, taking away ballot boxes, breaking them or throwing them to garbage. Students of DAP-NDFK (ruling party right-wing student youth) that were present, tried to guard the elections process but were repelled.

In the same time, over 35 faculties are occupied by student assemblies, against the new "frame"-law application.

Surveillance cameras were broken, during the march in solidarity to the Villa Amalias squat. The march was organised on the occasion of an arson attack against the squat two days earlier, and hundreds of people demonstrated in central Athens.

According to a report from athens.indymedia.org:

"After 12 in the morning, people from the polytechnic school self-managed infoshop leftists, students and others, gathered around Zografou gate and destroyed all the extra fencing bars placed by the dead to prevent people from entering the university late at night and during weekends. An other door was also taken, so people wan't bother to jump over fences to enter the university when it closes. Later on, some threw the bars at the door of the dean hall and at the dean's office.

While this action took place, three undercover policemen gathered outside the gates, but left when they became noticed. A riot police brigade was set outside the nearby police station of Zografou, and a person was taking photos of the people gathered from a nearby building, but left when people approached the building."

"Early in the morning of Saturday, we attacked the national bank at Triandria. This action is symbolic, a sign of solidarity to the anarchist V. Botzatzis and our three fugitive comrades. No captivity can stop the war with the Existent. Our rage will set their peaceful nights on fire.."