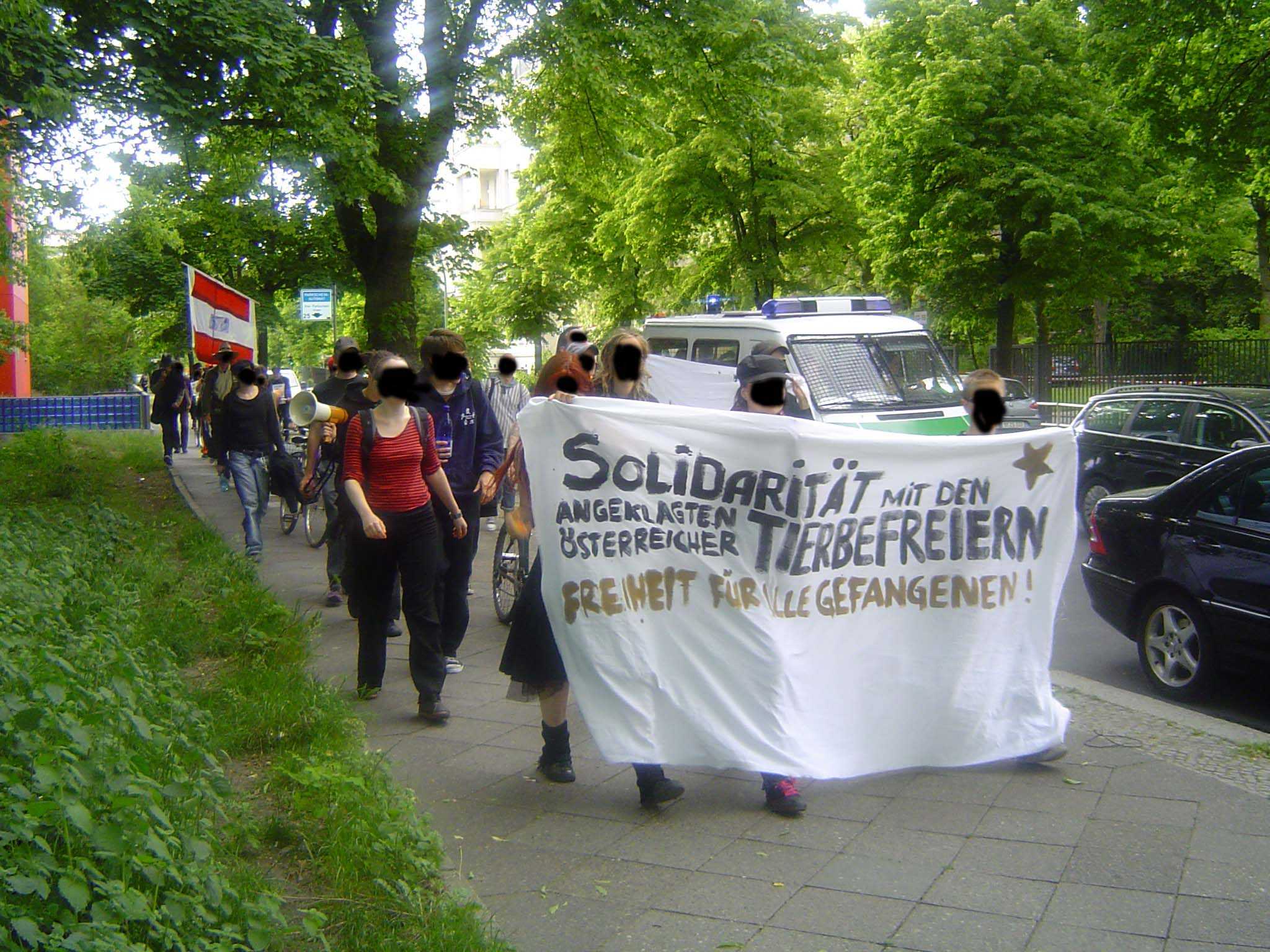 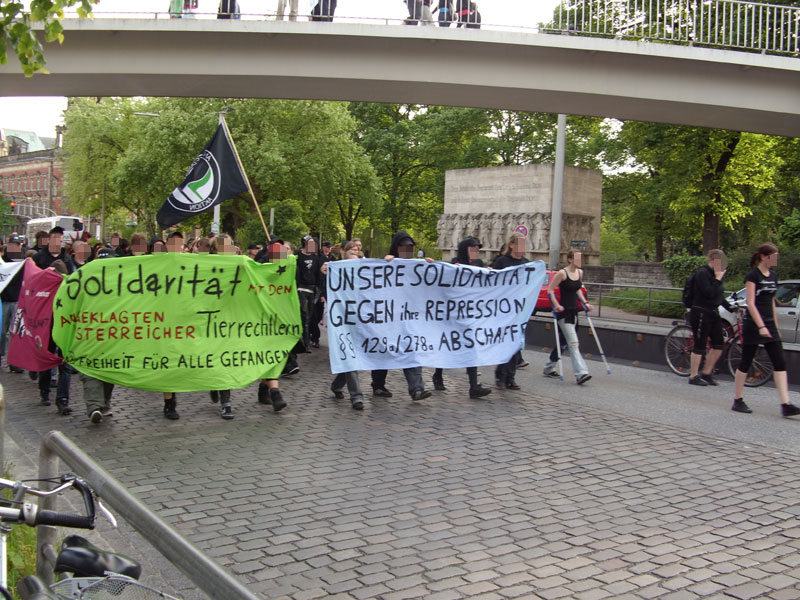 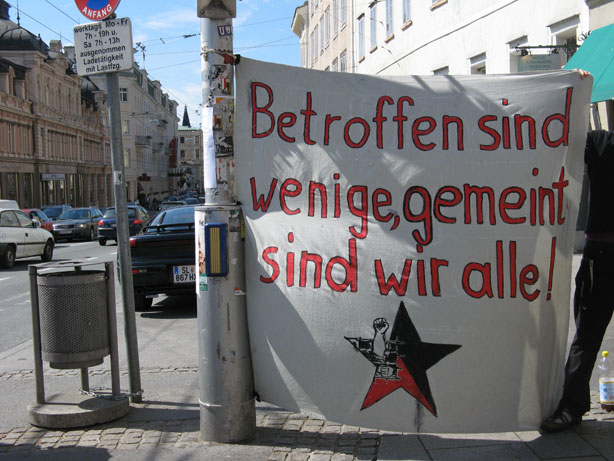 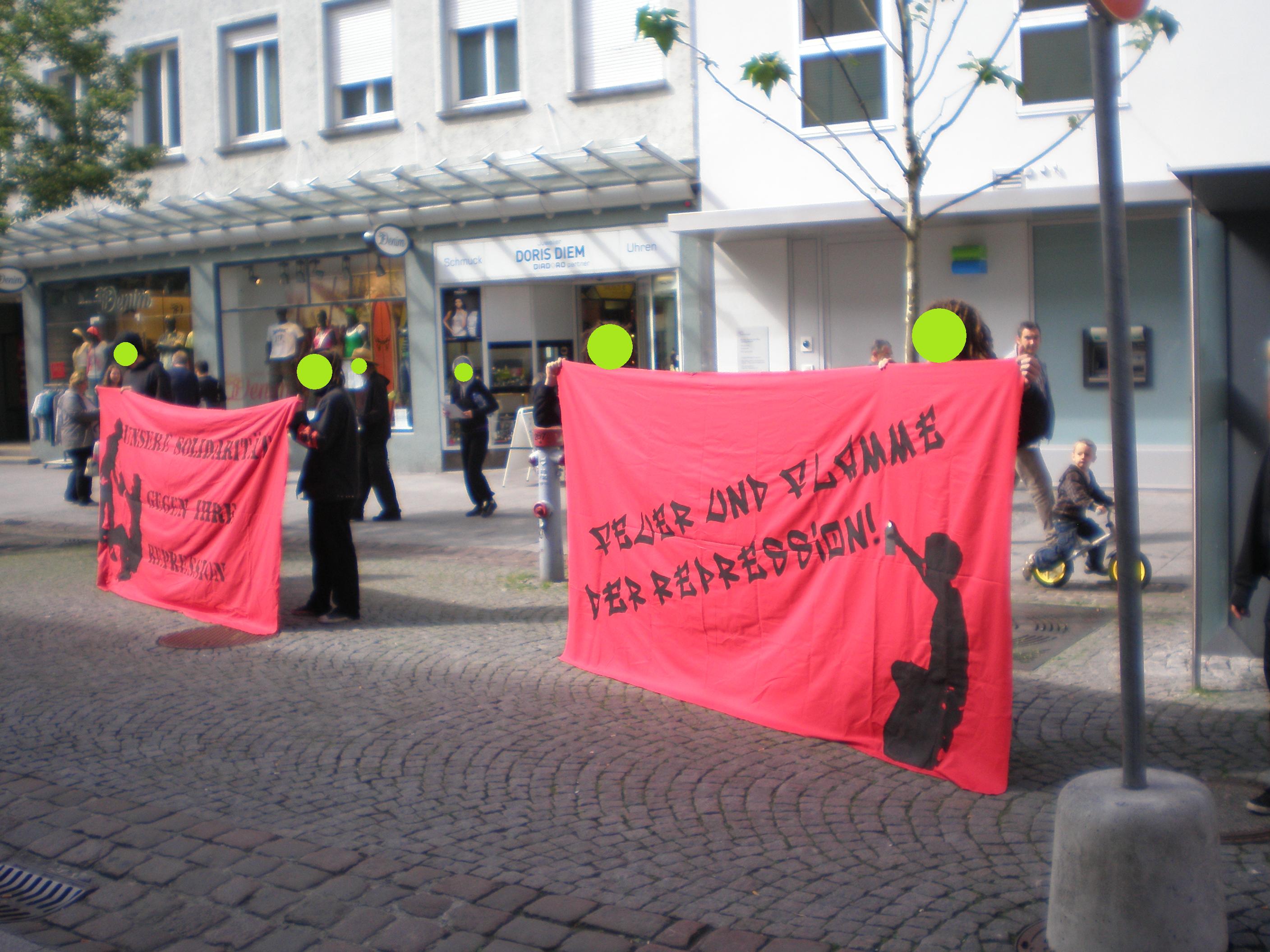 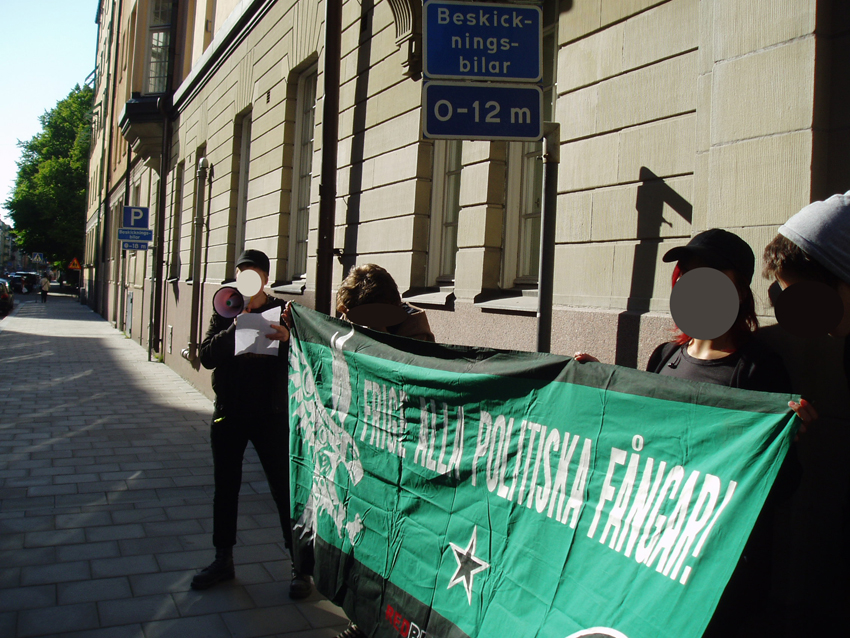 Many of the demonstrations were against Kleider Bauer, because the arrested campaigners are suspected of forming a criminal organisation against the fur selling company, under §278a of Austrian law.

Press release from the Legal Defence:

Sunday 25th May 2008: 14:30 pm
A further demonstration of solidarity before the national court in Wiener Neustadt (Austria) - more info on

http://at.indymedia.org. For the time of the rally and latest contact the legal assistance number: 0650/5926791

On Monday 26th May: 10:00 am
There will be a press conference from the legal assistance at the press room of the Green Parlamentary Club, located Löwelstraße 12, on the second floor.

"according to latest news, police couldn't find anything, people are still arrested and have not been given a reason for it. head of austrian vegan society is denied access to his lawyer and therefore started a hunger strike. i'm thinking about protesting at the austrian embassy in london if nothing will happen"

"Austrian media reported Saturday that one of the suspects has begun a hunger strike while in custody. Investigators claim the suspects used various aliases and allegedly had links to an international network."

June the 4th has been called as a global day of solidarity with the Austrian Activists, one of whom is now on Hunger Strike!

There will be cyber actions, protests at embassies and demos across Europe directed at the Fur Indistury....repression affects us all, so don't wait until it is you who is incarcerated before taking action because by then it'll be too late!!!

some additional informations to the people in prison


homepage of the solidarity movement and legal team:

the latest things happened, was that they again moved some of the activists to other prisons in smaller cities to split up the solidarity demonstrations and actions...

In the meantime all 10 animal rights activists have been remanded to pre-trial detention without the possibility of bail. Nine of them are in the jail in Wiener Neustadt (right next to the Wiener Neustadt courthouse). One person is still in jail in Innsbruck – rumors about a possible transfer to Wiener Neustadt have not been verifiable up to this point. The next evaluation of the detention will probably take place in two weeks; at this time the only thing that will be decided on is whether the current detention will continue or whether the prisoners will be released.

The legal support has deliberately decided not to release any names or affiliations of the imprisoned persons until it has been cleared with them. We ask you to do the same out of respect for the prisoner’s right to privacy.

Out of experience it takes a long time for letters to reach people sitting in detention jails – nevertheless it is important to write to the prisoners and show them our solidarity. It is important to think about the fact that the letters will be read by the prosecutors. Therefore do not write anything that could incriminate those in jail or have a negative influence on their proceedings. Search in the internet for tips on writing to prisoners.

We demand the immediate release of the prisoners!
Only a few are directly targeted, but we are all intended targets!
Together we are strong! 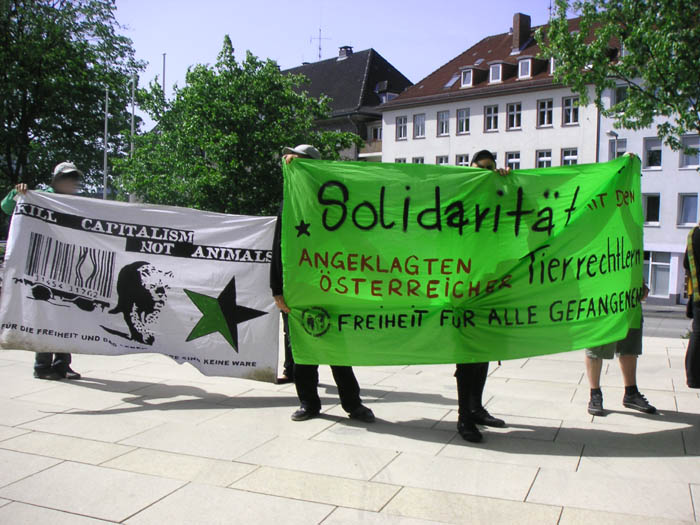 Information Update from the Legal Support Team (May 28, 2008)

Ten animal rights activists having been sitting in pre-trial detention jail for over a week. Their detention is grounded on the charge of “Forming a Criminal Organization,” under §278a StGB (penal code). The next date on which further internment in the detention jail will be decided upon will take place either on Friday, June 6 or on Monday, June 9. Until then there is little to no hope that the prisoners will be released.

Today a few of the prisoners were moved from the detention center in Wiener Neustadt to Vienna (Justizanstalt Josefstadt) and Eisenstadt respectively, without any reason and without notifying the attorneys. We can only speculate as to the reasons – the prosecutors ramble on about the danger of destruction of evidence – but we believe the intention is the scattering and splitting up of the protests and demonstrations in front of the jail in Wiener Neustadt.

We refuse to allow ourselves to be intimidated by this new attempt at repression, and we will not stop letting the imprisoned animal rights activists know that we will not abandon them and will continue to support them.

We will continue to travel to the jails – solidarity is more than just a word!

Because some of the prisoners were moved, the addresses for writing letters have also changed. Because we cannot assume that the prisoners will stay in any one certain place, we ask you to send your letters to the prisoners in an envelope (first name is sufficient and if you do not know the people, then you do not need to address it to anyone), and then to send this in a further envelope to Antirep 2008, Postfach 101, A-1070 Wien, Austria (EU) and we will forward the mail on to the prisoners.

Some of those imprisoned do not want their names published, we accept this and ask you to take consideration of this fact as well.

Thank you for your understanding!

Some activists are now as before on hunger strike, others have obtained vegan food in the meantime.

Background to § 278a StGB can be found on the solidarity site: