In the media I read that Berlusconi’s company mediaset mid 2007 has taken over Endemol: one of the biggest mediaconcerns on the world market…
Do we have to worry in Europe?

If you want to know WHAT won the Italian elections and who controls OUR media.
Read and shiver… 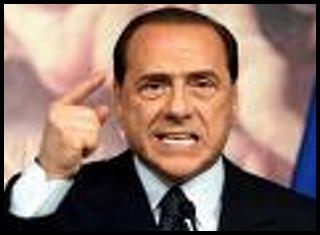 Did you know that Berlusconi's media imperium has been expanded with
one of the major media concerns ( Endemol ) in the world?
Why didn't we read anything about that in our media?
This happened mid 2007.
Did you notice that latest years investigative journalists are a dying race?
Maybe it's not a bad idea to draw a clear map of the current media concentrations in the
world.

What has been happening in Italy over the last 15 years, has already started happening in other European countries now.
It's not a coincidence that Berlusconi, during the 'Mani Pulite' operations decided
to 'dedicate' himself to politics.
This gentleman only objective is to polarize and disrupt society for his own comfort.
Divide and rule...

Silvio Berlusconi and his organization have understood very well that if you control the media,
you can act undisturbed.
And the Italian media is continuously controlled and being manipulated.
Headlines have as only scope to spread fear and insecurity , to provoke intolerance and
to divide, antipolitics is daily business ( see the election results in Rome and even Londen, both based on irrational fear )

Indro Montanelli was a monument of Italian journalism.
He was director of 'Il Giornale', respected by left and right, and a vigorous anticommunist
and conservative.
When Berlusconi 'dedicated' himself to politics, Indro had to change his editorial line.
But Indro was a man of principles and if there's something that makes Berlusconi nervous,
it are people with principles, left or right doesn't matter.
Indro had to resign and the director of 'Il Giornale' is now Paulo Berlusconi.

Indro predicted already at that time the current faith of Italy .
He saw Berlusconi as a dictator and a threath for mankind and free press .
He described him as a cancer that keeps on spreading , Berlusconi was for Indro evil in person .
In one of his books he referrered to Berlusconi as the foam that floats on the surface of the
cesspool .
Well, it's this 'foam' that already NOW decides what we and our children get to see
on TV, internet, newspapers, magazines , movie theaters and so on.

Shouldn't our European parliament members get worried about this 'foam'?
Isn't it urgently time to act?
Do we want to follow in Europe the 'democratic' roadmap of Mr Berlusconi and Putin?

If you want to know WHAT won the Italian elections:
Here's a report of facts and quotes of Mr. Berlusconi himself one week before the elections.
This man cannot be suspected of any political or ethical principles.
Read and shiver...

Help Europe: Silvio Berlusconi is taking over the European media