Sunday 15th June at the Star and Shadow Cinema

A day full of films and workshops from the UK and around the world that will tap into the visible and invisible voices behind bars. 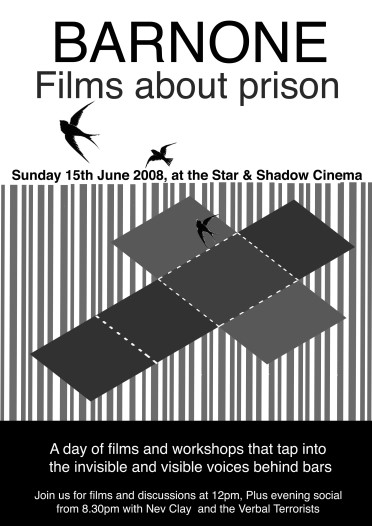 Sunday 15th June at the Star and Shadow Cinema


A day full of films and workshops from the UK and around the world that will tap into the visible and invisible voices behind bars.


12 am: Short interviews with California ex-prisoners. Three very different people talk about their personal experiences of the USA prison system and their struggle to re-built their lives.

12.20 am: Life Inside Out, (USA, 2005, 72 minutes) by Sarah Zammit
This insightful documentary goes inside the walls of Grand Valley Institution, one of five federal prisons for women in Canada. Life Inside Out features three unforgettable women, doing time in an arbitrary system designed to frustrate and baffle.

Criminal Injustice: The other side of death row in the USA. A talk by Trish Abbot, social activist and campaigner against the death penalty in Philadelphia, USA.

This is a striking documentary about the lives of four Palestinian women political ex-detainees, depicting their struggle and torture suffered during their years of imprisonment as women in Israeli jails.

Trevor (Mayday Magazine)- Trevor, an ex-prisoner and prison abolition activist, will take us through a chronological journey of prison struggle in the UK.

4pm: Inside Film, made by Wandsworth HMP prisoners, is the first film project produced and directed by UK prisoners.
Who Am I? (7mins) A short film that makes connections between personal identity and society.
The Wandsworth Way (16 mins) This documentary traces the progress of the Inside Film project.

The film features ex-prisoner and activist, Mark Barnsley, talking about the privitasation of British prisons and ways of struggling against that system while imprisoned.

Mark Barnsley will facilitate a discussion about how we can support prisoners in our communities and practical ways of resisting the expanding prison-industrial complex.

Campaign against Prison Slavery will share their insights into the exploitative prison labour conditions in UK prisons as well as talk about their campaign.

Written by Laurence McKeown, former volunteer in the Provisional IRA. The film is set in the H-Blocks of the Maze Prison in the North of Ireland and explpres the events leading up to the 1981 Irish hunger strike and the subsequent developments in the prisoners' struggle for Prisoner of War status.

Join us for films and discussions at 12pm and evening social at 8.30pm.

Price for the day: £4 (£3) Ex-prisoners and asylum seekers free. No one will be turned away for lack of funds.