The Citex squat in Amsterdam has recently been illegally evicted.
On friday night, there was a birthday party. The police claim that there was a noise complaint from a neighbour, and asked for the identity papers of a person in the squat. They have no legal right to ask for this since the space was not public space but a residence . Afterwards, they tried to arrest this person. The person was de-arrested and took inside by the squatters. From this point on, the police escalated the situation, leading to the eviction of the entire block of 4 houses and the citex social spaces. 51 people were arrested and roughly treated. Currently , there are a few people still inside prison, but most people have been released. On Sunday, there was a demonstration that first passed by the heavily guarded (with dogs) citex-block, where it was made clear that we were not happy. Later, windows of the mayor's house (Job Cohen) and of city hall were smashed. The previous night, the windows of the housing company were also smashed. Because this was an unexpected eviction (citex is still in legal processes and the court results are due on thursday), all people's belongings were still inside. On Monday, the people could luckily get their stuff back through a moving company who took it out. The people were not allowed inside, and there was security, dogs and police all over the area. Riot police and undercover police (civilian clothed arrest teams) arrived many times for no clear reason except to provoke.
For more updates and stories look on

http://www.indymedia.nl
Most stories are in dutch for now, english versions will come soon.
An english personal account of someone 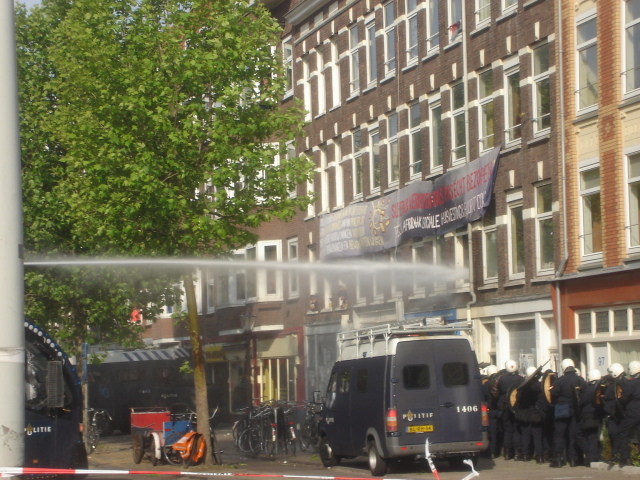 This sudden action by the police, is an unusual escalation of the normal squatting situation in Amsterdam. It happens as some right wing politicians have been pushing for the removal of the right to squat unused properties, and the police have been playing a media game against squatters.

The police eviction of Citex was certainly illegal, and yet the Mayor has chosen to stand behind the action. It was squatted and not scheduled for eviction as there had been no court ruling yet. If a residential building has been empty for a year and is squatted the onus is on the owner to prove they are going to do something with the building if they want to evict the squatters.

In a country with a high population density this policy has certainly prevented many buildings being left unused - due to neglect (usually by housing corporations) or because of speculation (usually by businesses with a "colourful" background).

When a court case is lost by the squatters most properties are left empty within the notice time and the owner retakes possession. In the past some places, usually popular social spaces or linked to them, have been defended. For many years in Amsterdam properties that have somehow been selected by the police as more likely to be defended have been evicted in (approximately) 4 monthly full day outings by special police units, the ME.

Decades past have seen some serious attempts to defend properties - burning barricades, bridges defended, cobbled streets pulled up. Recently, there hasn't been anything quite like that. The worst the police have suffered is in the last year is paint bombs. This hasn't stopped them creating a serious media war. They have pushed a line about how dangerous the squatters are, feeding stories to the press about 'boobytraps' and weapons which have proved to be false after the headlines have passed. They have also been increasing their numbers for trivial evictions.

On the Monday after the weekend eviction of the Citex there was a scheduled lobby of the local council meeting about another squat in the area. This popular squat has seen many visits to the council, with some serious campaigning by local residents (squatters and renters) to keep it. This isn't uncommon for the area which has a legalisation campaign for another squatted social center. The police reaction to this was a high profile ME presence by the council buildings (water cannon and police units) and large numbers of 'romeos' in the neighbourhood (plain clothed police to arrest people).

Today the Mayor of Amsterdam has again defended the eviction in a letter to a commission looking at it saying that the Police were correct to arrest the first woman who refused to give ID to them. The rest was escalated by those who came to help!

The Green Left party has stated they don't accept this explanation of events, and want Cohen to be properly grilled about it.