Press release from the campaign to stop the deportation of Hicham Yezza, about the demonstration in defence of academic freedom and in support of his campaign. 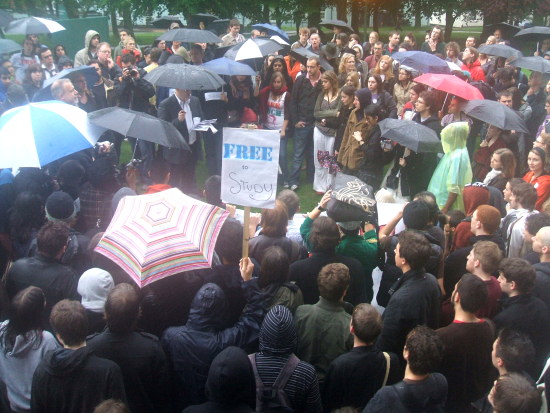 Today [28/5/08] at the University of Nottingham academic staff gave a public reading from an Al-Qaeda training manual, outside the Hallward Library, University Park Campus. The demonstration expressed the outrage amongst staff and students after two innocent members of the academic community were arrested under ‘terror’ legislation in connection with this document, downloaded from an official US government website. Strong concerns were voiced over academic freedom at the university, in addition to a focus of support and solidarity with one of the arrested, Hicham Yezza (1). Hicham is an employee (2) within the School of Modern Languages, who is now facing imminent deportation on Sunday 1st June (3).

(1)Hicham’s arrest took place on Wednesday 14th May. Rizwaan Sabir, an MA Politics research student was also arrested. Both were released without charge six days later. It has subsequently become clear that these arrests, which related to so-called “radical materials” involved an Al Qaeda manual downloaded by Sabir from an official US Government website, as part of his dissertation research into political Islam, and emailed to Yezza for printing.

(2)Hicham is employed as PA to the Head of the School of Modern Languages and Cultures, Professor Lesley Milne.