Activist hang banner at UK GM trial lab; activists opposed to the BASF trial of GM potatoes have hung a banner and occupied part of the grounds of the National Institute of Agricultural Botany (NIAB) in Cambridge. 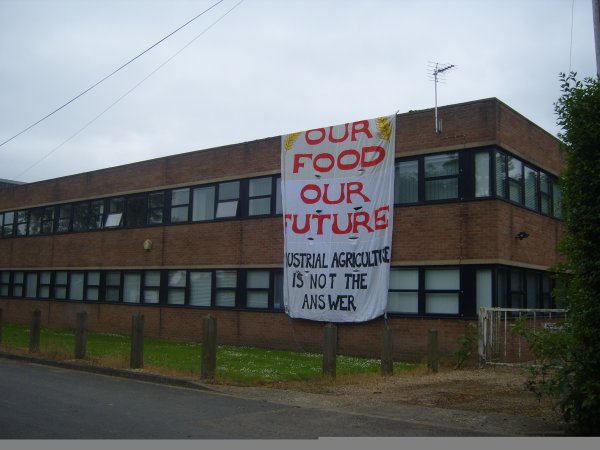 Environmental protestors from Earth First! UK today staged a peaceful protest at the laboratory and offices of the National Institute for Agricultural Botany (NIAB), in Girton, Cambridge. About a dozen activists invaded the site and hung banners from buildings in protest at a trial for genetically modified (GM) potatoes being carried out at the Institute by BASF2, a German based company.

The protest was timed to coincide with a national day of action on food and climate change3 and with the United Nations Food and Agriculture Summit, being held this week in Rome.

“Today’s protest was staged to send a clear message to scientists, companies and politicians across the world; that message is that genetically modified food is not the answer to either climate change or world food shortages and we stand here today in solidarity with the many farmers and local food producers across the world who are speaking out against GM crops.

“In recent months, scientists have been pushing and pushing for more GM crops to be grown, claiming they are the solution to many of the problems we face today. However, their claims consistently ignore the social and environmental impacts of GM crops, which include the vulnerability of crops to disease as global agriculture becomes more industrialised and less genetically diverse, as well as the impact of tying food production even closer in to big business and global corporations. We firmly belief that the increasing industrialisation of agriculture benefits neither producer nor consumer and we need to look to a future of low-input, diverse, local food production.”

“The GM trial at NIAB is being conducted under siege-like conditions with high levels of security, including a permanent security personnel presence, high metal fences, alarms and floodlights. The fact that this trial is taking place under such conditions clearly demonstrates the contempt in which the people of this country hold the development of these crops.”

The BASF potato trial at NIAB is one of only 2 outdoor field trials taking place in the UK this year and is a trial for blight resistance in GM potatoes; a further trial for nematode resistance is taking place near Leeds, under the auspices of Leeds University and has also met with local opposition.