A lively demonstration in Walthamstow, London on Sunday 1 June, 2008 used tomatoes donated by market traders to express opposition to the council and developer St Modwen's plans for the development of the long-empty 'Arcade' site. Pictures (C) 2008, Peter Marshall. All rights reserved. 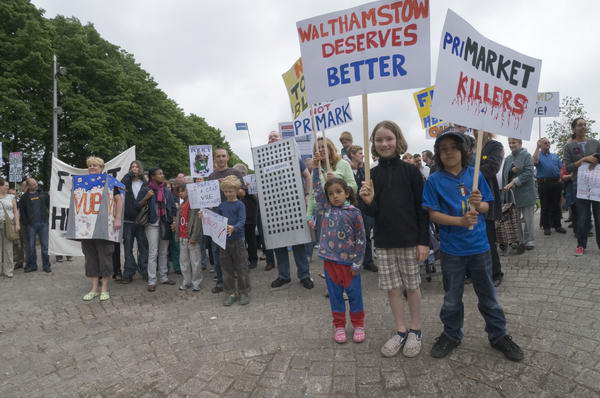 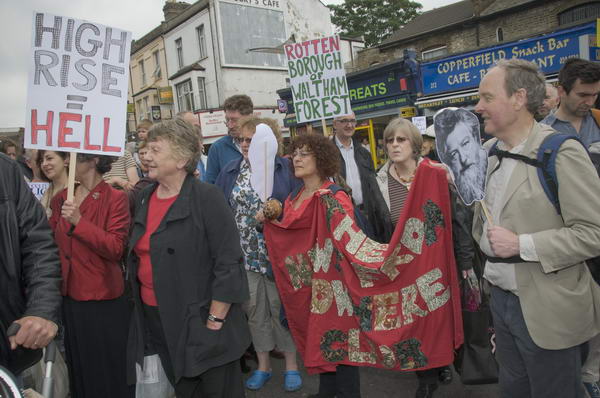 In the High Street 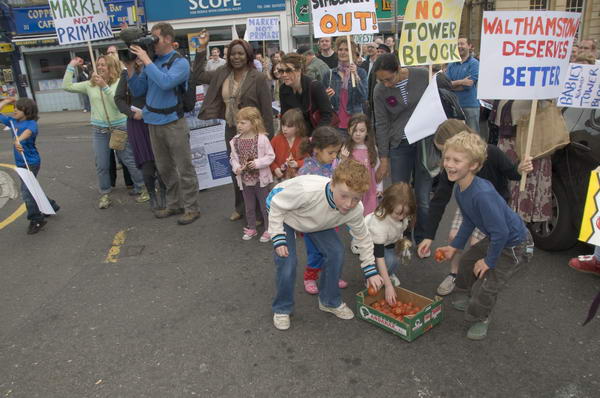 Tomatoes donated by the market traders 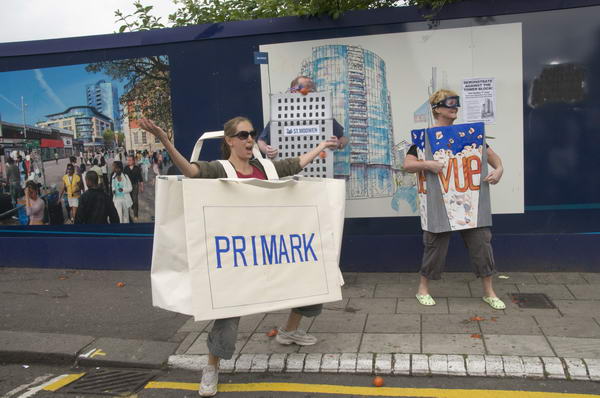 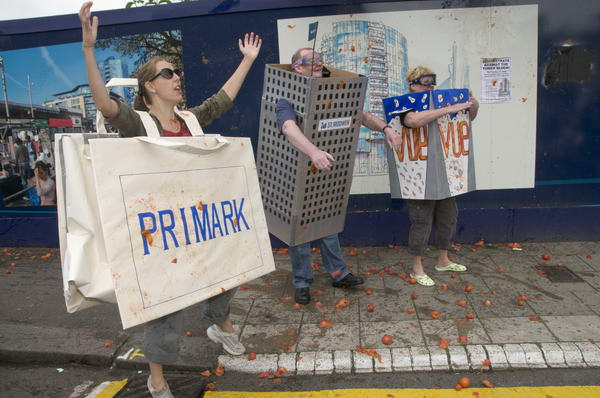 And were followed by many more

On the blue fence surrounding the still undeveloped Arcade site at the top of Walthamstow High Street, developers St Modwen proudly claim to be "The UK's Leading Regeneration Specialist" but local residents in Walthamstow clearly have a different opinion, and have come together as 'Fight the Height' to oppose their plans.

When demolition took place in 1999, the council announced their intention to put the site to cultural use and benefit the community - a new leisure centre, library and arts centre together with social housing. Instead the proposals by St Modwen appear to be dominated by commercial interest and to have little regard for local needs.

The site is as the east end of Walthamstow's famous street market, the longest in Europe (more like 1.2km than the mile usually claimed), which began in 1885 and attracts shoppers from across London and tourists from around the world as well as being a vital local resource. St Modwen's plans include a large Primark supermarket, which would severely threaten the future of the market and many of the shops along the high street.

Another ingredient is an 18 storey tower block, quite out of scale with the surrounding area, with its terraces of two storey housing and small scale developments. But you can fall out of bed and into Walthamstow Central station, making the flats very marketable to workers in the City (4 trains an hour to Liverpool Street in 17 minutes) or the West End, thanks to the frequent Victoria Line service. Ten more tall blocks are also in council plans for the next station on the line, Blackhorse Road.

Close to the site on Hoe St is the former Walthamstow Granada, opened in 1930 as a "super-cinema" in high Art-Deco style. As well as films, it hosted live performances (by The Beatles, The Rolling Stones, Chuck Berry, Buddy Holly and many more) and is now a Grade II listed building. Carefully converted into a three-screen venue in the 1970s, it became part of the Odeon chain and in 2000 was sold to EMD, finally closing in 2003. A campaign was set up to restore it as a cinema, but the proposed building of a Vue multiplex on the Arcade site would end any chance of this happening.

You can keep in touch with the campaign and find out more about St Modwen and the plans on the 'Fight the Height' and 'Antiscrap' web sites.

Fight the Height supporters were leafletting when I arrived on Sunday morning for the demonstration which began at noon, with characters representing the tower block, Vue cinema and Primark, along with various placards and banners, attracting considerable interest, although Sunday is the one day of the week that the market closes, so the High Street was fairly empty except for the Farmers Market.

Around 12.30 the crowd of about a hundred people walked from Town Square (a regenerated area that already seems to need some regeneration) across to the Arcade site and the fun began. Market traders had donated several boxes of very ripe tomatoes and kids and adults enjoyed the forceful gesture of throwing these at 'Tower Block', 'Vue' and 'Primark' to robustly demonstrate their opinion of the St Modwen proposals. It was a short but rather messy protest - and one that made the TV London news in the evening.

St Modwen are also the developers for the contested Queens Market scheme at Upton Park, which, if it goes ahead, will mean an end of the thriving and ethnically diverse market there, again by building a supermarket and a tower block. It looks very much like a "one-size fits up all" approach to profit rather than regeneration.

More pictures of the event on My London Diary: