On June 2, some 150 demonstrators protested in the Market Square in Nottingham, England to oppose the imminent deportation of Amdani Juma. Another demonstration was held the previous Saturday in the town. 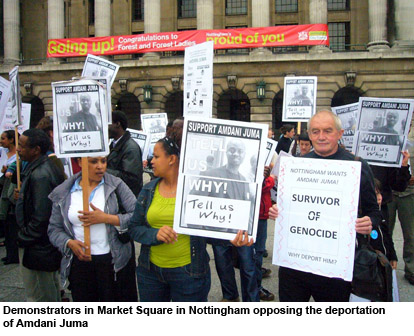 Juma is scheduled to be deported to Burundi on June 4 from Heathrow Airport in London. Amdani fears that his life will be in danger. He is currently being detained at the Lindholme detention centre near Doncaster in South Yorkshire.

The demonstration included many of Amdani’s friends and work colleagues and was addressed by local Labour Party Member of Parliament Alan Simpson. Other speakers included the Nottingham representative of the Refugee Forum.

Amdani is of mixed Tutsi and Hutu parentage and was evacuated to Kenya by United Nations troops during the 1994 Rwandan genocide, when an estimated one million people were killed.

When he returned to Burundi he was held captive, beaten and placed under surveillance. He fled Burundi in February 2003 when some of his friends were killed by government militia because of their political opposition. Amdani has no immediate family in Burundi and most of his close relatives are dead or reported missing. He has a sister who has refugee status in Holland and two cousins in the UK.

In March 2003 he applied for asylum in the UK. The claim was refused, but he was granted three years’ “humanitarian protection,” lasting until May 1, 2006. Following that date he applied for Indefinite Leave to Remain. After a 15-month delay, this claim was also rejected.

Another appeal was then made to the Immigration Tribunal under Article 8 of the European Convention. This article calls for respect for the private life of individuals. The tribunal rejected the appeal on December 24 last year.

Amdani was accompanied to court by more than 50 people to hear the verdict of the tribunal. Many of these attempted to provide witness statements to the court as to why he should be allowed to stay in Britain.

On May 30 he was detained by the immigration authorities.

A spokesperson for the Friends of Amdani/Nottingham and Nottinghamshire Refugee Forum said of his detention: “He turned up to sign on and was detained without any warning with just the clothes he stood up in. He wasn’t even allowed to say goodbye to his friends who were waiting for him outside the signing centre. Amdani is an exemplary citizen and a truly good person. We want him to stay in Nottingham.”

Over the last five years Amdani has worked for both the Refugee Forum and the Terence Higgins Trust, an AIDS charity. He also set up his own organisation, the African Institute for Social Development, which provides information on the prevention of HIV/AIDS. He was involved in campaigns such as the National African HIV Prevention Program and the African HIV Policy Network.

Many of those he has helped are fellow refugees and asylum-seekers, and he was prominently involved in the National Refugee Integration Forum and in Refugee Action. In Nottingham, he worked for the Nottingham Council Tenants’ Forum and advised Nottinghamshire Social Services and other East Midlands bodies on asylum issues.

Since 2005, Amdani has been employed as part of the Integration Support Team at the Nottingham and Nottinghamshire Refugee Forum. He was also a member of the Home Office-run National Refugee Integration Forum, working for the organisation from 2005 until March 2007.

Supporters of his campaign say that due to his experience and fluency in five languages, he is very important in the field of HIV prevention work in the city. Amdani was recently involved in the campaign to stop the deportation to Algeria of University of Nottingham staff member Hicham Yezza. (See “Britain: Oppose deportation of Hicham Yezza”)

On June 2, Amdani released a statement which asked, “What will be the impact socially and mentally of my detention on other refugees? When people arrive here having often witnessed terrible things, it is hard to integrate and heal. I have worked with others to tell them to learn English, find work, look after each other, integrate with your neighbour, drink tea and eat together. We have found places for them to dance, eat and talk and this helps the healing process.

“My fear is that if I, who have added English to my spoken and written languages, carried out paid and voluntary work, campaigned for integration, involved myself in community groups, sustained my tenancy, always operated within the law... am not safe, who is safe? What is the message being sent to these communities?” (

The Socialist Equality Party and the International Students for Social Equality (ISSE) demand the release of Amdani Juma and a halt to the plans to deport him. We defend his democratic right to live in Britain without fear of harassment and intimidation from the immigration authorities.

The ISSE spoke to a number of those protesting at the demonstration about the cases of both Amdani Juma and Hicham Yezza.

Jessica, a University of Nottingham student, said that she became aware of Amdani Juma’s plight when her boyfriend read about it on an Internet blog. “I then went onto Facebook and saw all about the campaign here,” she said. “I count myself as an ethnic minority, as my Dad is a Greek Cypriot. I was at the demonstration in support of Hicham Yezza. I think they want to get him out because he is not white. He has been here 13 years. The university just called the police, even though the tutors said they would have OK’d what had been downloaded by the student to research.”

Nidal is a member of the Palestinian Society and spoke about the background to the arrests last month of Rizawaan Sabir and Hicham Yezza of the University of Nottingham.

He told the ISSE: “In November, Rizawaan Sabir was arrested on the campus while protesting against the wall in Palestine. A few months later we did another protest about freedom of speech on campus, because of his arrest on the campus. He was also very vocal on that protest as well.

“Regarding Amdani Juma, he is someone who cares about the community and democratic rights. So someone who is active and cares about things gets picked up. Someone who doesn’t care about anything is left alone. He is guilty of compassion. That is the same as Hicham Yezza. He was so active, everyone on campus knows him. That’s why there was so much protest.

“Amdani was involved in Hicham’s protest. He came along and wanted to give us some advice and help us, and then a few days later he is arrested himself. You can’t say it is a coincidence anymore. There is a connection between them.”

Patrick, who does volunteer work at the Refugee Forum in Nottingham, said of Hicham Yezza: “I think it is a real indictment of the University of Nottingham that it was cooperating with the police and the immigration authorities in victimising one particular guy. They didn’t respect any of his rights. The whole government attitude is that they are bent on deportation. All this is playing into the hands of the far right.

“I think a lot of people really want to see refugees and asylum-seekers and immigrants treated with respect. For them, the Labour government does not act in their name or the country’s interest. They are just creating a more divisive society and more fear. I didn’t know Hicham personally at all, but I really think he has been terribly treated. It is an embarrassment and makes me ashamed to live in this country.

“I couldn’t make it to the Hicham Yezza demonstration, but saw the coverage on TV. The number of people, staff, academics who were there is testament to the fact that there is a real groundswell of opinion against this police mentally on the part of the university. I think it is a real blot on Nottingham University’s reputation.”

Jeff said, “Amdani Juma has been involved in the Nottinghamshire Refugee Forum heavily in the recent years and is a much liked and respected character. Hicham Yezza is someone I am familiar with as being active in Nottingham. His ongoing detention is worrying and abhorrent.

“He is someone who contributes to the political vibrancy of the area and of a university community. And I know that he was very peaceful in his activism. Everyone knows his detention is ridiculous.

“We have to remain loud and vocal and we need to push forward and put a lot of pressure on the university and the Home Office.

“I agree with what you say. Our civil liberties are being attacked. I think it is still racially targeted. We still think we are safe if we happen to be white and British, but it is not far away for us because the link is now being made between political activism and terrorism. It is here in front of our eyes. We have been expecting it. It is happening now, so we should take note and take heed and take action.”