Obama's "fierce" critiques of Rev. Jeremiah Wright and Father Michael Pfleger puts him in opposition to the sentiments of "millions of black people" and puts him in the camp of those "who view the majority of black pain as illegitimate." By pursuing an agenda that refuses to recognize "black" or "white" issues, Obama is playing with a 400-year-old fire. 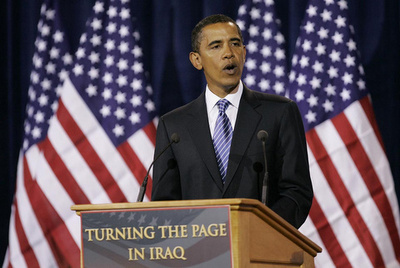 What most shocks the 18-year-old Nigerian immigrant author is Barack Obama's "acquiescence to forces of white supremacy" - a reflexive reaction by the Illinois senator that has caused him to disrespect his African American constituency. Obama's "fierce" critiques of Rev. Jeremiah Wright and Father Michael Pfleger puts him in opposition to the sentiments of "millions of black people" and puts him in the camp of those "who view the majority of black pain as illegitimate." By pursuing an agenda that refuses to recognize "black" or "white" issues, Obama is playing with a 400-year-old fire.


"Most shocking is Obama's acquiescence to forces of white supremacy."

Barack Obama: "The black candidate," "The candidate who happens to be black," "The post-racial politician," "The Rock-Star nominee," "The liberal-Senator," "The likable/beloved/lucid/articulate contender," "The once-in-a-lifetime phenomena," is playing with super-heated, blistering, searing, 400-year fanned fire. Let's hope he doesn't get burnt.

The senator from Illinois has prided himself in running a "race-neutral-strategic-candidacy." This politically calculated decision, while disingenuous, has garnered enormous commendation from white pundits and middle-class blacks, who view the majority of black pain as illegitimate, and seek to use an Obama presidency as a counterpoint against civil/human rights advocates. Most shocking is Obama's acquiescence to forces of white supremacy. Those who foolishly accept the notion that Obama, as president, would alleviate the problems of racial discrimination, police brutality, wrongful imprisonment, dilapidated public schools, wealth inequality, etc., seem to have not taken the candidate seriously when he said there is no "black" or "white" problem.

From the beginning of his candidacy, Sen. Obama made it unmistakably clear that his campaign would respond in a "talk-to-the-hand" format to those blacks and browns who did not see things his way. Before long, it became apparent how far he would go to win the precious white vote. On February 10, 2007, the date set for Tavis Smiley's annual "State of the Black Union" forum, Barack Obama was invited to join a panel of black scholars to speak on issues including the terrorizing of black people. Obama claimed to have a scheduling conflict. As it turned out, February 10 was the day Obama announced his bid for the presidency.

"It became apparent how far he would go to win the precious white vote."

"Obama is a very decent, brilliant, charismatic brother. There's no doubt about that. The problem is that, he's got folk who are talking to him, who warrant our distrust, precisely because we know that him going to Springfield the same day brother Tavis has set this up for a whole year - we already know then, that him coming out there is not fundamentally about us. It's about somebody else. He's got large numbers of white brothers and sisters, who have fears and anxieties, and he's got to speak to them in such a way, that he holds us at arm's length enough, to say he loves us, but doesn't get too close to scare them off. So he's walking this tight rope."

To make plainer his position on "black-only" issues, Obama again failed to appear at the 2008 "State of the Black Union." This time around, the senator offered up his wife for attendance, a proposition Tavis Smileys rejected.

Adding fuel to the fire, Sen. Obama would once again cause black people to question his regard for the slain leaders of the race. On April 4, 2008, while Senators' Hillary Clinton and John McCain were milking the opportunity to pay tribute to Dr. Martin Luther King Jr. in Memphis, Mr. Obama chose to speak 400 miles away, in Indiana. Obama's failure to honor Dr. King on the anniversary of his death, was shocking. Prof. Cornel West was quick to register his displeasure. In a blog posted the same day, West wrote:

"I want to say that I'm deeply disappointed that my dear brother Barack Obama decided not to go pay tribute and lay his wreath for the great Martin Luther King, Jr. That brother Martin's profound love and deep sacrifice for black people, America and humanity is in no way reducible to political calculations, even for the campaign for presidency. That Martin Luther King Jr.'s deep commitment to unarmed truth and unconditional love can in no way be subject to strategies for access to political power. Hence, I have a very deep disagreement with my dear brother, Barack Obama - in this case, commitment to truth is in tension with the quest for power."

"While Senators Hillary Clinton and John McCain were milking the opportunity to pay tribute to Dr. Martin Luther King Jr. in Memphis, Mr. Obama chose to speak 400 miles away, in Indiana."

Nothing in Obama's conduct comes off as more cowardly and nonsensical than his censure of Rev. Dr. Jeremiah Wright on April 29, 2008. This spectacle would not be Obama's "last hoorah" in his campaign against those who disagree with his distorted version of racial realities in America.

This past week, we witnessed a concerted effort by the mainstream media to tip-toe around the issue of "white entitlement" as highlighted by Chicago's Rev. Michael Pfleger. Instead, corporate media categorized Rev. Pfleger's satirical skit targeting Hillary Clinton at Rev. Wright's former church as "mockful," "incendiary," "hateful," "controversial," "unpatriotic," "anti-white" and "racist" - the fact that Father Pfleger is white, notwithstanding.

Senator Obama came out fiercely opposed to Father Pfleger (and millions of black people): "As I have traveled this country, I've been impressed not by what divides us, but by all that that unites us. That is why I am deeply disappointed in Father Pfleger's divisive, backward-looking rhetoric, which doesn't reflect the country I see or the desire of people across America to come together in common cause."

Obama's remark prompts me to ask: What locations have you visited in your "voyage" across the country? What indeed is that mysterious element that unites all Americans? And, please be specific as to who you consider Americans?

As the esteemed poet, Amiri Baraka, remarked in a speech earlier this year, "We cannot merely stand on the sideline and be chumped-off."

Obama's remark prompts me to ask: What indeed is that mysterious element that unites all Americans?"

Looking back at the warning given to us by Malcolm X on April 12, 1964, it's sad to report that most of us never bothered to hearken our black prince's call. He warned us of our "chump-like" sensibility, and unfortunately, we remain as sheep-like as ever. It is undeniable that our warrior was speaking of 2008 when he said, "Anytime you throw your weight behind a political party that controls two-thirds of the government, and that Party can't keep the promise that it made to you during election time, and you're dumb enough to walk around continuing to identify yourself with that Party, you're not only a chump, but you're a traitor to your race!"

* Tolu Olorunda is an 18-year-old Nigerian immigrant and recent High School graduate living in Indiana. He is also a local activist and writer who can be contacted at