The death of Marie Vesco, aged 19, en route to the Carnival Against the Arms Trade outside the Arms Factory EDO-MBM, has been a blow to everyone involved in the campaign. Marie and her friends were cycling from London to Brighton to participate when her bicycle was hit by a car. Marie was a committed anti-war activist with the Whitechapel Food Not Bombs and the Brixton Reclaim Your Food groups. Her commitment against climate change and war was what motivated her and her 11 companions to cycle from London to Brighton for the protest.

A close friend of Marie’s said, “She was a very warm and generous person who was always laughing and always made people laugh. She had just moved in with her boyfriend and had plans to open a social centre. She was very giving and always lent a helping hand. Things will never be the same without her.”

The fact that she was killed on the roads, whilst cycling lawfully and safely, speaks volumes about the priorities of the British government. Whilst arms dealers are subsidised to the tune of billions of pounds, the relatively small amount of money that it would take to provide safe cycle lanes for bikes is held back.

Andrew Beckett, Smash Edo press spokesman said “EDO’s weapons are used in wars that are fought for oil to fuel the automobile industry that is burning up the planet and responsible for countless deaths. The Smash Edo campaign is ready to give any support they can to Marie’s friends and fellow campaigners.

There was a minute’s silence on the Level where protesters gathered after the demonstration in her honour.

EDO MBM Technologies Ltd are the sole UK subsidiary of huge U.S weapons manufacturer EDO Corp.From their base in Moulescoombe Brighton, EDO MBM manufacture vital parts for the Hellfire and Paveway weapons systems,laserguided missilesused extensively in Iraq, Lebanon, Palestine and Somalia. EDO Corp were recently acquired by ITT in a multi-billion pound deal. ITT's links to fascism go back to the 1930s. The founder Sosthenes Behn was the first foreign businessman received by Hitler after his seizure of power.

There has been active campaign against the presence o f EDO MBM in Brighton since the outbreak of the Iraq war.Campaigners include students, Quakers ,Palestine solidarity activists, anti-capitalists and academics. Despite an injunction under the protection of harassment act (which failed) and over forty arrests the campaign is still going strong.Their avowed aim is to expose EDO MBM and their complicity in war crimes and to remove them from Brighton. They hold regular weekly demos outside the Moulescoombe factory on Wednesday's between 4 and 6. 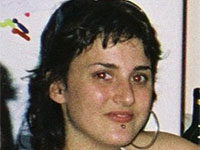 When I read this my heart fell. While I never knew her surname and couldn't be sure from the press release I quickly confirmed my fears finding a photo of her in the Argus newspaper. Maire was a regular at rampART and put loads of time into the short lived ram part 2, specifically the cafe there. More recently she had been really busy with things in Brixton including the Food Not Bombs there.

"Marie Vesco came to London from France last year to study at the London Metropolitan University. Before taking up her studies she worked for a few months as an au pair. She felt very strongly about injustice in the world. There is enough food to feed everyone and yet people go hungry. Along with a group of friends; she would collect edible food that was being thrown away by markets and retailers and prepare vegan meals and give them away to passers by. Marie loved cats and cycling and she had a great strength to not only stand up for herself but also to consider other peoples viewpoints and to concede when appropriate. Marie was wise for her age and had the ability to show deep empathy. She was looking forward to going to France next week to celebrate her 20th birthday with friends and family. Marie will be missed by her family and her many friends in England and France."
(Posted by: Gerry, London on 11:55am today -

special reclaim your food in brixton being planned

Her friends are planning a special reclaim your food in Brixton Oval, currently deciding whether to do it tomorrow Sunday 8th of June or the next one. It will be around 4pm , please watch this space

The 400 cyclists stood for a minute silence today in memory of Marie before the start of the Naked Bike Ride in Brighton. As illustrated by this tragic incident, we are all naked before the car.

Actions and some words from Russia

8.06.2008 Actions in memory of Marie Vesco were held in Moscow and Bryansk.

Agree with me, it is not the best time
My friend taken for his requiem...Venya Drkin

... 6th June 2008
Frenchwoman Marie Vesco (lived in London), activist of the Critical Mass
and Food Not Bombs died in her way to the Carnival Against the Arms Trade.
It was pacifist mass-meeting, but there were many people from the Critical Mass.
She was carrying food for activists distribution. Two cars drived directly into
a cyclist group. Marie died instantly and her friends could do nothing to save her.
Marie was just a few days away from her 20th birthday.

Bryansk
In action participated 7 people. Were cooking buckwheat porridge with vegetables and
soy meat. Fed about 15 comers. All who wished second portion, got it. During the
distribution were spreaded about 100 leaflets devoted to Marie. Write us

Photo from action in Bryansk:

Moscow
Today moscow fnb went to city centre to large indian festival where wrote "Мари Веско" with
a piece of chalk on asphalt and were distributing leaflets. Many people, mainly older ones,
after receiving leaflet were praying. People of so many nationalities and religion.
Some of them were asking abbout the Food Not Bombs and Critical Mass.
Totally 150 leaflets were distributed.

Photo from action in Moscow:

Also at this time was held FNB on traditional give-away place.
10 activists fed 70 homeless people with buckwheat with vegetables, bread and tea.
Leaflets were spreaded too.

Nizhniy Novgorod
Today 7 activists leaded another Food Not Bombs action on the Moscow railway station.
Feeding was fast, because came more people then always, about 25 persons. Cooked buckwheat
with vegetables, bread and hot tea, which took a very place at such a cold day.

Photo from action in Nizhniy Novgorod:

It is known, that actions were held in many cities of Russia, leaflets weren't spread on
them, had no time to print.

St.Petersburg
1)Food Not Bombs. Cooked buckwheat with mushrooms and tea. Fed about 25 people.
It is surprising, that action didn't attract militias attention. 8 activists.
2)vegetarian picnic in the context of passing in Peterburg festival "Votes for the animals"
that attracted about 30 persons. Sandwiches and fake wurst, vegan pies, tomatos,
lettus and cucumbers.
Write to us: icq: 197-853-229, 356-664-307

In Saratov
fed about 25 people.
Photo:

Also FNB was held in Apatiti

Initiative The Critical Mass - It's a movement ... of bicycles, in the streets
Their webpage:

Iniative Food Not Bombs (FNB) - it's a protest against militarism and misery,
expressed in free feeding of hungry people with vegan food.
Webpage:

It Is Well With My Soul

'When peace, like a river, attendeth my way,
When sorrows like sea billows roll;
Whatever my lot, Thou has taught me to say,
It is well, it is well, with my soul.'
Ho­ra­tio G. Spaf­ford

Though I did not know her personally, I knew her face and name

My thoughts and love go to her family and friends

The next time some one hassles you for cycling on the pavement... you know what to do

as cyclists we are all vulnerable before the car.

Devoted to making the world better

While we are led to believe by the general media that anyone under 20 is either a binge-drinker or a knife-carrying hoodie, I have met so many amazing young people through the campaign against Heathrow expansion. I didn't know Marie personally but reading about her, and the work that she did in her short life, has moved me to tears. What a terrible loss - my heartfelt condolences to her family and friends. (The cycling issue, with the lack of consideration and funding being given to cycling, is an important one. We should try to bring Marie's tragic death to the attention of people who could make some changes. It's about time.)

Manchester critical mass will be having one minute silence in her honour. We are very sad to hear that a fellow cyclist and someone that has been described as such a beautiful person has been killed and send our best wishes and love to her friends and family