Has the farcical police investigation into the alleged theft of four unwanted green plastic garden chairs from a skip destined for landfill been abandoned yet? Of course not! A file on the case is currently with the Crown Prosecution Service for their consideration. 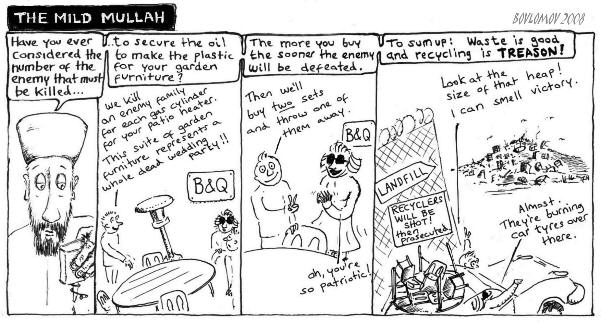 The story so far:

When answering bail at Wrexham police station on May 28, Genny Bove, the suspect in the case, was told that her signed statement to the police confirming that she removed the chairs from the skip at Lodge household 'recycling' centre on 2 May was not on her file (it had been delivered to the police by recorded delivery six days earlier) and that a video identity parade would go ahead. Officers were eventually persuaded that this would not be necessary - especially since several mainstream media websites were carrying radio and video interviews with Genny talking about the incident.

They still wanted the statement but not the typed and signed copy they were offered to replace their lost one. It was proposed that the sergeant from Coedpoeth police station some miles away would attend Wrexham police station at a later date to take the statement down on a proper police form or record it on a police cassette tape. For some reason, Wrexham officers were not able or willing to perform this task and Genny was re-bailed to 6 June. So much for trying to save a bit of public money! The statement had been sent with the intention of avoiding further waste of police time and resources on an identity parade. Genny protested that bringing in a sergeant from an outlying police station was also going to cost a bit, but the custody officer was adamant that this was the only way to proceed.

Yesterday, however, a police officer called at Genny's house to inform her that she would not now need to attend the police station today, as the police have decided they have enough evidence in the form of media reports and interviews. The file on the case is with the Crown Prosecution Service (CPS) and Genny has been re-bailed to 2 July, by which time the CPS will hopefully have decided whether or not to bring charges.

The police officer was at pains to explain that he was only doing what he was required to do and that he didn't necessarily agree with the investigation of this case. He said that the police were under a duty to investigate any allegation of theft made to them. This is not strictly true, as the police have the discretion to prioritise their work and to decide that using their time and resources on particular cases is not in the public interest. At Coedpoeth police station, Genny was informed by Sergeant Samuels that the police had three options, one of which was to do nothing, but they had decided that it was 'not in the public interest to do nothing.' Last week, a damning report by right-wing 'think tank' Civitas - perhaps better-known (or notorious) for its opposition to immigration, asylum and political correctness - condemned the government targets which have led police forces across the country to adopt unethical and unpopular policing policies.

The executive summary of the report notes:

"[B]ad targets are coercing otherwise ethical public servants into unethical behaviour. Serious crime is ignored and minor crime elevated to the serious in order to satisfy the measurement regime. One officer said: 'We are bringing more and more people to justice - but they are the wrong people.' Targets and increased central control are turning what should be an independent police force into what another officer described as, 'an extension of the government'."

Right-wing governments, both Tory and Labour, are naturally always keen to have the police working to their political priorities, but perhaps it suits the opposition agenda to take an ostensibly libertarian line just now.

It would appear that under a system used by North Wales Police to help the force reach its government targets, the same number of points are awarded for arresting an alleged skip thief as apprehending a suspected murderer - which makes the police investigation seem somewhat less wasteful of resources, unless you want any murders solved, of course. A freedom of information request has been submitted to North Wales Police to clarify the situation.

"I can't imagine why it will take four weeks for the Crown Prosecution Service to decide whether to charge me. It does seem possible that there are political factors involved, especially given the recent Civitas report. I hope that common sense will prevail, as a crown court trial over a set of unwanted garden chairs would be both costly on the public purse and farcical.

"Meanwhile, I call on the council to address the serious matter of providing proper re-use facilities in Wrexham to keep good things out of landfill and recycling skips. I, along with other environmental activists in Wrexham, would be happy to meet with the council to discuss ways of getting the ball rolling on this important issue. I urge council officers and councillors to contact me to discuss this further."

The chairs have been removed to a place of safety for the time being.