Slanderous news media has appeared in a government linked newspaper and a campaign of rumors has been initiated, obviously designed to undermine and isolate the Africanist Movement and its director, Chernoh Alpha M. Bah. Sierra Leone’s neocolonial government is apparently moving to criminalize the Africanist Movement in order to justify jailing and/or otherwise destroying these courageous leaders of our struggle for African self-determination. 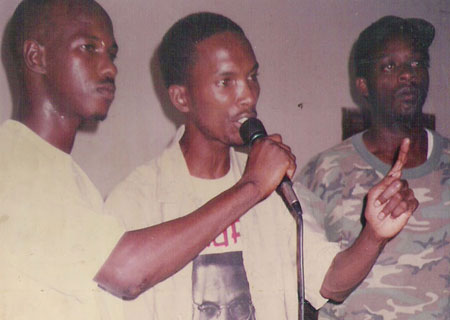 Africanist Movement Under Attack in Sierra Leone!
(Hear LIVE reports and discussion on www.UhuruRadio.com Sunday at 11:00 and 16:00 U.S. Eastern Time)

African People’s Socialist Party (APSP) Chairman Omali Yeshitela stated on Thursday, “I am convinced that the Africanist Movement is under attack now because the neocolonialist government of Sierra Leone sees it as a threat to its designs to deepen the emiseration of our people there, by selling even more of the people's resources to an assortment of imperialist forces.

“Not only has the Africanist Movement initiated a number of programs designed to provide immediate relief to the people of Sierra Leone in the areas of healthcare, water harvesting, subsistence and commercial fishing and agricultural development, but politically, the Africanist Movement has elevated the struggles of the workers and impoverished toilers in Sierra Leone as well.

“This has happened with the movement's introduction into the political arena a Revolutionary National Democratic Program that calls for power to the workers and peasants, nationalization of the strategic components of the economy and basic democratic rights to workers and others, among other things. (see UhuruNews.com for full program) The Africanist Movement has also elevated the struggles of the workers and impoverished masses to the international stage. This has occurred with the Africanist Movement becoming part of the African Socialist International (ASI) and Chernoh Alpha M. Bah, himself, becoming the Director of Organization of the ASI, thus ending the isolation of our people's just struggle in Sierra Leone and much of West Africa.”

Chernoh Alpha M. Bah, stated on Wednesday, “We are dealing with a paralyzed regime that sees every mobilization of the masses as a threat to its existence. It is true that the current global economic crisis is hitting hard on the neocolonial regimes of the ‘developing nations’ and its resultant effects are mass disenchantment and uprising. I just heard this morning that the government in Liberia is forcing people from Monrovia to go back to their villages to farm. There is an ongoing army mutiny in Guinea-Conakry with soldiers calling for payment of arrears and increase in their rice subsidies. It is tremendous crisis for the African middle class and political elites. All efforts they have will now be directed against anyone attempting to raise the ante against such a decadent system.”

Upon returning from a visit to Sierra Leone in November 2005, African Socialist International leader Luwezi Kinshasa reported, “Police presence is overwhelming. No matter where you go, the police are never far. This expansion of the State is an indication of imperialism’s effort to maintain the status quo in Sierra Leone. A policy for massive police recruitment is in place.” (for complete story, visit the website of the African Socialist International)

Tune in Sunday to www.UhuruRadio.com at 11:00 and 16:00 U.S. Eastern Time to hear a live discussion with Chernoh Alpha M. Bah direct from Sierra Leone on the urgent current situation and what you can do to defend and support the legitimate struggle of African people to control the vast riches of Africa for the benefit of the working class and poor peasants.