In the run-up to today's detention review hearing there was further provocation. The case files substantiating the further detention were not delivered to the defence until the late afternoon of the day before the hearing. The accused were therefore unable to submit statements any more in reply to the new case file contents. The judge went on sick leave shortly before the hearing was to commence. Each person was allocated ten minutes for their hearing, in which short time the substitute judge was to decide the further fates of the detainees.

Harald Balluch, president of the Association against Animal Factories (VGT), said, “I am thoroughly horror-stricken that people can be locked up arbitrarily for weeks in Austria without a specific accusation or proven risk of collusion or flight. These are individuals who have never once in their lives held a weapon in their hands – to brand them as terrorists and state enemy number one is a scandal without compare. Animal protection has been successful and business interests find that inconvenient. This disastrous paragraph 278a gives the authorities a real field day – it lets them just dispose of people who make use of their freedom of opinion and their freedom to demonstrate.”

Many animal protectionists gathered in front of the District Court of Wiener Neustadt, where the review of the remand in custody took place today. Drumming and chanting loudly, they repeated their one demand: “Free the animal protectionists!” The youth section of the Lower Austrian Green Party and their Chairperson Dr. Madeleine Petrovic also took part in the demonstration, showing that they share our concern for the prisoners.

Hunger Strikes at the new "Guantanamo Bay" in Vienna

smash fur - save the prisoners 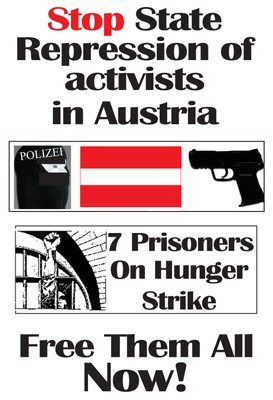 Dr Martin Balluch on day 16 or so of hunger strike

"...I ask everyone who cares about animal protection and human rights to take action now to prevent this crime. This kind of police arbitrariness against NPOs is something we might recognize in dictatorships, but not in a democracy. Please stand up strong; stand against this outrageous injustice. My life depends on it."