For various reasons, the main one being lazyness I have neglected to write my own report of what went on. Instead I have pasted below the write up that appeared in the alarmingly brighton-centric Schnews. It pretty much covers all the bases. Enjoy... 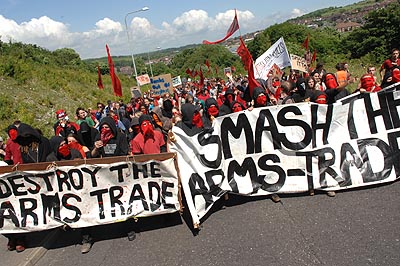 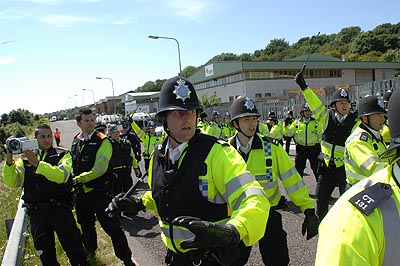 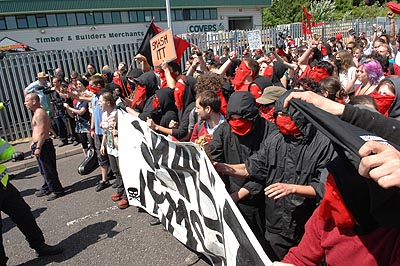 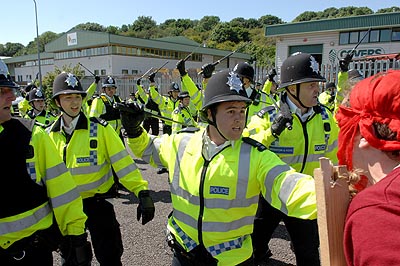 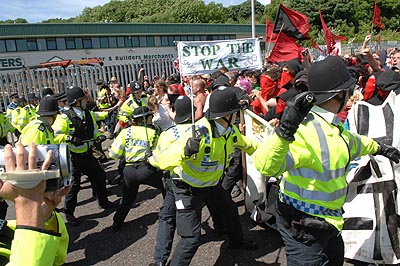 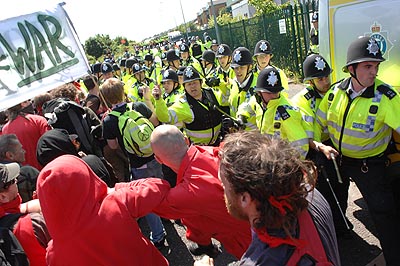 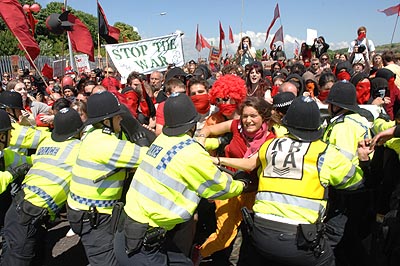 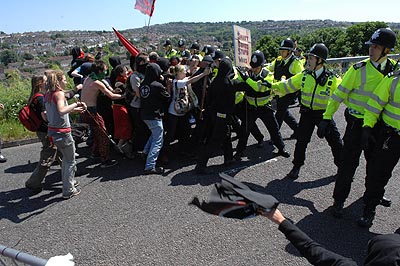 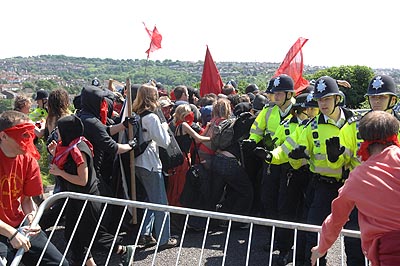 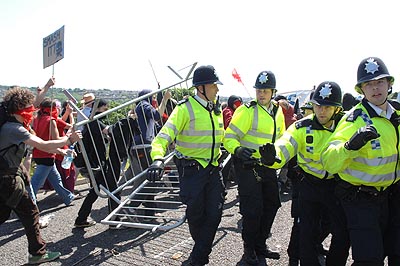 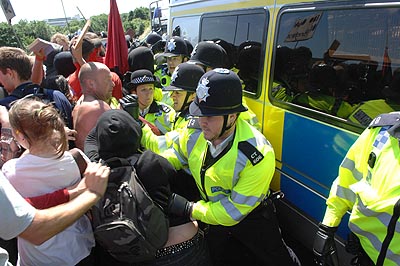 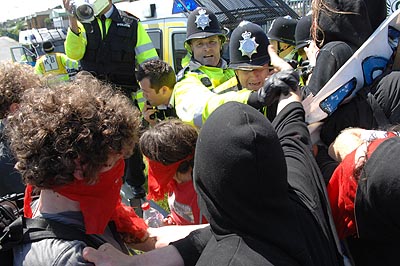 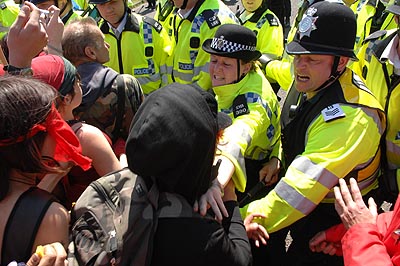 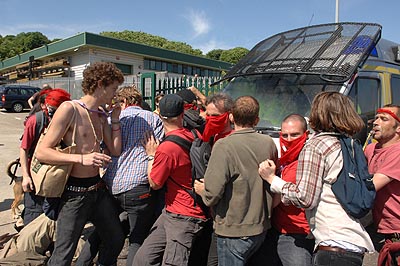 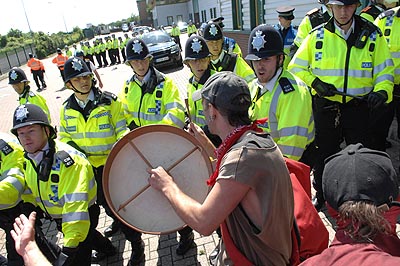 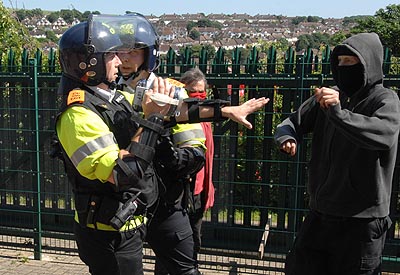 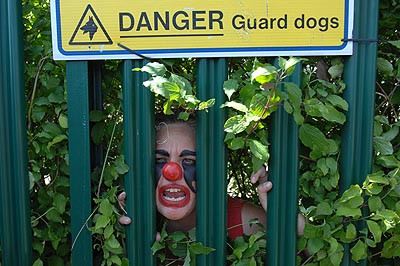 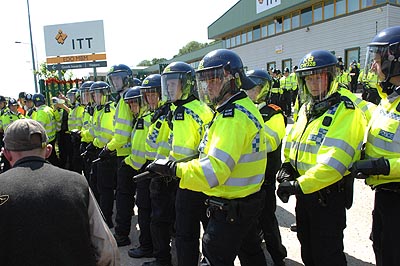 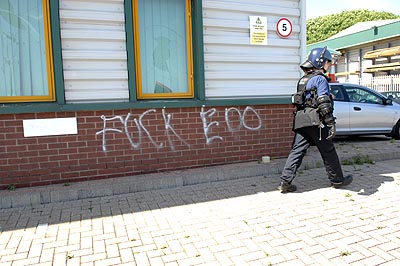 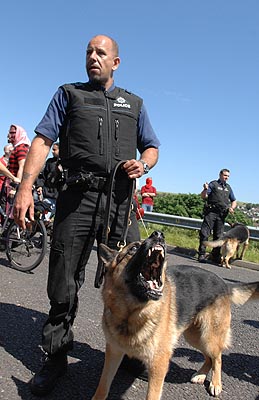 Nostrils still flaring from the stench of spray paint and pepper spray ....yer SchNEWS crew reports from the frontline of the anti-arms trade struggle, Brighton styleee. Yep its the event we’ve been relentlessly pushing for the last two months – the Carnival against the Arms Trade.

With red flags flying, three soundsystems, a cardboard tank and the inevitable samba band around 500 people were met by a surprisingly small number of police on the Level in Brighton. At around 1pm having confirmed the factory was open the march moved off towards EDO MBM, around a mile and a half away, chanting “Smash, Smash EDO.”

As soon as the crowd turned up the road leading to the weapons factory they were confronted with a pen constructed from crash barriers and a section 14 crowd control order. Police obviously planned to contain the demo well away from the site, but the masked up-for-it crowd of activists had other ideas. The cage was swiftly taken to bits and used to push against police lines. One soundsystem ended being used as a battering ram. One red bandanna sporting protester told SchNEWS “We came here to fight the arms trade – we’re not gonna be pushed into a playpen.”

As the police resorted to wild baton strikes to hold the crowd back they were outflanked and pushed down the road. The carnival then staged a noisy demo fully occupying the road outside the factory. Although it looked as if most of the workers had been sent home early – a few of the suits had hung around on the top floor perhaps to watch the action. Well they must have loved the bird’s eye view they got next...

Someone tugged at one of EDO’s massive steel gates which suddenly and miraculously opened. Half a dozen gobsmacked protesters waved the main crowd over. Flag wielding activists piled onto the factory’s forecourt and a few plucky individuals literally smashed EDO, putting in their windows. Anti-war slogans were sprayed on the building and MD Paul Hill’s SUV copped a few bricks. Police eventually forced people out with batons, pepper spray and dogs.

Eventually having made their point forcibly the crowd moved back into town before police re-reinforcements arrived. Ten arrests were made in total during the fighting, although many more were de-arrested in displays of crowd solidarity. Police violence hospitalised a number of others.

On the way back into town the scuffling continued with one motorbike cop getting his Chips as he was covered head to toe in white paint. In a pathetic display of childish temper tantrum one gang of riot police smashed the cardboard tank to pieces.

A Smash EDO spokesman said: “Overall the day was a victory for the campaign – in the face of police brutality we were able to show the massive disgust that exists at those who profit from death and misery. They might accuse us of being violent but anything that happened today pales in comparison to the damage inflicted by EDOs products in Iraq, Palestine, Afghanistan and Somalia. Congratulations to all who took part for their action and initiative and strength in refusing to be intimidated by the police aggression.”