Action day for persecuted eco-activists in the US

This Saturday, there will be an international action day for the, by now numerous, eco-activists who are currently imprisoned in the US. 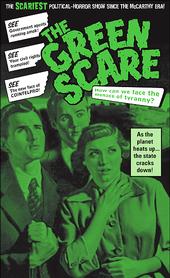 The repression against people carrying out direct actions in the United States continues to rise. The most recent conviction in a series of sentences is that of Eric McDavid, who was sentenced to more than 19 years in prison (

http://supporteric.org/). He has actually never carried out any actions, but was allegedly part of a group that (according to a police informant) was planning them. He was sentenced on grounds of a witness statement of this police informant, who had not only infiltrated but actually steered the group, and received at least 75.000 USD for her "work". Eric is 19 years old. Because he refused to "confess" or cooperate in the investigation, he received this incredibly high sentence.

Eric's conviction is only one of many examples. Many more people are persecuted and prosecuted and consequently threatened with life in prison. The prosecutions started when North American authorities started an offensive against the radical ecological movement; the resulting investigation and prosecutions were later referred to by activists as "green scare" (see also

http://en.wikipedia.org/wiki/Green_Scare). A court case is currently held against Marie Mason, for example (

http://freemarie.org/). Briana Waters has already been found guilty and is awaiting her sentencing in prison (

http://trearrow.org/) is also facing trial after he was extradited from Canada. Although Tre Arrow "confessed", in the hope for a lower sentence, he has refused to provide the authorities with information about others.

Many are already sentenced and imprisoned, many others could face new investigations and procedures at any point in time. The threat for radical activists is enormous, especially when considering that home security legislation has turned the US into a police state (see www.greenscare.org for background information).

http://en.wikipedia.org/wiki/Earth_Liberation_Front. No one ever got hurt in any of the actions, which were generally related to fighting climate change and the introduction of genetic technology.

The 14th of July has been declared international day of action by the campaign supporting the first eco-activist to be imprisoned, Jeffrey 'Free' Luers. His campaign also shows that international solidarity actually works. He was initially sentenced to a horrendous 22 year imprisonment (his "crime": setting fire to three SUVs owned by a car dealer). In appeal, the sentence was reduced to ten years. Jeffrey, who has been in prison since 2001, is expected to be released at the end of 2009! (see

One of the biggest problems in resisting this extraordinary level of repression by the state is the American justice system, which rewards people who make statements incriminating themselves and others. Some of those accused also did this, and part of this "evidence" has been proven to be incorrect, and yet was rewarded with concessions in sentencing. Some of these snitches are therefore either not sentenced, or free after a shorter prison term, even though they were accused of the same "crimes" as those who are spending decades in prison. These people are of course not supported by solidarity campaigns.

Others have decided to confess and cooperate in the procedure against them, yet have refused all other form of judicial cooperation. And then there's the brave ones, who have denied all charges and all forms of cooperation. These people are of course faced with the harshest forms of repression, and are in most need of support.

Those accused, their friends and their family welcome international solidarity very much. Publicity about their plight is also very important. It should be considered, however, that those accused, especially when they are in the middle of a trial, are sometimes not waiting to be linked to wild actions which are used by the prosecution to criminalise them even further. Financial support is also welcome, for the individual trials as well as for the general campaigns. A small campaign office that manages a high work load with little means is the CLDC (

http://suportdaniel.org), one of the many victims who was sentenced (to seven years), declares in one of his newsletters why the work of the CDLC is so important (

Furthermore, it is important to send letters, postcards and books to the prisoners. The North American prison conditions are, however, very strict (and here also, prisoners might not want to be linked to illegal political actions). Also, do not forget to protect your own privacy (

And 14 &15 June is time for solidarity actions!