On May 30th 2008 Sean was found guilty of "conspiracy to interfere with contractual relationships so as to harm an animal research organisation" and was sentenced to four and a half years for his role in running the SSAT (Stop Sequani Animal Testing) website.

Since his imprisonment there have been solidarity actions from Yorkshire, the south west and as far away as Mexico. 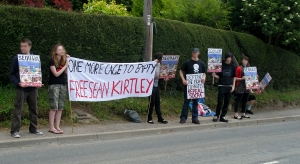 “Solidarity is a weapon!

In the early hours of the morning ‘Free Sean Kirtley’ was painted off a bridge in the southwest. This was our first action to highlight the unjust imprisonment of peaceful campaigners under SOCPA. It will not be the last.

Till all are free..

“Activists liberated 27 chickens from a factory farm in the UK on the 5th of June. These chickens were less than a fortnight away from being taken to the abattoir. Although all of the chickens were in a terrible state after the weeks of terrible conditions in their overcrowded hell-hole they took to their first few days of freedom well scratching around in the dirt and feeling the warm June air.

This action was carried out by 6 individuals in response to the unjust imprisonment of UK activist Sean Kirtley by a kangaroo court. This was their first liberation, it won’t be their last.”

"'Free Sean Kirtley' was painted in 6 foot high letters off a bridge in Yorkshire.

This action was done to highlight the injustice in the UK 'justice' system and the imprisonment of peaceful campaigners.

"Following the recent sentencing and imprisonment of fighters for animal liberation (Eric McDavid, Rod Coronado and the unjust arrest of Sean Kirtley), activists united in the Frente de Liberación Animal (FLA) of Mexico could not remain unarmed and without demonstrating our total rejection of the system of 'security' of the major world powers (in this case England and the United States) who are accomplices in murderous speciesism, both executioners and true genocidal murderers of our mother earth and our animal brothers and sisters.

That is why the FLA has carried out a direct action against the dirty fur business in Mexico State. In the evening of May 19, red paint was spilled on the doors of such a business, its walls, curtains and windows were redecorated as well with paint-filled bulbs, thus demonstrating our small and sincere yet at the same time strong support to our fellow prisoners, to those who not only have dreamed of animal liberation but have carried it out, to those who risked their lives to liberate and to avenge the lives of others, to those who left fear behind and decided to take to the street and not to join those vegans who only avoid consuming animal products and do not see the real struggle moving forward from there.

As a cell of the FLA we are enraged to know that the capitalist system burdens us by creating aberrant behaviors and sicknesses (like speciesism, machismo and racism) which surround all those who want it to change, it hurts us but we push forward in the struggle for animal liberation when we hear that another compañero is in the dungeons of the bourgeoisie, from Mexico we send a warm embrace of solidarity and our most sincere support for these three who are condemned. Forward! Not one step back!

They may be able to censor our words and our deeds, but never our ideas!

The day will come when the cages will be opened and finally they will see a new freedom.

Give up on this struggle-- NEVER!"