Blood on the streets as Bush enters via Brown's back passage.

As demonstrators clashed on the barricades to Whitehall today, George W Bush snuck into Downing Street via the St James Park entrance. Riot police blocked the road from Parliament Square to the park, but few realised what had happened anyway. 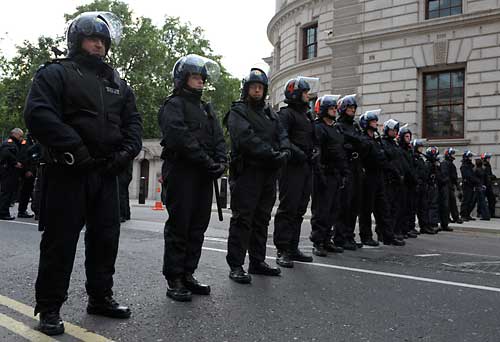 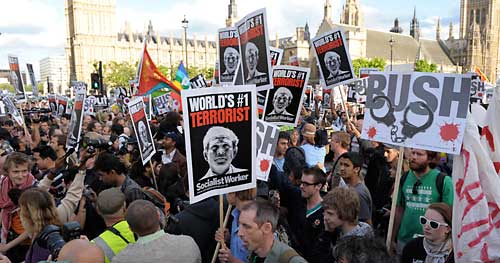 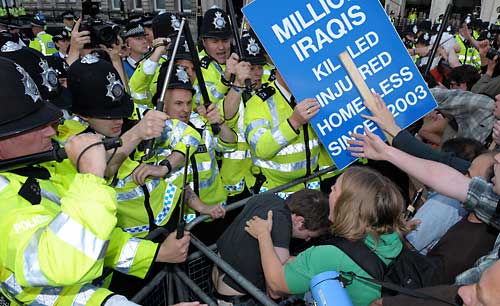 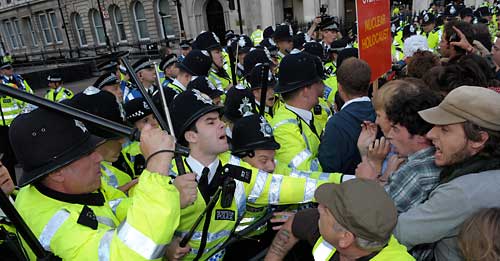 Out come the batons 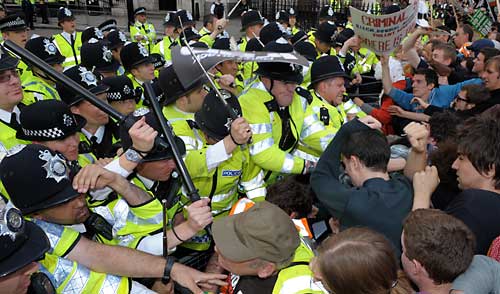 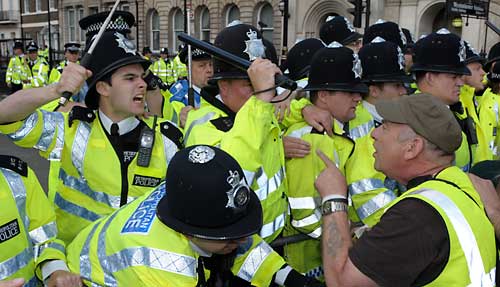 Police respond with some aggression... 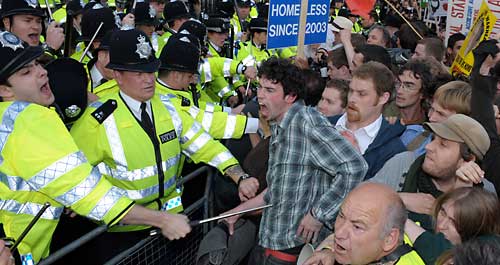 ..which just gets worse.

5pm and the usual tedium we'd associate with a StW event began. Less than a thousand filled the square, all but a few flogging Socialist Worker or carrying the party's begging buckets.

As the predictable speeches poured out of the pa one 'Socialist Party' stand even had a stab at flogging silkscreens of Che Guevara at a fiver a pop. Knocked out no doubt in some south asian sweatshop for pennies this surely wins a coconut for global capitalism.

No matter. At 6.45 celebs led a pre-arranged token march the fifty yards to the Whitehall barricade. Constables smirked, Stop the War having briefed them of their limited intent.

Others turned out to have different ideas. As placards and sticks flew, a determined mass pushed at the centre. Police jumped to secure the barriers but to no avail. Soon they were in the air flying over the police line's heads.

Cops responded with vicious baton blows. Fingers and heads bled, stabs were made to the stomachs, people fell to the floor but the crowd pushed on. A senior officer ran the line shouting "No Arrests, No Arrests, orders from the top".

Stop the War stewards now pushed to the front to try and calm matters. Ill briefed cops, not realising they were on the same side walloped them with sticks.

As dusk fell the TSG riot cops took the front line. The crowd responded with a sit down, punctuated with the odd punch up and, relative calm having being restored, the introduction of the usual snatch squads.

The only thing we can positively relish it that it's the farewell tour and if we're lucky enough he'll stay alive 'till the end and we won't get 'Old Dick' Cheney in charge.

Bush did come down Whitehall

Checker was correct. Along with 5 others I left the main demo and walked round the back streets to the Trafalgar Square end of Whitehall. It was lined with Bush-supporters - tourists and ex-pats. There was a flurry of activity just after 7 and then a motorcade came through at speed - Laura Bush could be seen wearing her weird Stepford-wife grin and waving like the Queen. Despite attempts by the police to stop us, we raised our placards and blew our whistles. Shame that more protesters didn't do it.

as can be clearly seen on the film, it was the samba band that drew people towards the barriers with their sound, not any 'defiance' by the stwc. in fact after a while, the stwc stewards moved to the very front of the crowd and their members were asking people to move away.

it is a shame (or more design by organisers?) that ALL approaches to downing street weren't sites for demonstration. the fences and road blocks from the mall and round down whitehall were all carefully prepared for bush's triumphal entrance, while the stwc had arranged the protesters were busy down at the other end of whitehall. was this the 'negotiation' that went on? we've certainly seen it before.

i don't really want to further the never-ending debate about such allegations and observations, so i think it's just another lesson that people shouldn't rely on stwc protests and should self-organise genuine and workable alternatives on these occasions. it is indeed a shame there weren't more than a handful of people with banners as the cars went past. 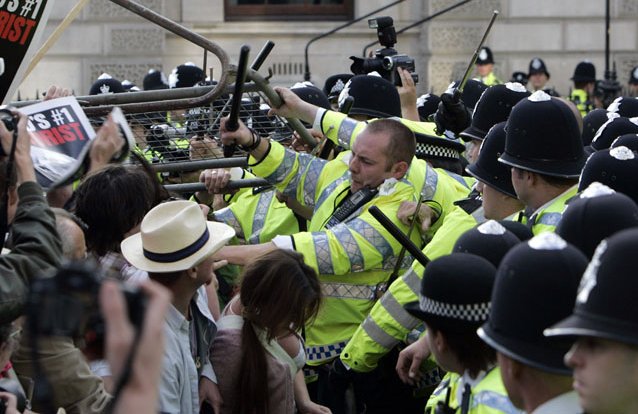 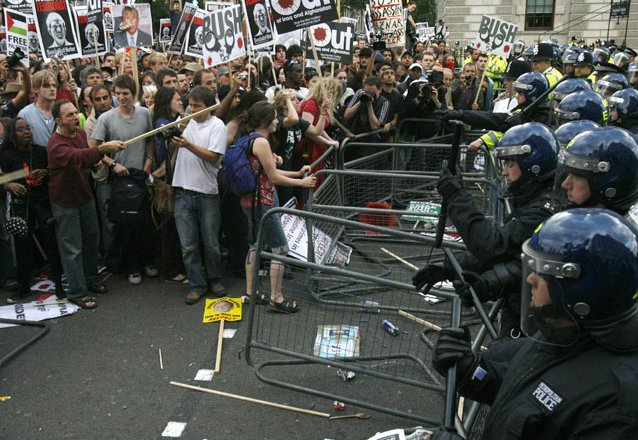 Following the visit of United States President George Bush to London, the senior officer in charge of the operation has praised the efforts of the officers involved in dealing with attempts to breach security cordons which saw missiles thrown at police resulting in a number of officers being injured.

"We are seriously disappointed by the irresponsible and criminal action of those who have challenged police, physically ripping apart security barriers with the sole aim of breaching security in Whitehall.

"The acts that we witnessed yesterday were deplorable and cannot be described as lawful demonstration.

"This visit demanded the very highest of security. It was a team effort from across the Met. Officers diligence undoubtedly significantly contributed to making the President of the United States' farewell visit to London pass off smoothly.

"I would particularly like to commend the efforts of those officers who maintained the cordons in Parliament Square during the Stop the War Coalition demonstration.

"What started as a peaceful protest turned as hundreds of demonstrators made concerted efforts to breach police lines and security measures. I could not have asked for a better response as those officers held their line in the face of sustained and unprovoked attack. Facing missiles and extreme provocation your response was measured and professional.

"Thanks to everyone involved in this operation for a job well done."

25 people were arrested for a variety of offences including assaulting police and at least ten officers suffered minor injuries during disorder.

Seven others have been bailed pending further investigation and three were given words of advice. One 20-year-old man, arrested on suspicion of a public order offence was released with no further action. 11 people remain in custody.
Bulletin 0000000890 16 June 2008