A 5 metre high Giant Inflatable Elephant shocked delegates at the Edinburgh Caledonian Hilton today with a massive banner stating ’Aviation is the Elephant in the Room.’

This spectacle, created by anti-aviation group Plane Stupid Scotland, is a huge visual reminder that aviation remains a massive elephant in the room as long as emissions from aviation continue to be ignored in the Climate Change Bill. 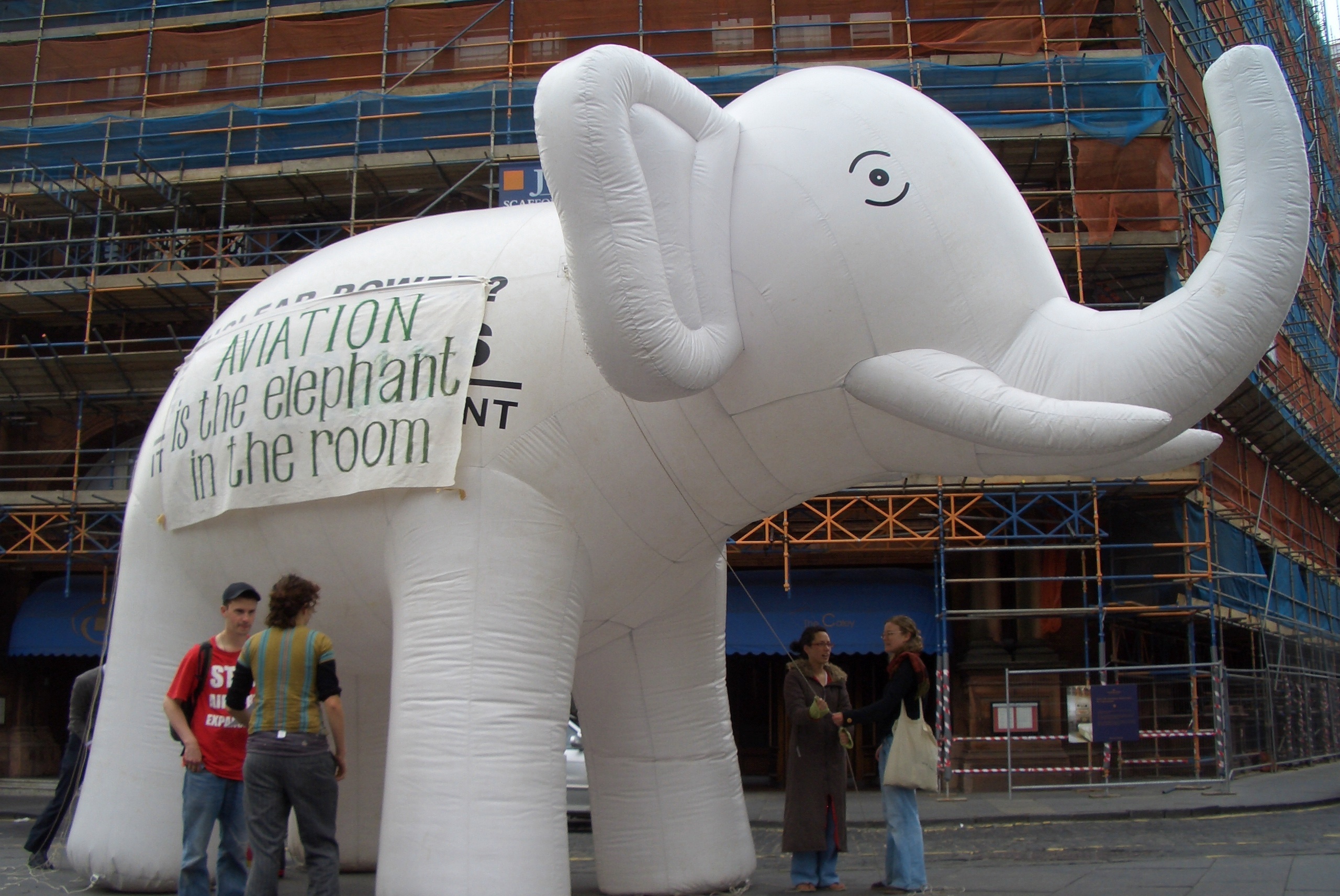 The aviation elephant in the room

The display took place outside a Hilton hosted conference that brings organisations and researchers together to discuss how to ‘deliver the national transport strategy whilst meeting… climate change targets’.

The message for delegates and the public was clear: we must not repeat the government’s mistake in ignoring aviation, and make it top priority when discussing transport and climate change.

Plane Stupid Scotland member Dan Glass points out that
‘The elephant in the room here is that if Scottish aviation grows as predicted its pollutions will swamp all our efforts and sacrifices to reduce emissions. We can forget about 80% by 2050 – we can forget about a liveable world for our children.’

Calls to include aviation in the Scottish Climate Bill are rendered doubly urgent as the Scottish Government will imminently bring legislation to expand both Edinburgh and Glasgow airports, and to outlaw objections to these expansions whether by parliament or public unless on limited planning grounds.

There is a rising tide of dissent against aviation expansion in Scotland, leading recently to the creation of anti-aviation network AirportWatch Scotland. Plane Stupid Scotland too shut down Edinburgh’s private airport in January and occupied the Holyrood rooftops in April. These are part of a growing host of groups and individuals that see airport expansion as a blight upon the environment and upon affected communities (1).

"We are facing a runaway climate threat but the Scottish government's reaction is to triple air traffic and expand Glasgow and Edinburgh airports whilst conveniently excluding aviation from the Scottish Climate Bill. The climate scientists have made it clear - we have to stop airport expansion. No more white elephants- real action now."
ENDS

NOTES TO THE EDITOR

2) An urgent, targeted and public investment strategy
in the alternatives to short-haul aviation

3) No more runways- and a strategy to dismantle
existing ones.

4) Mobilisation of affected communities to determine
their own lives against aviation expansion and runaway
climate change.

5) Research and investment into genuinely sustainable
alternative employment opportunities for those
employed in the aviation industry.

http://www.thewaterfront.co.uk/conferences/conf_calendar_Scottish_Transport_Strategy.php
The Scottish Climate Bill is available at:

http://www.scotland.gov.uk/Topics/Environment/Climate-Change/16327/Climate-Change-Bill, need other half of this reference that relates to increased passenger numbers www.aef.org.uk; Aviation Environment Federation report on the devastating effects of aviation on climate change.
Under the 2006 Planning (etc.) ScotlandAct, Ministers gained the power to designate 'National Developments'. This designation reserves decisions on where, when and what to build for Ministers alone, with no arrangements for scrutiny or accountability. Once a 'national development' is designated any subsequent inquiry will not be allowed to consider the justification or need for the proposal." (Scottish Environment LINK) The proposed National Planning Framework is a spatial plan which sets out a strategy for planning in Scotland, and identifies the first set of National Developments.
(1)