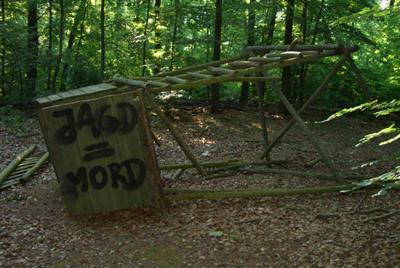 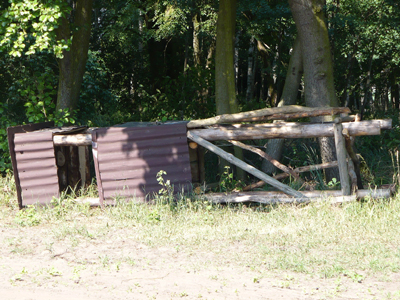 HUNTING TOWER OUT OF SERVICE (Germany)

The nursery is a storage center for animals who will be used for experimentation by students and academics from the university. Among the animals in cages are reptiles, birds and mostly mice. They live in overcrowded conditions completely removed from their natural habitat.
This speciesist practice, to see another as an object because they are of another species, is abhorrent to anyone who believes in the most basic concept of equality; believing that another does not suffer under conditions of imprisonment, torture and experimentation is an excuse, since they have a sensory apparatus similar to ours.
He who maintains silence is an accomplice in these acts of cruelty and to do nothing makes one equally guilty as those who carry out the cruelty; it was for this reason and many others that we took those caged from this prison, not to have them as pets but as equals, otherwise it would be a prison like any other.
We know that the physical destruction of this place is not the end of the experimentation, but if such actions increase it would be a real possibility.
It should be emphasized that those of us who undertook this action are individuals unrelated to any agency or organization, academics, officials or students of this university.
We oppose all forms of domination, as those reproduce power relationships. We assert that we act violently as a small response to the bloodthirsty violence of the State and the countless deaths that have lined the walls of this place, and as a response against the perpetuation of this form of education that is torture.
That this small flame ignites more than hatred in all those who believe as we do.

"Some time ago a hunting tower and seat in the Grunewald (Berlin) was destroyed and 'Hunting = Murder' spray-painted.
ALF"

"On the night of June 14 (International day in support of the earth liberation warrior Jeffrey Luers and all radical environmental prisoners), the Earth Liberation Front and Animal Liberation Front got together and went to the doors of one of the many companies guilty in the domination, destruction and extermination of the earth and its living beings.
Various slogans were painted such as 'No More Vivisection,' 'ALF,' 'No HLS,' 'Support Jeffrey,' 'Murderers' and others which attacked the company Unilever which shares property with DHL (an HLS supporter). Now as one passed through these modern-day extermination camps, one can read the slogans of the FLA and FLT on most of its walls.

Compañero Jeffrey we know about your situation and it gives us great pleasure to know that soon you'll be out here on the front line fighting again like you've done before.
We hope that those bars and life in prison leave you with even more strength to continue.
To all those radical environmentalist prisoners, an embrace from Mexico.

On the night of June 12 we visited the fish company Gävlefisk AB. Instead of celebrating graduation with our friends we decided to show what we think of those who make money by killing and torturing animals. This time the transport truck got its windows and mirrors smashed. This was the third action in a short time, the two other times the company got its locks glued and windows smashed.
ALF"

excerpt from anonymous report from

"In support of Jeffrey Luers and the struggle for animal liberation

During the early hours of June 14, the locks of every fur shop in the Bilbao city center were glued, in support of this prisoner and many others, and in general of the struggle for animal liberation."

"Activists in the North West decided to 'pimp' a hunt scums ride.

The car was easy to find as it had both the pro-hunt 'Felix Says' sticker and a BASC (Shooting) sticker in the rear window. The BASC sticker sealed the car's fate, the Judge in the Sean Kirtley case was into shooting and a member of BASC. The car had paint stripper applied, spray paint over the windows, windscreen wipers wrecked and one wing mirror smashed. Looked really pretty once we'd finsihed.

If the owner wants compensation then they should write to Judge Ross and NETCU. It's the criminalisation of legal protest that has caused this.

reported by activists in Spain:

On May 31 a new bullfighting arena opened in Puertollano (Ciudad Real). Two nights before many posters promoting the opening were painted with red paint.

HUNTING TOWER OUT OF SERVICE (Germany)

"On June 7 a hunting tower near Vetschau was made unusable.
ALF"

"June 13:
ALF visited the home of a breeder of birds in Cuatitlan State, Mexico and painted 'Liberation Now' on the property.
Forward comrades, sabotage and animal liberation!
ALF"