Saturday 5 July 2008, is the global day of action against the G8. A few days later, the G8 summit in Japan will start. In the Netherlands, you will also be able to help beat the system on that day, by participating in the collective game 'Enter Fortress Europe'. People abroad can also join in... 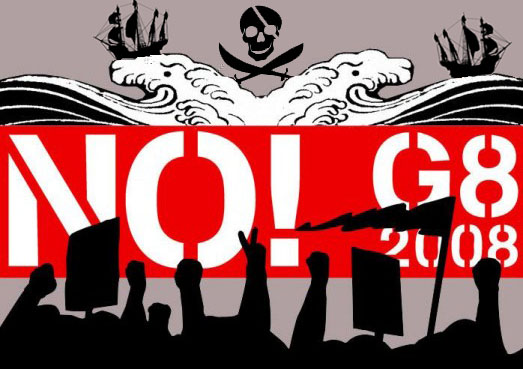 Saturday 5 July 2008, is the global day of action against the G8. A few days later, the G8 summit in Japan will start.

In the Netherlands, you will also be able to help beat the system on that day, by participating in the collective game 'Enter Fortress Europe'.

A short trailer about the action is published on

http://www.youtube.com/watch?v=z7gl3r7lEZk. For more information about the game, see

To participate in the game, you should form a team as soon as possible and start training!

So keep the day in question, 5 July, free. The precise location will be published shortly before the 5th. It is a location you can easily reach with public transport. And there will be a luxury touring bus available to take you there from Nijmegen and most probably from Amsterdam. More information on transport will be published on

Parallel on the central and collective game to beat the system, there is a decentral one as well. You can participate by choosing your own goal and mark it, on or around the 5th of July, with the 'Fuck the G8 Enter Fortress Europe' flag. As goal you should choose an object which, according to your team, is the most representative one for Fortress Europe and so the one which you want to conquer.

You have to take one (more is allowed) picture of your action and upload it to indymedia.nl. On indymedia.nl there will be a special place for the action day. The picture should preferably be posted together with a short explanation of the action. At the prize ceremony of the central collective game the jury of experts (more about them later) will decide which actions, central as well as decentral, will be given the prizes.

info@enterforteuropa.org or arrange an informal handover).

Also, it is possible to participate in the competition from the so-called foreign countries, i.e. if you're not living in the Netherlands. So: spread the news, participate, fight for a border-free world without the G8!

Last but not least, there will be, of course, great prizes to win. We will let you know about them shortly. For a regular information update check the website:

Why do we target Fortress Europe? Because it is 'our' most direct realisation of the policy of the G8 and the EU. The rest of the world is getting destroyed to keep cheapest labour, raw materials and energy for an economy of waste. The people who are the victims of this policy are kept out of Europe with military force and they are repressed when they rebel. Whilst those hit by repression try to resist, millions more survive every day in the system made for profit and not for people. Fortress Europe is over, if you want it...