Journo Yasmin Whittaker-Khan, writing in the Fail on Sunday last week, claimed that a man she saw inciting the crowd, yelling abuse at the police and shouting ‘pigs out’ was himself of a porcine nature, a fully serving police officer.(1) 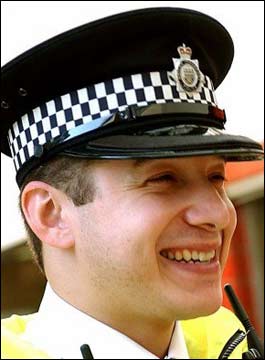 Now I was there, right at the front, (2) and on reading the story smelt a rat. I saw no such person, and the slogans of choice began with the demand ‘Let us Through’, before lapsing into old favourite ‘No Justice, No Peace, Sack the Police’ amongst others. And let’s face a Daily Mail journo is hardly the most trustworthy of sources.

That said, just because I didn’t see it, didn’t mean it didn’t happen so I’m prepared to keep an open mind and see how the story develops.

What did happen was the crowd surged towards the fence guarding the police and the innocent Swappies at the back pushed folk further into the fence creating a crush on the front line. Tensions heightened until eventually out came the batons and down (and up and over in some cases) came the fence.

None of this disproves the allegations made and if nothing else the Daily Fail vs the London Met is a good ‘un so the I'm prepared to keep an open mind.

Step forward narcissistic wannabe George Galloway. Around the same time as the article being printed Galloway was writing to the top cop Ian Blair (3) complaining that the police:

“behaved with a viciousness and lack of control such as I have not witnessed since the miners strike of 1984-85.”

Which shows how little Galloway has been involved with street political action over recent years.

He goes on to say:

“I made my way to the front of the putative march and purely by chance found myself in the hottest spot of the confrontation which followed. I was trapped there for the best part of an hour and a half, unable to move forward, back or sideways. Consequently, I was both closer to and for longer exposed to the events as they unfolded.”

“A young comrade told me ‘ I linked arms with Galloway and pushed him involuntarily at the police lines - he was dumb with terror before his minders extricated him’.”

Now I didn’t actually see this either, what I did see was Galloway making his way to the front of the crowd (albeit still a good few lines back) just as things were starting to get lively. He could well have been accompanied by a noble young class warrior because I could only see the top of his head.

Smiling at the thought of Galloway maybe getting a pounding on the front line where the things were hotting up nicely I turned my head back to the police lines, just a few seconds. When I then turned to check on Galloway’s progress he was nowhere to be seen.

Which doesn’t explicitly confirm what Bone’s comrade told him, but it certainly supports it.

Galloway’s letter reeks of an attempt by the Stop the War Coalition’s to undermine the autonomous action taken by some determined to show their anger at the State sanctioned visit to London of a notorious war criminal.

Step forward another week and now Galloway jumps on the agent provocateur bandwagon. Out he comes and names the so called police protester as the laughing boy pictured, one Inspector Chris Dreyfus.(5)

Galloway claims the Dreyfuss amongst other things:

“instructed a young demonstrator on the correct way to uncouple a crush barrier, which was successfully achieved and was subsequently thrown at the police, and was presumably one of the justifications for the deployment of a riot squad which eventually waded in to the protesters.”

Now I was there so I find it hard to know how exactly Galloway knows this, when put quite simply he wasn’t. It’s also not true that the riot cops waded into protesters, it was very clear it was there job to hold the line at Whitehall by any means necessary. What actually happened was the crowd autonomously made a decision to confront another police line which had formed at the top end of the Square.

Tactically this didn’t particular work, although in fairness it was largely all over. It was only later when most people had drifted off down the boozer that police snatch squads moved in to make arrests.

Now whilst a police provocateur wouldn’t surprise me neither would Galloway hijacking this story for his own self-serving agenda. He’s got form for that kind of thing, like, as an example, hijacking the entire anti-war movement to further his own political ambitions.

disclaimer number 1: In the heat of the action sometimes you miss things and everyone brings home a different story, so some may disagree with the specifics. I also left the front of the crowd confronting the police for a brief period (off licence innit) but after returning from trusty Tescos less than a minute away I remained to watch what was going on to return to the front.

In any event this was long after Galloway’s brief appearance, the fence was pretty much down by then and whilst a few hardy souls were still having a bit of a pop it was largely all over bar the shouting. But if anyone out there has a picture of Galloway on the front line then I’d love to see it. I won’t be holding my breath.

disclaimer number 2: This story in no way is intended to support the actions of the Metropolitan Police who viciously attacked and wounded several protesters unnecessarily. The police, not unlike Gorgeous George and his band of cronies, are cunts.