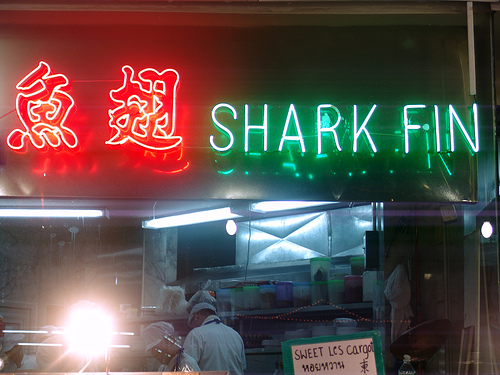 Shark Fin Soup Is Increasing in Popularity in Asia and Beyond

Voted in the top 20 eateries of the world, Hakkasan had been selling shark-fin soup since it opened its doors in 2001.

Famed for inspiring restaurants and retailers to halt their trade in threatened fish species, Bite-Back has been lobbying Hakkasan since the beginning of the year.

Campaign director at Bite-Back, Graham Buckingham, said: “This victory for the seas sends out a determined and resolute message to the restaurant world … sell shark-fin soup and be damned.

“The only reason shark populations are facing extinction is because of retail and consumer demand. Remove that demand and the shark fishing trade will collapse.”

Fortified by recent support from fellow marine conservation group, Sea Shepherd, Bite-Back has extended its ambition to absolve the UK from the extinction of sharks, by inspiring all traders in shark products to stop.

“If UK retailers adopt Bite-Back’s programme to halt the trade in shark products, we will have created a template for change that can be replicated across the developed world,” said Graham.

To accelerate an end to the trade, Bite-Back’s campaigns are working to devalue a dead shark. The UK’s fastest growing shark and marine conservation group plans to target any business that profits from the sale of jaws, cartilage, fins, teeth, meat and liver oil and encourage them to stop.

Bite-Back and Sea Shepherd are planning the next peaceful protest in Chinatown on Saturday 26 July.

Also in the firing line is Holland & Barrett for its continued sale of shark cartilage capsules and non-commitment to back down. Already more than 1,000 Bite-Back supporters have emailed the health store chain, leaving the group with no other alternative then to instigate a nationwide series of peaceful protests outside the offending stores.