Plan "C" as in Croydon

For Freedom of Movement and Freedom To Protest!

On the 5th of July 2008, people all around the world will protest
against the G8 summit 2008 in Japan. Globalisation has created huge
movements of people to the centres of capitalism. However whilst capital
- money and commodities - has been granted ever-expanding
freedom of movement, the movement of workers as migrants is subject to
increasingly complex and brutal systems of control.

We are calling for a protest against the UK Border Agency.
It is time to join forces, for freedom of movement, the freedom to
protest and equal rights for all ! 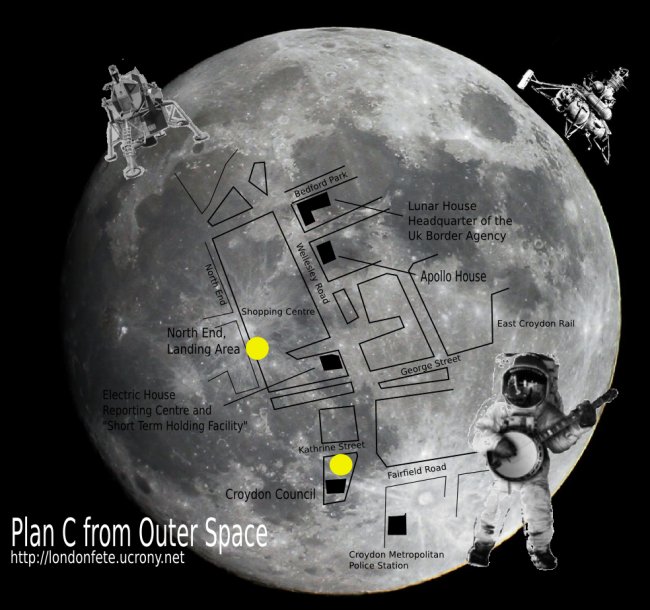 http://a.sanpal.co.jp/no-g8 whats going on in Japan

The "Plan" in detail:

10am (London earth time) meeting of critical mass/bikeride at Brixton Oval
(Ritzy Cinema)
10.30am take off towards Croydon

Phase 3: Places to visit and explore

- Just over the street there is Electric House, a reporting centre,
where hundreds of asylum seekers visit everyday from miles away to
fulfil their reporting obligations'. They are often arrested on the
spot, there are holding facilities ( short-term prisons) where asylum
seekers are being kept until they get transferred to an immigration
removal centre. ( 51.375089, -0.100787 )

Phase 4: Chill out and public amusement! A celebration of Freedom Of Assembly!
Bring your music, food and whatever you like.

Phase 5: The Take Off