Teachers, residents and campaigners in Wembley, Brent, North West London, have re-squatted the Wembley Sports Ground and are calling out for people to join them, squat the land and join the largest protest against the privatisation of the UK education system. 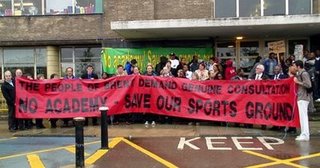 "We will fight and we will win!" Brent NUT Secretary Hank Roberts Declares War 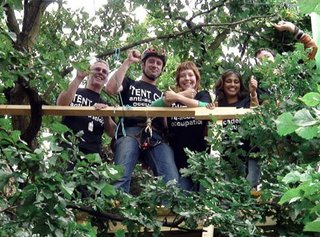 September 2007: Teachers Take To The Trees To Avoid Eviction 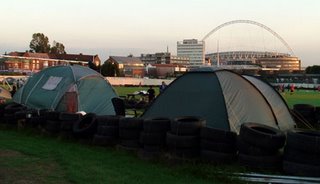 Wembley Tent City Under The Shadow of New Wembley Stadium 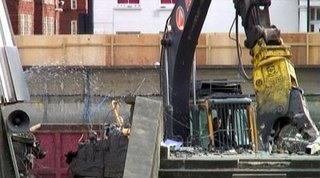 This Is What Privatisation Looks Like: Pimlico School Construction 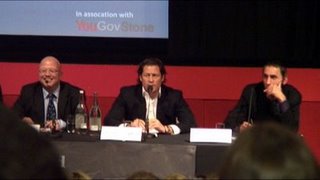 Brent local teachers, residents and campaigners have made a call out for people to help squat the land at Wembley Park Sports Ground on Bridge Road, next to Wembley Park underground station, and join the largest and most prominent campaign against the accelerating privatisation of the UK education system, the brain child of ex-prime minister Tony Blair.

The meeting held by council heads at Brent Town Hall, descended into farce, as the local community, angry that they were ignored during all public consultations with the council and Ark, were threatened with removal from the planning meeting and the Academy planning application decision to be made in secret, which would have been an illegal move on the part of the council.

That planning meeting approved the temporary housing of 200 school pupils in huts while the Ark Academy is built around them over the next two years, putting children in danger on a construction site, cranes overhanging the portacabins and temporary accommodation, just so the money flow from UK taxpayer to the privatised school investor, and the profit, can start by September 2008.

One reason the Wembley Academy opening date was moved forward from September 2009 to 2008 was because local opposition against the Academy and the privatisation of UK education has been so massive in Brent, Ark thought that advancing the school start date would crush the resistance.

Connections are being made with the Battersea Crane Disaster Group, the Construction Safety Campaign and the Pimlico school teachers who are also fighting the privatisation of their school by venture capitalist, and Tory party funder, John Nash and his company Sovereign Capital.

Pimlico school pupils are already being put at risk, as 1050 children are being educated while the school is demolished around them. Cranes are already overhanging their class rooms and construction debris and dust believed to contain asbestos is sweeping across the playground into classrooms.

But this situation, authorised by local and national government, will see 200 children being educated in the middle of a construction site. With the current safety record of UK construction sites, it draws serious concern for the wellbeing of the students.

But another concern is private investment taking over the UK education system, instilling their private, corporate, and religious individual beliefs in the education system.

The Vardy Foundation, set up by Christian fundamentalist Reg Vardy, already has its hands on several UK Academies and has since eradicated evolution from the schools, teaching only creationism.

The Wembley Ark Academy will be run by french/swiss and multimillionaire Arki Busson - long-term friend of Tony Blair - who is known to hold what can only be described as strict Catholic beliefs.

Ark is set to run 12 UK Academy schools, six of which will be opened by September 2008.

As construction work begins and the resistance turns to non-violent-direct-action to halt the project, construction could begin as early as this work, private security and police are expected to be employed to force eviction on the protestors.

The teachers, residents and campaigners of Brent have asked for all to come, squat the land, save the Wembley Sports Ground and surrounding green space for the local community and wildlife, and halt the further gentrification of Wembley.

Bring your mum, your brother, your dog - squat this land, join the protest, make a stand and to say no to the privatisation of UK education. Say no to education for profit. Join the Wembley Park Tent City Occupation.

Make a stand. Say no to privatised education. Get on the Metropolitan Underground line to Wembley Park, bring a tent, bring a friend, and make a stand.

Anti-Academy Teachers Take To The Trees

200 School Pupils In Huts On A Construction Site