Sarah Whitehead is a committed vegan activist who has dedicated her life to saving animals and helping people. She worked tirelessly as a nurse whilst rescuing and rehoming abused and neglected animals, as well as campaigning against the notorious Huntingdon Life Sciences. She is not someone to sit back and let animals be tortured and abused, she stands up and fights wherever she sees injustice and never puts herself first. 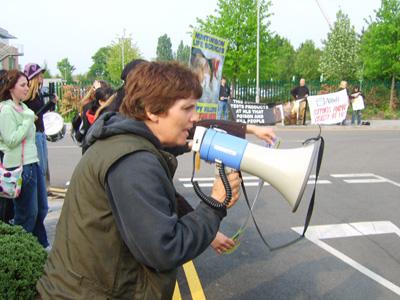 Sarah had been informed about an abused beagle. It was living outside in a wooden cage, and was muzzled at all times except for when it got to eat. The dog was made to wear an electric shock collar and the neighbours informed Sarah that they had witnessed beatings from its owners. The neighbours had also heard the dog screaming on many occasions.

The RSPCA had been called numerous times, but they failed to help this dog and left it with owners who had on occasions tied it to a radiator.

All avenues had been explored in trying to lift this animal from hell. The RSPCA, despite numerous complaints and visits to the owners, did nothing; even the police had been called by neighbours, but they just told them to call the RSPCA.

What else was Sarah to do, but rescue the beagle herself? How else could this beagle be saved? Knowing how much it was suffering, could anyone just leave this beagle to live in pain?

http://www.sarconline.co.uk/porter) which meant that if she re-offended within two years she would be sent to prison for that "crime". Even knowing this risk to her freedom, Sarah put the dog's life and well-being first and lifted him to freedom.

Unknown to Sarah she was under police surveillance during the rescue as part of Operation Achilles and the campaign against Huntingdon Life Sciences. Police followed her and watched her rescue the beagle, and then watched her take the dog to its second stage of its journey to it's new home.

However, once the beagle was handed over, instead of following the beagle in order to return it to its owner, they carried on following Sarah.
Luckily this means that the beagle is still safe and living in a loving home.

Some time later once the police had finished following Sarah around she was arrested, the police weirdly tried to accuse her of stealing the dog so that she could sell it for £500 to raise money for SHAC (Stop Huntingdon Animal Cruelty -

http://www.shac.net) Where this sum of £500 came from is anyone's guess and it shows how little the police understand the concept of animal rights!

Sarah went on trial for burglary in June 2008. She pleaded not guilty to the offence as she believed she had not committed a crime in rescuing this beagle. She told the court she believed she had acted reasonably and honest and that it was the right thing to do because the police and RSPCA had failed to save this dog. Statements from the neighbours were read in court which described the cruelty to the dog, the beatings, and the screams but bizarrely the jury took the view that Sarah should have left the dog where it was and she was found guilty.

The judge sentenced Sarah to two years in prison, nine months of this is from the suspended sentence she was on, and the extra 1 1/3 years is for rescuing the beagle.

Before going to prison, Sarah campaigned for the following groups, so please check out their websites:

You can write to Sarah at:

All activists should learn from this. When an animal is rescued assume you are under surveillence. Do not take it straight to it's new home. Arrange for cut-outs who can spirit the animals away. If we have more than one cut-out in a chain we can break the police surveillence chain and the animals will remain free.

Something similar happenedto Keith Mann when he resuced a load of mice, they were kept too long in their first refuge and the police got hold of them. If we risk jail then we should make sure that the animals will get away regardless.

The police are so pissed off that they can't return this animal to it's hell that they have put an appeal out on their website along with phone numbers to get the dog back!

Well done Sarah for bringing this dog to freedom, and well done all on the underground railroad.

Heroes the lot of you. When we win this war against torture and terrorism people will look to you as true heroes much like we look at those who freed human slaves as true heroes.