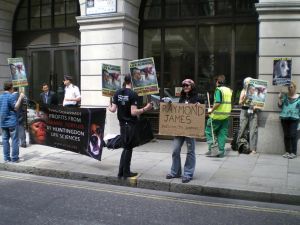 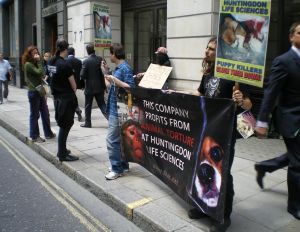 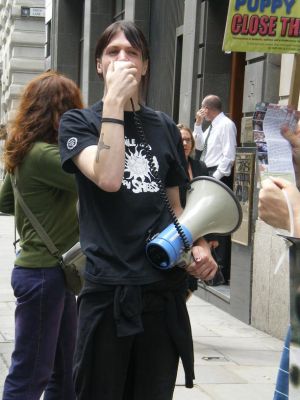 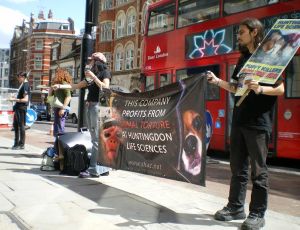 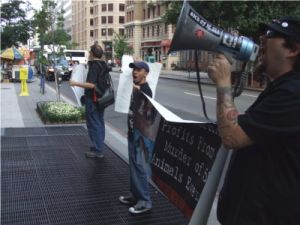 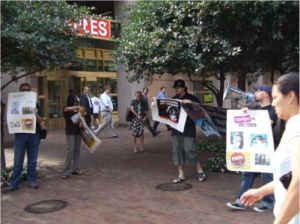 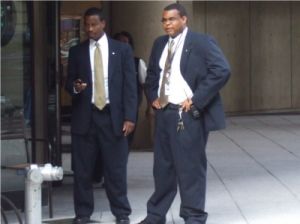 Another couple of SHAC financial targets were demonstrated against this afternoon. Firstly Raymond James, who own Eagle Asset Management (who have recently purchased nearly $15m of HLS shares).

We had a lively demonstration outside their office at 77 Cornhill. This company should know better than to retain these blood money shares, as this is a very convenient demonstration for us and they can bank on getting demos every week until they sell up.

Next we went to Goldman Sachs. This company continues to support and help NYSE / Euronext despite the fact that they have listed HLS on their ARCA exchange. This is disgraceful Goldman Sachs. Why support a company who allows HLS to continue torturing to death innocent sentient animals inside their laboratories. Despite Goldman Sachs's wealth and power, they continue to do nothing to help the suffering animals, and because of this we will be outside your offices regularly demonstrating. It's on a par with having all the food in the world, and refusing to feed your starving neighbour.

Until HLS is closed, SHAC continues.

HLS SUPPLIER AND SHAREHOLDER DEMOS IN DC, USA
More demos at Staples and start of demos at Raymond James

On June 27, 2008 DC Animal Rights activists took to the streets at the Staples on 19th and L St NW for the third time in a week. Activists handed out flyers to passersby and one person went to go talk with staples about their involvement with Huntingdon Life Sciences. After the concerned individual was kicked out of the store and told if he didn't leave the store manager threatened to call the police. Interesting point, that the manager, at first, thought the individual was asking how to stop the protestors, but when the concerned individual clarified he was asked to leave. After about a half hour hammering the message to Staples to "Cut their ties to HLS", Protestors proceeded to Raymond James and Associates, parent company of Eagle Assets, who is Huntingdon's largest intuitional investor with over $14 million.

At Raymond James, security quickly responded and using their cell phones, apparently calling police. For over 45 minutes there was a very loud protest and Raymond James and there neighbors know what to look forward to time and time again, until they sever their ties and divest from Huntingdon Life Sciences (HLS).

Protestors then went back to pay Staples a visit for the 4th times in a week. After approx another half hour at Staples, protestors vowed to be back and once again reminding Staples employees that there are office depot applications were readily available for them to make the compassionate choice Staples your upscale restraint neighbors are getting tired of hearing loud protests every week! Make the right choice and cut your ties with HLS!