Eat the G8 in Iceland!

The G8 summit will be held from July 7 to 9 of this year, at Toya-ko lake in Hokkaido (Japan). In solidarity with the worldwide plan of actions held against the kind of globalization promoted by G8 and the repression of Japanese police against activists, an action also took place in Reykjavik yesterday (5th July). 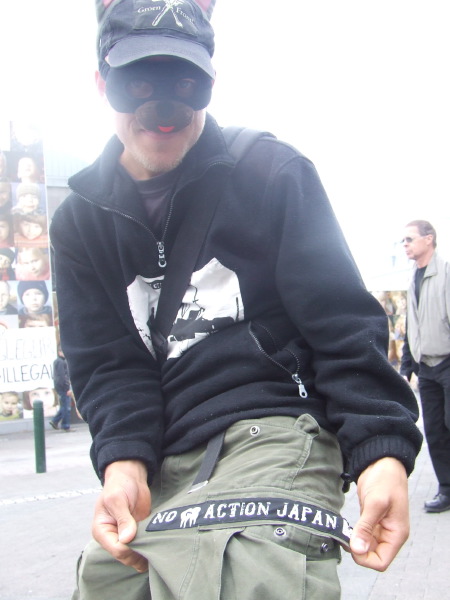 Solidarity with the anti-G8 actions in Japan! 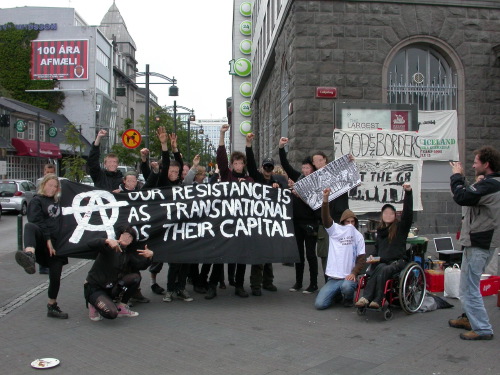 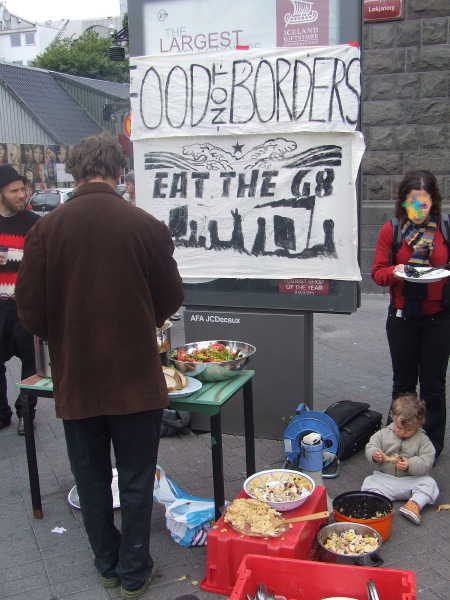 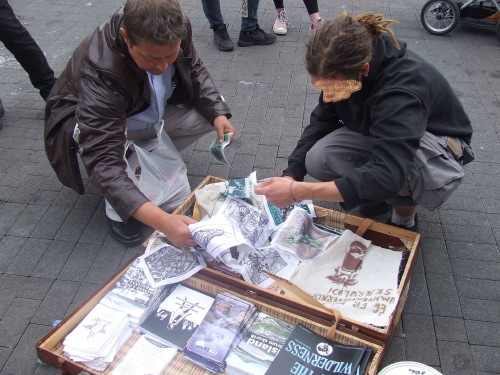 Distributing information: the Saving Iceland journal Voices of the Wilderness. 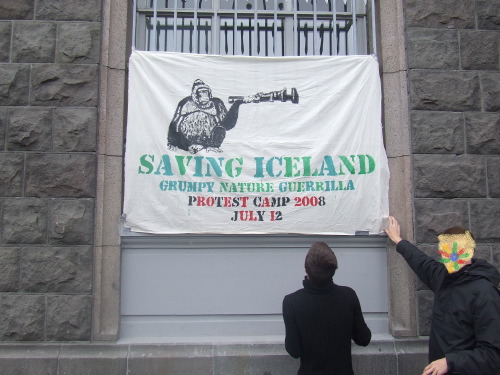 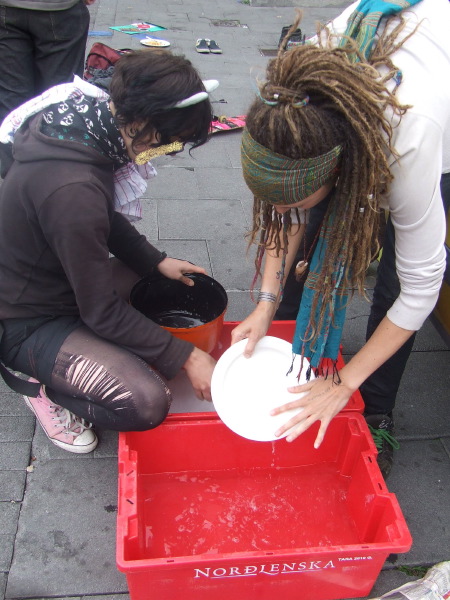 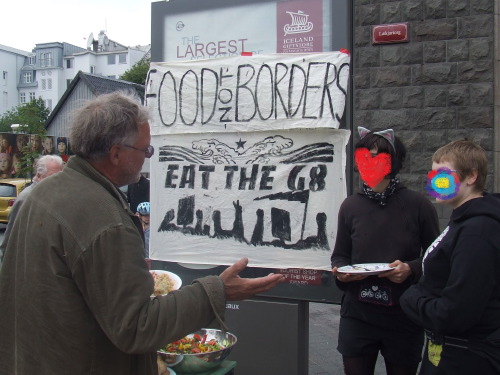 Informing tourists and Icelandic people about the destroying of Iceland. 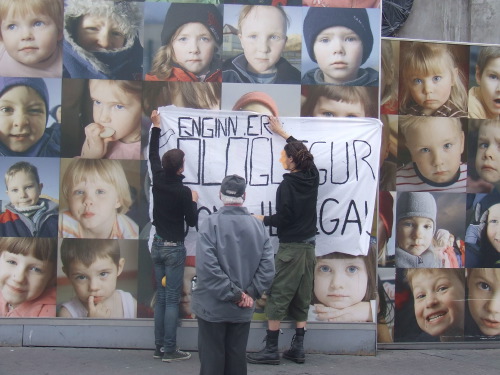 ''Enginn er ólóglegur'' (no one is illegal) + Stop all deportations! 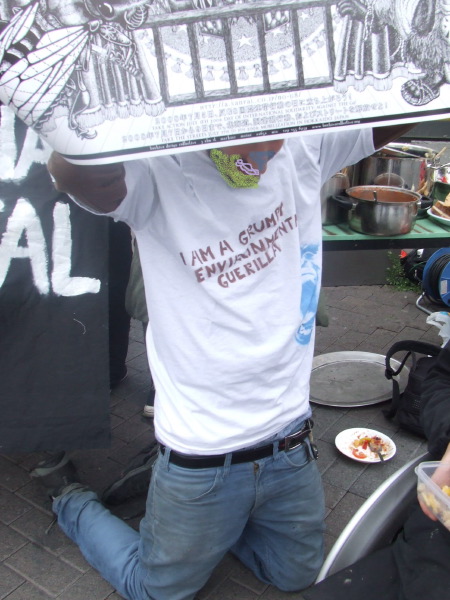 Beginning a few months ago, the energetic and enthusiastic Icelandic Food Not Bombs group has been serving food for free every Saturday in the center of Reykjavik. This is definetely a succesful activity where not only the homeless people from Reykjavik, but also the Saturday afternooon shoppers, passersby and promenading tourists find their way to a healthy vegan lunch, prepared with ingredients which are not any longer considered as worthy for consumption by our throw-it-away society.

Saving Iceland Action Camp
Under the motto of Eat The G8! information was given by word of mouth, leaflets, the journal Voices of the Wilderness and written articles. The information connected the socially unjust, ecologically disastrous and economically destructive world which the G8 serves to propagate with the ongoing destruction of Europe’s largest remaining natural wildernesses, namely the ecologically rich Icelandic highlands.

Activists of the international Saving Iceland collective anounced at the same moment the action camp that will start on July 12. The protests and actions will be aimed at the global heavy industry in general and specifically at the huge dam project and geothermal powerstations in Iceland servicing the greed of multinational aluminium corporations. Targets of their actions will be Alcoa, Elkem, Century Aluminium (a daughter company of RUSAL), Rio Tinto Alcan, R&D Carbon Ltd., Hydro, Icelandic Hi-Tech Industry, The Geostream Services Group, etc.

Iceland is now becoming one of the largest aluminium producers in Europe. Investors enjoy low business taxes and minimal environmental regulations. The aluminium smelters are supplied with hydro-energy (generated by gigantic dams and reservoirs) or by geothermal energy. Iceland currently emits 17 tonnes of greenhouse gases (GHG´s) per capita per year in comparison to the European average of 11 tonnes, and will achieve a 63% increase on 1990 levels by 2012 if all industrial plans go ahead. Large dams are environmentally disastrous as they involve destroying rivers, the source of fertility to nourish the land and oceans. They also have several serious implications for climate change. Geothermal plants have serious environmental consequences, enormously aggravated by their absolute exploitation for energy to supply power hungry and polluting aluminium smelters.
Furthermore no war can be ended successfully without using enormous quantities of aluminium – and destroying them again. Aluminium is the core metal for modern warfare, indispensable for tanks, missiles, fight planes and nuclear weapons.
During the Saving Iceland protest camp this summer a week of international solidarity actions will take place from July 21st to 27th. People who cannot come to the camp but want to support the resistance against heavy industry in Iceland should take a look at Saving Iceland's target brochure (which can be found on www.savingiceland.org) and use their imagination. Contact Saving Iceland with text and photos for the actions so that they can be published on the website.

Food Not Borders
In addition to showing the fatal link between the G8 and ecology, the action also demonstrated by means of the Food Not Borders banner the cruel immigration legislation upheld by the western (G8) countries, particularly with regards to Iceland's recent deportation of Kenyan political refugee Paul Ramses. Last week he was deportated from Reykjavik to Italy and consequently separated from his wife and one month old son. Because of his participation at the municipal elections in Nairobi (Kenya) in December 2007 he fears for his life in his fatherland. On the early morning of Thursday the 3rd of July political ativists blocked the runway at the the airport to stop the plane in which Paul Ramses was being deported. The activists were arrested and released later that the day. Paul Ramses had been working together with Icelandic people at a school project in Nairobi. He had also been active in the Icelandic charity organisation ABC Children’s Aid International.

Various advocates and human rights groups have declared that they will follow up the case. Various European No Border action groups have been contacted. In the past few days other protest actions have taken place against the deportation. For three days in a row, people from Iceland and from other countries have been gathering in front of the department of Justice and Foreign Affairs to speak out against the inhumane policy and behaviour of the Icelandic government. A petition has started and will be handed in on July 10. On the night of July 5th activists glued the locks of the department and gave its door red paint drippings, to symbolize the blood that the Icelandic government has on its hands for sending Ramses to his death. The slogans ''Enginn er ólóglegur'' (no one is illegal) and ''Stödvid allar brottvisamir'' (stop all deportations) were spraypainted on the front of the building.

For the comrade kneeling down and throwing a gang sign in picture 2.

You are trying to come here and tell the people of this country how we should live in our contry. The world has far bigger issues than the dams and geothermal power plants in iceland. What environmental way do you propose we power our computers? Or turn on our TV's? Nuclear? Coal? Oil? You truly have attention issues.