A group of local trade unions and community groups fighting against plans to privatise local services yesterday confronted the Labour-run Council behind them. Under the banner of "Save Our Services in Lambeth", the group, including local teachers, lecturers, local government workers, tenants and leaseholders packed the public gallery at Lambeth Town Hall and quizzed the Cabinet Members responsible for widespread cuts and privatisation. 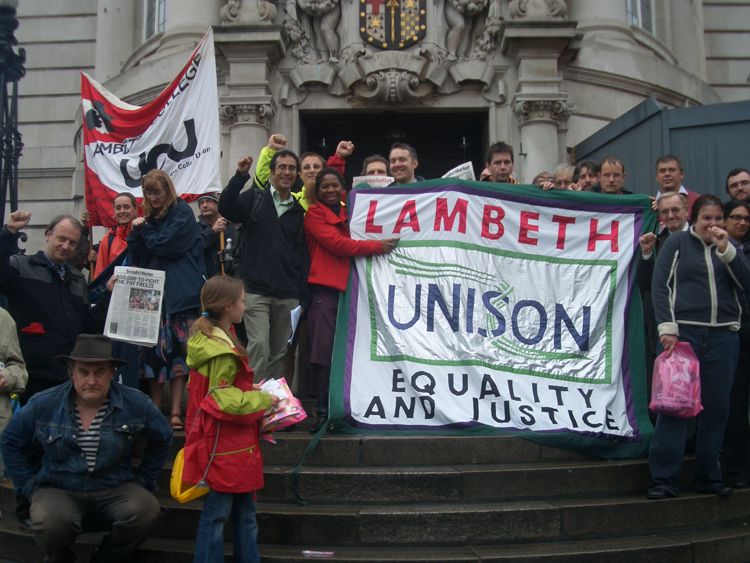 Save Our Services Campaigners Outside Lambeth Town Hall 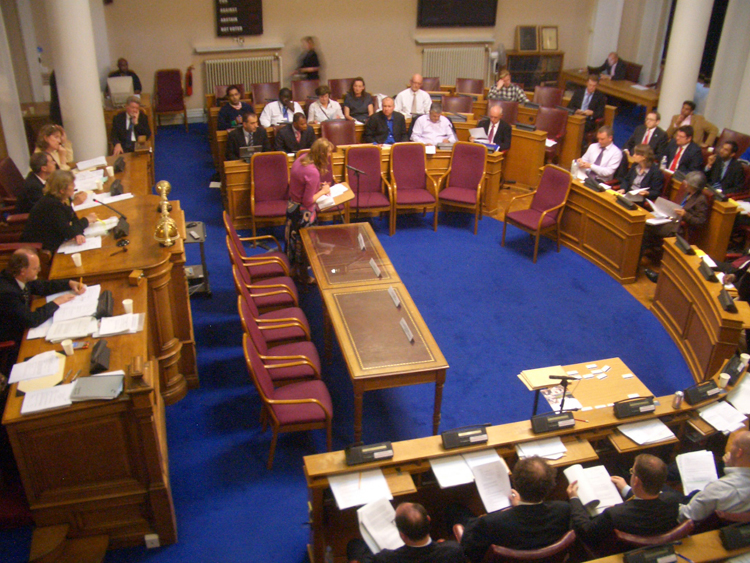 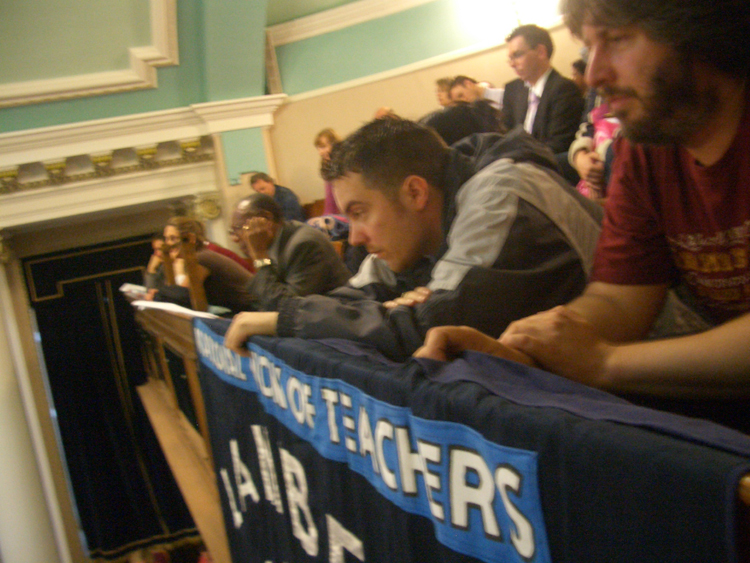 Prior to the meeting, representatives of the NUT, UNISON and UCU had submitted the following question:

"Public sector unions are very concerned about the increasing privatisation of our services. Our schools are being given away to private sponsors in the form of academies where the local authority has no say in any decisions made by the school. Our FE colleges are facing cuts in courses and an increased reliance on the private sector leading to an end of the ethos of life long learning for all. There is a proposal to hand over sections of the council's work to private contractors who will be unaccountable to residents.

Do councillors believe that local services should be accountable to us the voters and run by those that we elect?"

In a written reply, Councillor Paul McGlone, Labour Cabinet Member for Children and Young People, bizarrely argued: "I disagree that schools are being handed over to the private sector" and worryingly did not support the assertion that local services should be accountable to local people. Cllr McGlone’s response was met with boos and jeers from the public gallery.

When quizzed in the Council chamber by Sara Tomlinson, a local teacher and NUT representative, the Labour administration ignored the continued calls to grant residents a ballot on their controversial privatisation plans.

Save Our Services is a broad campaign uniting different interests who are opposed to the establishment of privately funded academies, cuts to service provision at Lambeth College, and the planned privatisation of housing services – including the Borough's award winning call centre.

Under the scheme, private companies will get ten-year contracts worth over £1.2 billion to run local housing services including essential provision such as caretaking, cleaning, and gas and lift servicing. Contractors could be given the responsibility for specifying, carrying out and even monitoring their own work. Members of the trade union UNISON who work for the Council are being balloted for industrial action in a bid to prevent these proposals going ahead.

At Lambeth College, staff are already losing jobs and "unprofitable" courses are being cut. Senior managers want to spend £2.7 million less on education services for local people. Courses are no longer affordable or accessible to many in the community.

Lambeth is also looking at allowing hedge fund speculators, ARK, run a new academy in the heart of Brixton on Shakespeare Rd). These privately educated city financiers will control a school in the middle of Brixton totally unaccountable to the local council. That means that taxpayers still pay for the schools but our local authority has no say in admissions, curriculum, exclusions and the pay and conditions of teachers and support staff.

Save Our Services in Lambeth are organising a march hand rally on the Thursday 17th July, meeting at 12pm at Lambeth Town Hall, to coincide with industrial action by UNISON and UNITE local government workers against a government imposed pay cut.

There has also been discussion of the campaigners contesting the next local elections in 2010 where incumbent councillors have failed to oppose the Labour administration's agenda of privatisation.

1. Privatisation of council services has been tried before in Lambeth. In 1997 Capita took over control of administering Lambeth Council's housing benefits service on a seven-year contract. By 2001 the Council was forced to bring the service back in house. At one point Capita had over 55,000 outstanding enquiries, and caused untold misery to claimants who were unable to get the benefits they were entitled to.