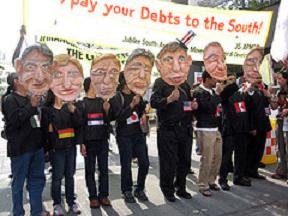 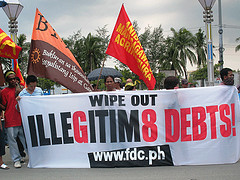 MANILA, Philippines -- This year’s G8 summit in Japan, gathering the world’s most advanced industrial economies is happening amidst a global crisis on oil, food, poverty, and environment – a problem unequaled since the first G8 summit in 1973 concerning the oil crisis and the subsequent global recession.

However, aside from the worldwide multiple crises G8 is trying to address, the exclusive group is also facing a crisis of legitimacy and credibility. It’s “leadership” over the world’s affairs and the flawed neo-liberal development paradigm it imposed on poor nations are again in question if not totally being rejected.

Thus, we from different social movements in the Philippines add our voice in calling for an end to G8’s domination over the rest of the world. G8's impositions on the systems of international finance and trade, their quest for carbon-based industrialization, and the intervention of their transnational and multinational corporations on the affairs of the developing nations only brought unmitigated suffering to the poorest among us.

G8 has not only failed for the last three decades in effecting economic development, redistributing wealth and global governance, it is also widely seen as one of the main culprits in imposing grave international transgressions such as the following:

On the Debt Trap, Illegitimate Debts, and Crisis-inducing Conditionalities.

The financial institutions and commercial banks controlled by G8 countries have long been pushing loans aggressively to the countries of the South, leading to a recurring debt and fiscal crisis especially on Latin America and South East Asian countries. The servicing of these debts, most of which having onerous interest terms, eroded the capacity of debtor countries for adequate social and economic expenditure, even if most of these debts had been transacted under questionable, undemocratic, and illegitimate terms, and had failed to benefit the people of these countries.

Furthermore, the conditions attached to these loans - privatization, deregulation, and liberalization - expose developing economies to the harsh conditions of a lopsided global market and reduce state protection for the most vulnerable social sectors.

The main instruments of G8 in imposing their vision of a world trade arrangement, the World Trade Organization (WTO), only worsened the underdevelopment of many poor nations like the Philippines. The reciprocal opening-up of the economy as forwarded by WTO imposed an unequal global trade, under the guise and semblance of equality and development. In fact, while employing the rhetoric of free trade to open up Southern markets and prevent Southern governments from introducing subsidies for their commodity producers, G8 countries are providing huge subsidies for their own industries, strangling competitor Southern industries in the process and effecting wide-scale unemployment and poverty in the South.

Moreover, there had been a systematic bias toward rich countries and multinational corporations, harming smaller countries, which have less negotiation power. In the proceedings alone, most critical decisions ended up being decided in the so-called “Green Room”, where members of the G8 end up controlling the stakes and influencing the direction of the talks.

The G8 countries have experienced massive carbon-based industrialization in the past century, contributing to the build-up of green house gases in the atmosphere and thus, accelerating the rise of global temperatures. Worse, G8 countries like the United States refuse to recognize accountability of the current situation and refuse to take responsibility for funding important mitigation, adaptation, and clean technology-transfer mechanisms.

As if they’re history is not enough, G8-controlled multilateral banks like the Asian Development Bank insist on funding coal-based power generation, packaging them as “clean technology” that Southern countries should adopt in their drive towards industrialization. Concomitantly, the private sector players of the G8 countries, especially the members of the European Union, are building industries to support and reap profits from the drive towards clean energy.

On the Food Crisis.

The current food crisis is partially an offshoot of the earlier crisis in the financial markets – as speculative investments move away from housing and other vulnerable industries, they move closer towards food commodities, pushing prices higher and allowing transnational corporations of G8 countries such as the US-owned Cargill and partly US-owned Maseca to reap profits from rising prices. This, while G8 governments are busily introducing loans to liberalize the Southern agricultural sector, imposing a “development” model which only deprived many poor nations the capacity to become food self-sufficient as they geared local production towards export, especially bio-fuels, while making them dependent on importing food stuff especially those dumped by Northern countries.

The Philippines is not exempted from this. Japan, a G8 member and host of this year’s summit, forged an agreement with the deposed Estrada government to implement the Grains Sector Development Program (GSDP). The program is an integrated package of institutional reforms, investments, and Technical Assistance designed to privatize the state-owned National Food Authority (NFA) while liberalizing grain trading and encouraging greater private investment in the food and grains sector. As conditionality, it forced the compliance of the government to all international trade agreements on corn-tariff reduction.

Given this, we call on the G8 to get out of the way, end its dominion over poor countries and its imposition of fake solutions to the world’s problems.

We also demand the Philippine government to end its subservience to the policies and pressures of G8 member countries, especially those that have gravely contributed to the massive economic quagmires the country is experiencing right now.

Focus on the Global South,

Initiatives for Dialogue and Empowerment through Alternative Legal Services (IDEALS),

SAPPORO, Japan – Debt campaigners from Asian countries and other parts of the world today reiterated their challenge against the rich nations to do more than promise more aid to Africa. They demanded that the G8 governments cancel all illegitimate debts that people of developing countries are being forced to pay.

In a public forum in Sapporo, around 200 kilometres from the venue of the official G8 Summit in Lake Toyako, Hokkaido, members of Jubilee South- Asia Pacific Movement on Debt and Development stressed that debt is a global problem, affecting almost 100 countries in the world—from the regions of Africa, Latin America and the Caribbean, Asia and the Pacific. JS-APMDD said the total external debt claimed from Southern countries is about US$2.7 trillion.

Lidy Nacpil, JS-APMDD coordinator, said that illegitimate debts are those which cannot be rightfully claimed as debts of the peoples of the South.

“Illegitimate debts involve the gross violation of basic assumptions of debt contracts, as well as widely accepted ethical, social, political, economic, environmental values, standards and principles. They cause harm to the well being of the people and communities in whose name the debts were incurred and who are the ones paying for these debts,” explained Nacpil.

According to JS-APMDD, these violations can be found in any one or combination of the following: circumstances surrounding the contraction of the debt (can be immediate, can also include broader, historical context); the nature of the contracting parties themselves; the relationship between the contracting parties (and the imbalance of power which shapes the financial transactions and relationship); the terms and obligations of the contracts; the implications and impact of attendant conditionalities ; how the funds were used; and, the impacts of servicing these debts.

“The G8 governments bear part of the responsibility for much of the illegitimate debts claimed from developing countries – as lenders of bilateral debts and as major shareholders of international financial institutions like the World Bank, the International Monetary Fund and the Asian Development Bank,” stressed Nacpil.

During the forum, the San Roque Multi-Purpose and the Bohol Irrigation Projects in the Philippines and the Jamuna Bridge Project in Bangladesh were presented as concrete cases of illegitimate debts.

Milo Tanchuling, secretary general of the Freedom from Debt Coalition (FDC), said that as of 2007, the Philippines has US$6.23 billion debts claimed by G8 countries, or 45.6 per cent of the country’s total foreign debts minus the bonds. More than US$5 billion of these debts or almost 39 percent is claimed by Japan alone.