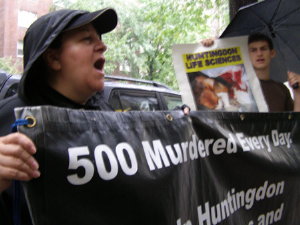 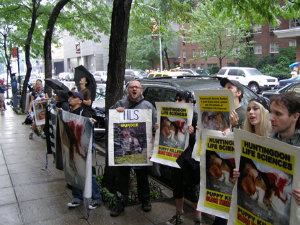 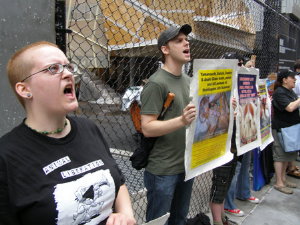 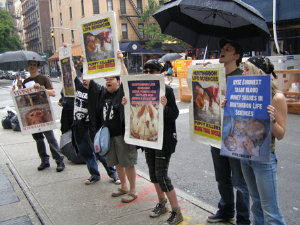 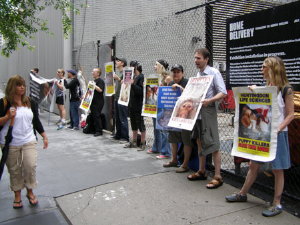 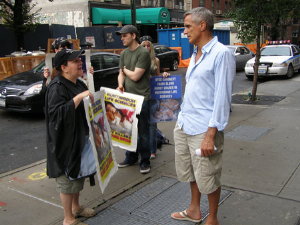 Usman Nabi, please talk to your company about dropping this stock - Huntingdon Life Sciences is a company that kills 500 animals a day to test crap like Splenda and bleach. They've been caught on video punching beagle puppies in the face, strangling animals, simulating sex with them, and cutting monkeys open alive and without anesthetic.

Usman Nabi, the company you work for is funding death and torture at Huntingdon Life Sciences - please sell your shares of LSR (HLS' stock symbol) immediately!

Wash your hands of this disgusting laboratory and all the scumbags who work there!

Once again activists in New York City paid a visit to Peter Laventhol's home near the MOMA, to protest Laventhol and SPARK Management's investments in Huntingdon Life Sciences, a brutal animal testing lab that kills 500 animals a day for crap like bleach and toothpaste.

HLS has been caught out in 6 undercover investigations, time and time again proving their record of cruelty is not exaggerated. Technicians have been caught punching beagle puppies in the face, strangling and choking animals, and cutting open primates alive and without anesthetic.

Peter Laventhol, owner of SPARK Management, your money is funding this cruelty - how can you support HLS when you know what's going on?

At perhaps the most productive of the demos, activists visited the home of Peter Delahunt who works at Raymond James (who in turn owns Eagle Asset, the company that bought roughly 14 million dollars worth of HLS stock recently).

Activists were only chanting for a short time before a smiling and mostly friendly Peter Delahunt came outside to find out why people were outside his building, making noise, and accusing him and his company of animal abuse.

Mister Delahunt was very friendly and reasonable and had a good conversation with activists. Activists were surprised to learn that Mr. Delahunt had no idea of the cruelty that goes on at HLS and his jaw dropped when he learned some of the facts and stories.

Hopefully protesters won't have to return to this location and Raymond James/Eagle Assets will have sold their shares before the next day of demos.