25 minute lecture and discussion about how 9/11 and 7/7 were almost certainly 'Business as usual' for Western Intelligence Agencies. Martin explain that they have a grisly record of killing their own countrymen and then blaming the attack on someone else. The so called 'false flag' black operation. 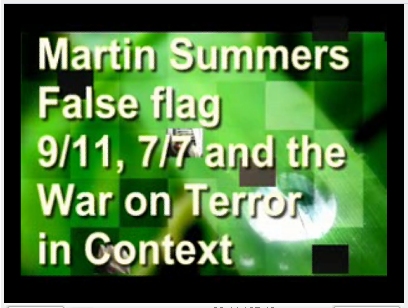 Martin takes us through some of the most well documented examples of false flag attacks since the second world war.

He looks at the Irish bombings where Brigadier Gordon Kerr's Force Research Unit assisted the Loyalist terrorists to kill innocent Irish people on the Streets of Dublin and Monaghan.

He also takes us through NATO's Operation Gladio which was behind the 'terrorist' kidnapping and assassination of former Italian Prime Minister Aldo Moro amongst many other attacks on innocent European civilians.

Plus the precursors to the 9/11 False Flag attack - the Moscow apartment bombings of 1999 carried out by Vladimir Putin's FSB, the successoe tho the KGB.

Martin Summers is a former Bosnian aid worker with CAFOD, and has worked for the New Economics Foundation and Amnesty International. His book 'Market Failure: A Guide to Eastern Europe's Economic Miracle' is here