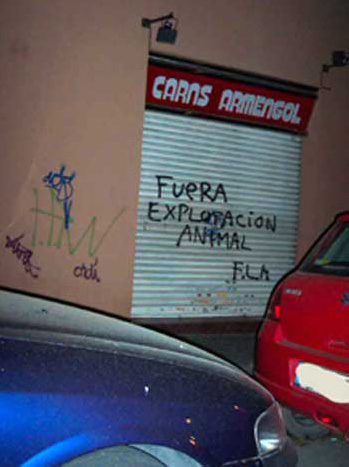 "Animal liberation volunteers are claiming responsibility for the direct intervention in the animal farming industry, as an act of solidarity with Sarah Whitehead who is currently behind bars for doing the right thing. While Sarah remains locked in her cell for freeing animals from pain and misery, volunteers successfully liberated 50 Turkeys from an Eastern factory farm.

This action means these sentient beings were spared from constant suffering, their lives destined to be cut short with the blade of slaughterhouse machinery. No longer will their existence be to fill the mouths of a salivating and greedy nation. They now exist as valued individuals, remaining happy and free.

Love and liberation for Sarah and all other captive individuals!
Animal Liberation Front"

"Yesterday evening shutters of various businesses linked to animal exploitation in Badalona (Barcelona) were painted. With the phrase: 'Animal Exploitation Out' and signed F.L.A.

To our brothers and sisters.

For other animals, for your health, for the environment, to eradicate poverty... For all this and much more... Go Vegan!"

The Mexican ALF prepared a stinking blend of rotten fruit and other things that looked like real vomit and went to the multinational murderer KFC. We decided to throw it in its entry and to spill it on their windows.

The sabotage will not stop!

According to local media, a fur shop in Turku (Turkishuone Rousku Markku) has been damaged by fire. Activists entered the store through a broken window, piled fur coats on the floor and set them on fire. The intials 'EVR' (Eläinten Vapautus Rintama/Animal Liberation Front) were written on the window.