After nine hours the "Bolzaneto trial" against 45 members of police, jail staff and doctors ended yesterday evening in Genoa. The accused persons were under investigation for the misuse of authority, constraint, abuse, intimidation, and falsification of evidence. 300 demonstrators were arrested during the protests against the G8, most of whom were brought to police barracks that were being used as temporary jails. 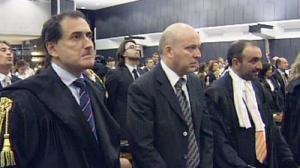 Concerned activists documented beatings, affronts, fascist slogans and systematic humiliations during the trial. Due to the fact that the police pretended that most of the police officers on duty at the time could not be identified, only police officers in charge were put on trial. Yet, 30 of the accused were acquitted because of “lack of evidence”. The highest sentence was 5 years and 8 months for the chief of security of the jail, Antonio Biahio Gugliotta. The jail doctor Giacomo Toccafondi, criticized heavily for his brutality, received a sentence of only one year and two months.

The convicted have announced that they will appeal. This means that, according to Italian law, the sentences will be prescribed.

In the Bolzaneto trial 300 concerned persons appeared as joint plaintiffs, some of whom are relatives of abused protesters. Half of them are from foreign countries. The judge Renato Delucchi granted each of them an "immediate compensation" between 2,500 to 15,000 € .

Until last week it was unclear whether Berlusconi’s new "security law" may hinder the conclusion of the trial and the sentencing of those charged. Berlusconi is under investigation for suspected corruption. He is calling for the abandonment of all trials with an expected sentence of less than three years that concern events taking place before mid-2002. The new legislation will be ratified at the end of July by president Giorgio Napolitano. In order to speed up the process, the lawyers have decided to drop the joint plaintiffs’s case.

Lawyers and solidarity groups have criticized the sentences heavily. Although the judge recognized that crimes were committed, the sentences were far lower than what the state prosecutors demanded.

In autumn, another judgement against the police is expected. In the "Diaz trial", police officers who beat up sleeping activists will be tried. 29 police officers in charge are amongst those accused of the falsification of evidence. One of the state prosecutors, Patricia Petruziello, declared that 4 of the 5 persons arrested in the Diaz-school experienced "inhuman and unworthy treatment" according to criteria of the European Court. Italy is not a signatory to the International Convention on Torture. Therefore, the charge only refer to abuse.

Whereas police officers have been exempt from punishment so far, activists have been given high sentences. Last year in November, 25 Italian protestors received draconic sentences of up to 11 years. Being arrested close to where skirmishes were happening was sufficient. This year in June, a French activist was sentenced to five months because she was the only one to climb oder the security fence in the city centre of Genoa.

"These sentences are an attack against social movements and the right to resist", the Italian solidarity group SupportoLegale writes. "Genoa was a revolt of 300 000 people", the Gipfelsoli Infogroup comments. "The resistance against the police attacks was absolutely justified.”

Next week, the seventh anniversary of the G8 protests in Genoa will be commemorated with several events to mark the occassion. On July 19th, Haidi Guliani, the mother of assassinated Carlo Giuliani, together with others, will invite people to participate in the preparations for the protests against the next G8 summit 2009 on the island of Sardinia. On July 20th, the annual memorial ceremony for Carlo will take place at the Piazza Alimonda. Solidarity groups from Genoa and from other countries have organized presentations and debates in Palazzo Ducale, the meeting place of the G8 in 2001.

A society in which state representatives have less responsibility than protestors is "an ugly society" declares the joint plaintiff lawyer Laura Tartarini. A detailed comment by the lawyers is expected for today.

The Emotional First Aid Network, consisting of Activist Trauma Support and Out Of Action will offer open hours and workshops this week in Genoa. We aim to provide information and support for people experiencing psychological effects of repression.

Open hours at San Luca Offices: 3-5pm
Workshops and Chill Out Space at Burrida Social Centre: 6-10pm
The events will start on Fraday, June 18 and are all tbc


This BBC News report suggests that most or all of those involved may never go to jail - because of appeals and because of Italy's "statute of limitations":

Italy is a country slipping towards facism...

And this week a gay man won compensation after being discriminated against for his sexuality: