Report from mass-media (zougla.gr): A "red beret"-styled incendiary attack by around 20 hooded persons was realised at 5:30 in the dawn against the Police Station of Perama. The unidentified persons riding 10 motorbikes targeted the parked patrol cars outside the Police Station. The youth hurled two molotovs and a firework to provoke confusion and then threw 41 gas canisters beyond the police patrol cars and next to the police motorbikes. From the fire caused, 3 vehicles were totally wrecked, and another two seriously damaged. More than 4 motorbikes were burnt. Local residents were terrified from the loud blasts. Policemen found dozens of gas canisters near the police station. The perpetrators of the attack, on their way back, set a garbage bin on fire and set it on Irinis Avenue as a barricade, to make the police hunt after them more difficult.

A translation of the communique sent via e-mail to 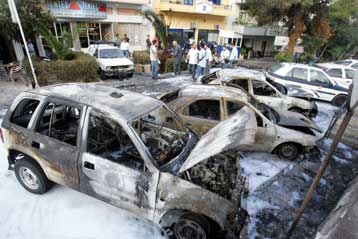 CHARGE IT ON THE FIRE

One and a half month ago, the residents of Lefkimmi, protesting the function of a garbage dump in their area, set up barricades and attacked with stones, sticks and molotovs the MAT (note: greek riot police). During the clashes, one women got killed, when the MAT hit a bike with two young persons and they fell on her. One of them was injured severely and also face legal charges. Nothing new up to here. The fact is that the cops murder, traffick heroin, sell night patronage, trafficking, while their guns seem to be suprisingly going off on people, we are aware of that. What bores us is this constant somnambulist return to loyality on behalf of those who have experienced such a situation. What annoys us is that soon, the residents of Lefkimmi will return to their little decent lives. Maybe even some of them where the same that, when back in 1996 during the prison insurrection at Corfu, when the prisoners where shouting for freedom, they requested the state to intervene for their safety. So, let's give a second thought, all of those who for one and only moment clashed with the MAT and experienced repression, when the next time from their couch will ask for more policing and with their finger armed thwy will show towards the direction a bank robber, or a prison escapee, or a wanted fugitive, or a hooded anarchist left.

The women murdered and the youth injured we didn't have the chance to know them.. We are n't even humanitarians to act in terms of sympathy. All we want is the uniformed of MAT to keep in their minds that nothing will remain unanswered.

On Thursday July 17, we selected to attack the police station of Perama. The target was selected by right of our desire to bring a vast destruction to the police cars parked outside the station. It was our conscious selection not to set on fire the building itself, to avoid any injury on prisoners possibly kept inside. On what it concerns the target, it has to do with what we name as urban guerrilla "REVOLUTION NOW AND FOREVER".

We had warned after our attack against Sprider, that our activity will be illustrative of our willfulness in case of the imprisonment of our comrades Marios Tsourapas and Chrissostomos Kontorevithakis continues. Our comrades may be released, but in the war we have declared there is no place for any agreement between us and our enemies.. We are self-exiled for ever from the country of cease-fire.

Our consciences swirl inside a failing social tissue, leading to this crippled complex acting as a backboned of all authoritarian mechanisms of this sick world. We find ourselves somewhere inside it, doing whatever we can, teets and claws, to counterstroke it. Nowone can be safe anymore. We have a war and you are the enemies. So learn that the police and its "caring informers" our not our only target. Our target is the diverse perception of servitude of the modern subjects, blinded from the suburban microbe hug voluntarily their chains. And if some of them keep rolling in a roulette waiting to end up in some lucky number, abandoning their lives in luck, there are others awaiting, that keep in mind they live only once and they owe it to their ego to take a dignified path in the everyday life surrounding them, chosing to drop-out.

We are also some of them, organizing our desires with rage and consciousness and not with blank ammunition for inertia and scaremongering. We are the agents of venom for your world. Disgusted at anything gives us the sense of security and order. Your police stations are always a target for us. Gangs of Conscience are everywhere. They form an open challenge for everyone that wants to set on fire whatever keeps us captives. Someboday from the Gangs of Conscience can be the person standing next to you, one other watching a police station, some othere hanging aroung outside a bank, two persons talking quietly, a gang in the piazza setting its own deals, during the night.

Finally, whoever has no memory, cannot have a perspective. We do not forget the murdering of the antiauthoritarian Christoforos Marinos, during the summer of 1996 by the cops. The historical continuum of the metropolitan guerrilla war connects the past with the present prefacing the future, between all those who dared and dare the assault to the skies.

Note: previous actions by the Gangs of Conscience: