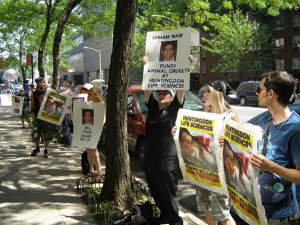 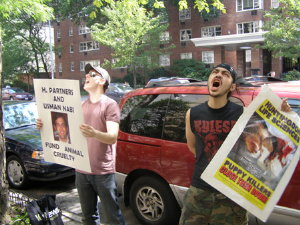 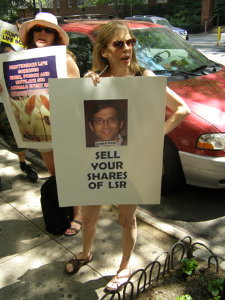 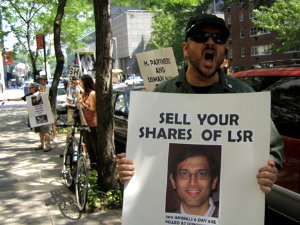 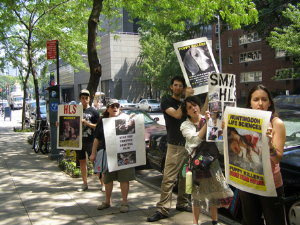 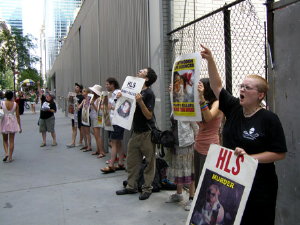 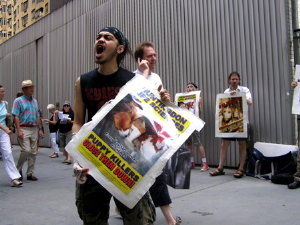 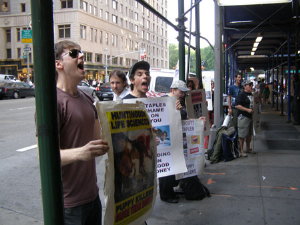 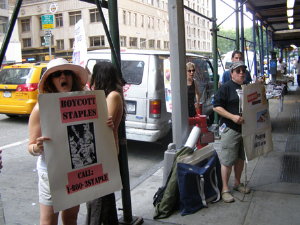 Once again activists gathered at the home of Usman Nabi, partner of H Partners, owning close to a million shares of LSR stock. This time, for the first time, joined by squad cars from NYPD and a special appearance by an NYPD lawyer, who announced that he was there to make sure that the terms of the restraining order were adhered to and that everyone remained safe. Protesters thanked him for his diligence and attention (*rolling eyes heavenward*) and told him that WAR has stayed within the confines of the restraining order every weekend for the past two years and that there hasn’t been a single problem.

Undeterred by the intrusion of the NYPD, activists displayed newly created signs made especially for Usman Nabi. Each sign had a high resolution color photo of Usman along with his name in big bold letters. Protesters raised their voices in unison…..”If you want to get some rest, cut your ties with HLS”. The beautiful sunny afternoon saw many of Usman’s neighbors entering and leaving the building. Protesters wonder what they think of their neighbor?

”We will never back down, until they stop the killing”…. chanted the 15+ activists, who had gathered to name and shame Usman Nabi and H Partners. They exhorted Nabi to follow the exemplary example of Eagle Asset/Raymond James, who sold over 500,000 shares immediately after finding out about the kind of company Huntingdon Life Sciences really is.

It was a busy afternoon for MoMA (New York City’s renowned Museum of Modern Art) as they had some outside activities scheduled which greatly increased foot traffic along 54th Street. Activists unfurled their large full color banner showing the bloody mutilated remains of a beagle puppy killed at Huntingdon Life Sciences. Talk about an attention-getter. Almost everyone passing by stopped to stare and showed their disgust for those who made such an atrocity possible.

Once again, Peter Laventhol’s kindly neighbors came down to chat with activists and to let them know that they had made sure that every resident of the building knew why activists were making regular stops there. Despite the unusually high temperature, activists coolly explained to passersby why they choose to spend a beautiful Saturday afternoon trying their best to influence Peter Laventhol of Spark LP. Many flyers were distributed to those interested and the large majority were very sympathetic when they heard about the 500 animals that were murdered at Huntingdon Life Sciences every day.

The angry voices and pointing fingers of accusation raised toward Peter’s apartment gave vent to the frustration of knowing that a very, very rich man who claims to love animals continues to hold shares in one of the most notorious animal abusing companies in the world, Huntingdon Life Sciences.

Last protest of the afternoon was held at the popular Sixth Avenue location of Staples Office Supplies. As in the past, several activists distributed hundreds of full color flyers. This protest was primarily silent as there are so many Staples customers that want to talk to activists about the relationship between Staples and Huntingdon Life Sciences, that protesters have found it more effective to engage the public one on one.

Many promised to call Staples headquarters while others went a step further and gave their word that they would not shop at Staples until Staples announced the end of their business relationship with the puppy killers at HLS. At the end of a long day of education and outreach, it is always nice to hear that consumers are willing to show their support for compassion and ethics by choosing to boycott a company that has neither ethics nor compassion.