SOCPA Is Dead And Buried

in westminster magistrates court yesterday, an admission was made by the prosecutors that lent weight to the belief that SOCPA can no longer be used against protestors near parliament
barbara tucker appeared in court yesterday accused of a section 5 offence of causing alarm and distress to mp alan duncan when she harangued him outside parliament on february 26th for voting for the illegal war against iraq and thus conspiring to murder innocent people. (

at the time she was arrested under socpa legislation, along with two others (who weren't even protesting at the time). she was held for more than 20 hours at belgravia police station. because of previous police assaults, she refused to attend the police station on bail, and on the 11th april she was sentenced to two weeks in prison for this offence (


it was suspected that alan duncan was driving this case against police advice, and the charge was transformed into a section 5, although yesterday no arresting officer or charging officer took the stand at westminster court. however, alan duncan turned up, and accused barbara of causing him alarm and distress. she conducted her own defence and cross-examination.

the evidence of various witnesses, including alan duncan himself, was undermined by independent video evidence of the confrontation.

towards the end of the proceedings, the judge closed the case without allowing barbara to sum up, and the case was adjourned for the judge to consider his verdict.

what came out however, was a bombshell for socpa. barbara has been requesting the prosecution case summary for four months prior to this hearing, and only finally received it in court yesterday. hidden amongst pages and pages of print about the incident was the following remarkable statement:

now, no-one we have come across can explain exactly what this means, and there is no knowledge of parliamentary legislative changes to the act, although various consultations and joint committee hearings have and are still scrutinising the legislation. however, many protestors have been convinced that the police have received instruction that they can no longer prosecute under this legislation, and this case summary would seem to lend weight to that theory.

in the absence of any information to the contrary, it would appear that the claim in this case summary is in itself a lie, but one based on operational instructions from high up the authoritative chain (rather than actual legislative changes as claimed).

what it means to would-be protestors is that SOCPA is over, finished, powerless. if you are protesting near parliament and you are threatened with arrest, you can carry on with impunity. you will not be arrested, or if you are, the case will not be proceeded with and you will have grounds for compensation.

so come on down. we once more live in a free state (ish) - ok, i know there are other far more sinister sections in the act, and then there's the coming counter-terrorism act, and there's asbos, and privatisation of public space, and regulatory investigative powers, and id cards, and cctvs, and corporate injunctions, and threats to press freedom, but hey, at least celebrate this one little moment of victory and freedom!

one more anecdotal addition to this story. the other day i was talking with a high-profile socpa criminal, and they told me that they had been in court a few months ago for non-payment of fines relating to a socpa conviction. they told the judge they had absolutely no intention of paying the fines, but the judge would not listen, and chucked them out of court with a warning that they must pay within 28 days. they didn't. since then, over several months, they have heard nothing more. no bailiffs. no court summonses. no demands. nada. is this an oversight, or is it part of the same pattern? we think SOCPA IS DEAD.

come and protest once more - tell your friends - spread the word - let's party!!

photo to follow of this remarkable admission in the case summary

That piece of paper. 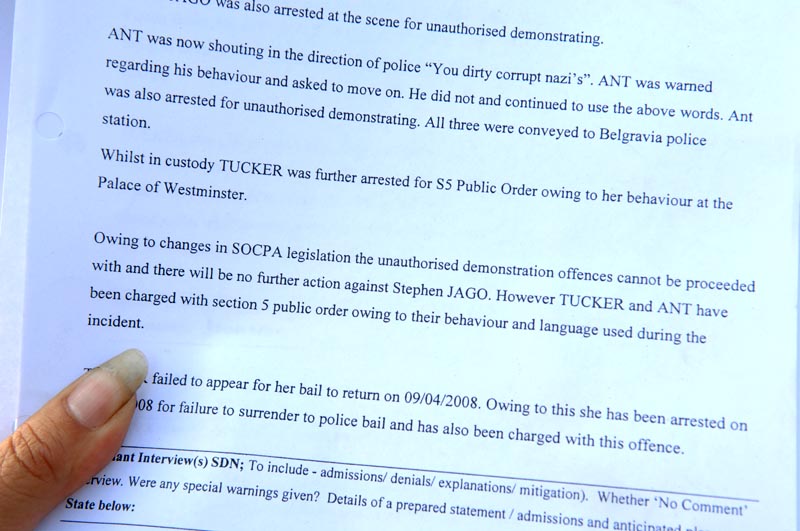 There it is in black and white.

All that time and money. I hope the cops feel as stupid as they look!