Binyam Mohamed turned 30 yesterday in Guantánamo Bay. Held illegally and without conviction for over six years, the British government wouldn't let Binyam come to his party, so we took the party to them! 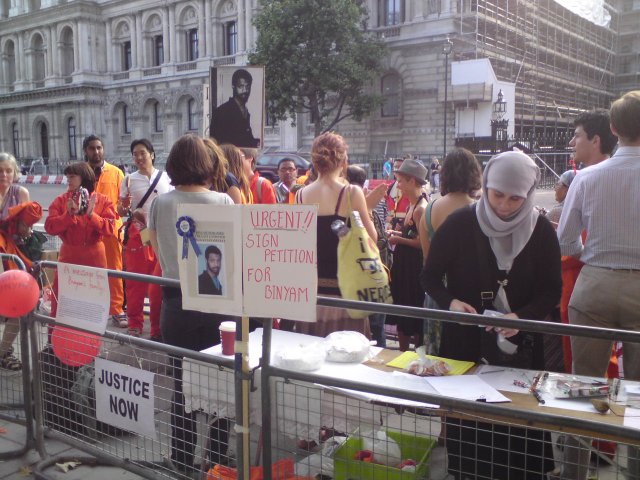 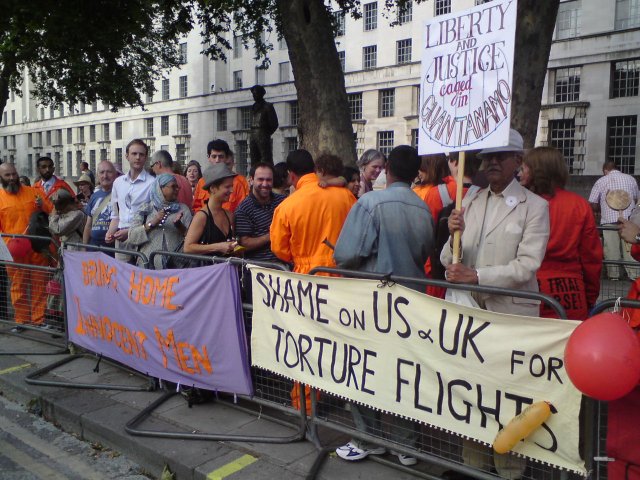 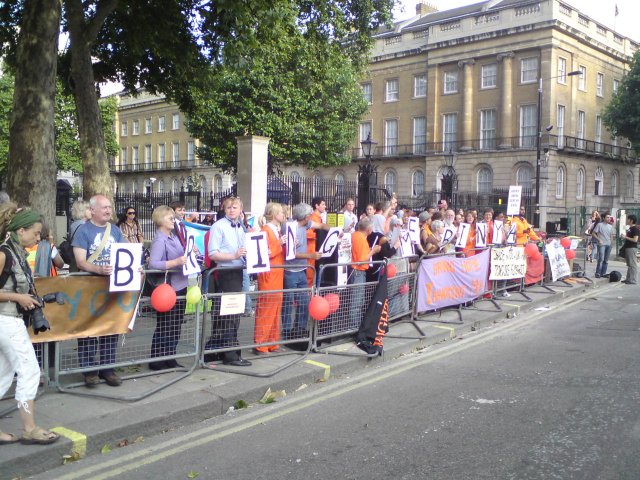 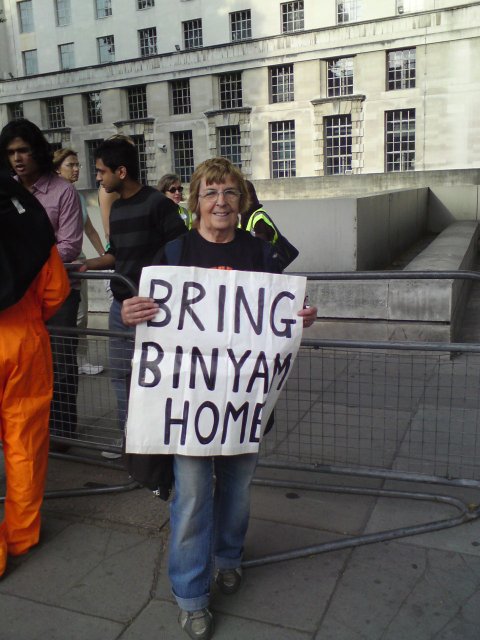 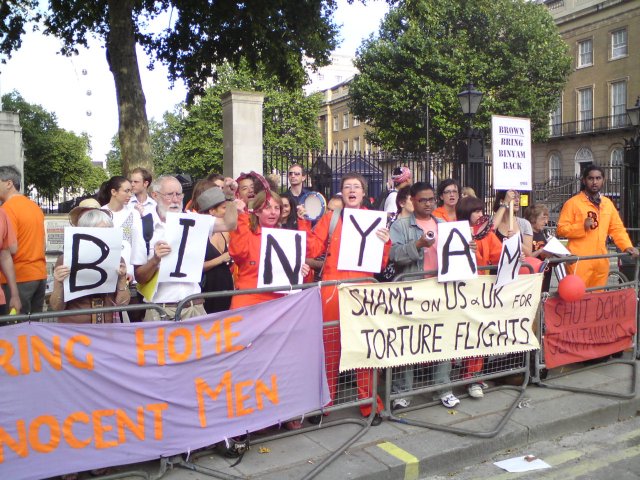 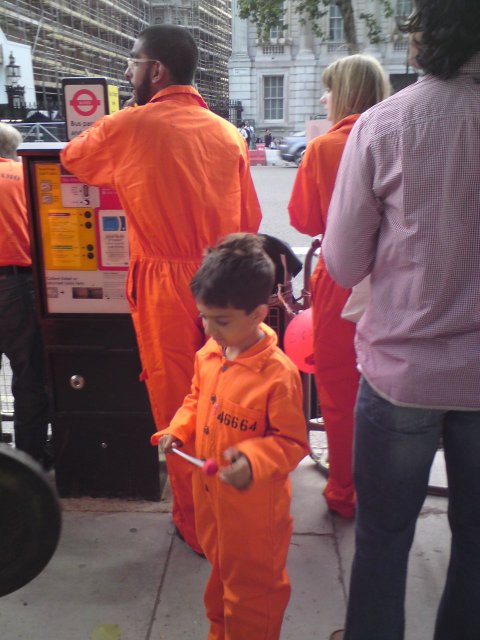 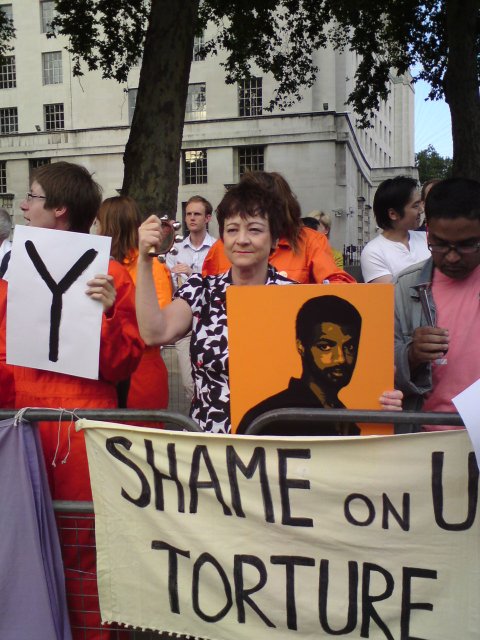 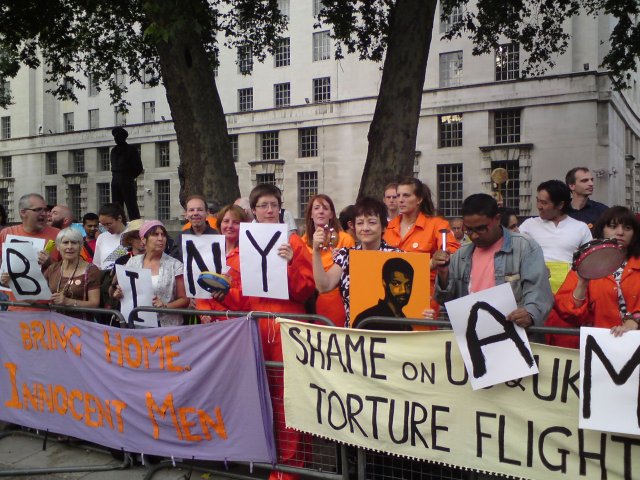 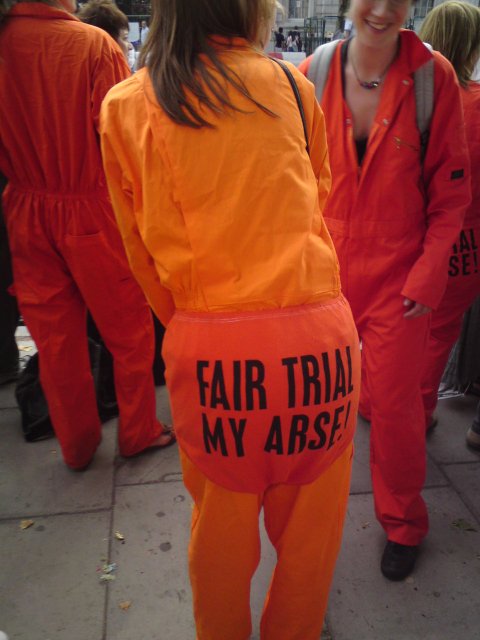 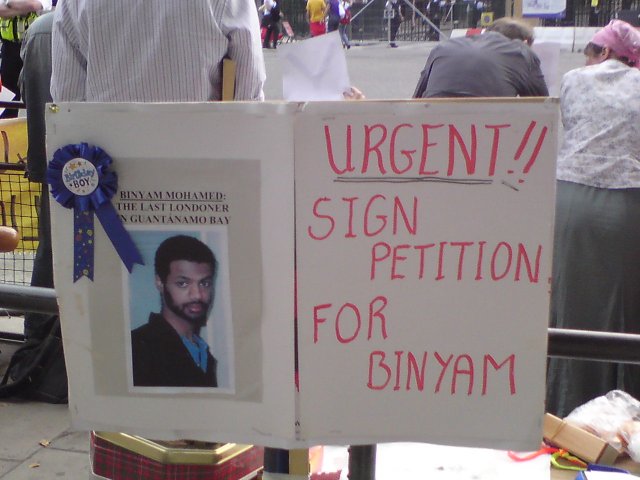 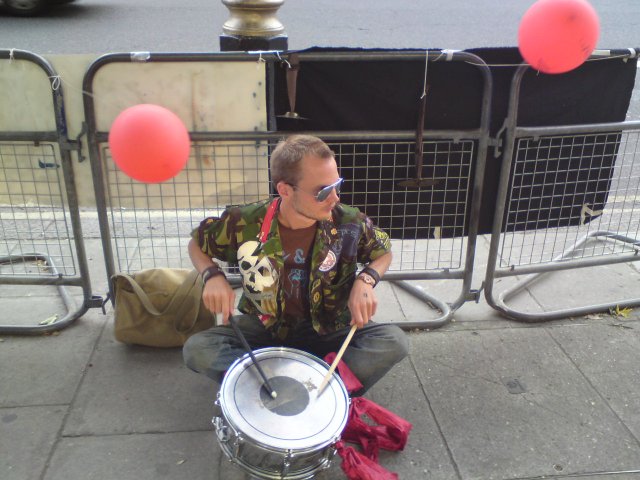 Following the success of its unique and continuous “Six Days for Six Years” vigil outside the US Embassy in London to mark the six years that Binyam Mohamed has spent in illegal detention, the London Guantánamo Campaign then moved its protest to Downing Street yesterday, 24 July, Binyam’s 30th birthday, to hold a unique birthday party demonstration and to put pressure on the British government to act to see Binyam released.

Nearly 100 people joined the action on a warm, sunny evening in central London. A truly national action, there were partygoers/demonstrators from the south coast and the Midlands as well as Londoners. With balloons, cakes and lots of musical instruments, the demonstrators opted for a noisy demo instead and a party atmosphere to show the government that this is how things should be: Binyam should be here celebrating his birthday like anyone else with friends. After six years of illegal detention and the abuse of his human rights, there is not much left to say, thus the London Guantánamo Campaign instead opted for noise and fun, all the while making a very serious point. The British government can and must act to see Binyam released. Having requested his return almost a year ago, the British government does not actually believe him to pose any threat. The partygoers/demonstrators were joined by MEP Baroness Sarah Ludford.

Working in solidarity with his family, the London Guantánamo Campaign was given the following statement by Binyam’s family to mark his birthday and addressed to the PM:
“Dear Sir,
Binyam will turn 30 today. He has been detained for the past six years of his life. He has gone through six years of torture, six years of physical and psychological abuse, six years of physical and psychological deterioration and six years of unlawful imprisonment. Six years is too long Mr Prime Minister. My brother is at the verge of taking his life. My family and I have lost him for past six years. We do want to lose him forever. My brother is an innocent man who has endured torture beyond one's imagination, torture which is only seen in movies. He is being tortured as we speak right now. My brother's imprisonment and inhumane treatment has caused a lot of distress for my family and I. My only wish right now is to touch my brother hug him and talk to him. Please make my wish come true and make this year to be the last for my brother to celebrate his birthday in Guantánamo.”

Petitions and letters to the Prime Minister were also signed and birthday cards were written to Binyam.

Binyam Mohamed was kidnapped in Pakistan in 2002, tortured horrifically as a victim of extraordinary rendition in Morocco for 18 months, where confessions were forced from him of having committed acts preparatory to terrorism and knowing people he had never met before, before being taken to Afghanistan for more torture and on to Guantánamo Bay in September 2004, where he has been held ever since. Binyam was 23 when he was kidnapped. He lived in west London for over seven years and came to the UK from Ethiopia as an asylum seeker in 1994.

Binyam is currently facing a trial by military commission and could potentially face the death penalty; if tried at Guantánamo, he is unlikely to receive a fair trial. The vigil was held to get the American government to reconsider the charges and to drop them. Binyam has been held without trial or conviction for over six years and is thus unlikely to face a fair hearing now. His lawyers also report that he is in a fragile state and has taken to smearing the walls of his cell with his own faeces. He has been on hunger strike for the last 3 months and is suicidal; he wrote in a letter to the Prime Minister in May, “I have been next to committing suicide this past while. That would be one way to end it I suppose”.

The British government has documents in its possession which could see Binyam released. Next week, on Tuesday 29 and Wednesday 30 July, a judicial review is being held at the High Court in The Strand to force the government to hand these documents over to the US government. So far it has refused to do so. The London Guantánamo Campaign and Brighton Against Guantánamo will be holding a demonstration outside the Court from 10.30am. Come and join us if you can.

The London Guantánamo Campaign will also be holding an hour-long vigil outside the US Embassy on Friday 1 August at 6-7pm. Our weekly vigils are now on the first Friday of every month instead; we haven’t gone away and will continue to keep some form of presence outside the US Embassy until Guantánamo and all other “secret” jails used for torture, rendition and under the false blanket of the war on terror are closed.

Georgeous people!,gives everyone with truth in their heart faith in humanity

rock on, for the true evolution of planet earth

The real stars of this past week have been the ladies and gents who spent the night out for six nights on the trot outside the US Embassy, calling for justice and respect for humanity and the rule of law. I'm not sure that anyone has ever done anything like our vigil outside the US Embassy before...could be wrong though.