Students and striking local government workers united to picket a London School of Economics (LSE) event in Starbucks on Kingsway, Holborn last week, in opposition to the university’s and coffee chain’s support for the state of Israel's occupation of Palestine. 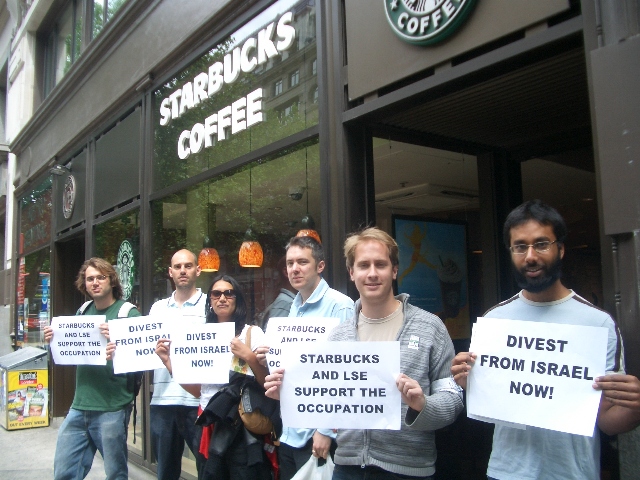 The LSE Annual Fund and Alumni Relations departments had teamed up with Starbucks to offer an "afternoon of free coffee and cake tasting for Postgraduates," in a clear attempt by the global coffee chain to undermine the role of the LSE Students' Union as the primary supplier of refreshments on LSE's campus.

Students have previously expressed outrage at LSE Director Howard Davies' active support of organisations complicit with Israel's occupation of Palestine. Davies, a member of the National Council of the Academic Study Group of the Friends of Israel Education Foundation, has previously refused the School's endorsement of informal links established between LSE academics and Birzeit University in Palestine. The Academic Study Group was founded in 1977 for the "promotion of new collaborations" with Israeli institutions. Israeli human rights groups have accused the institution as being "part and parcel of Israel's colonial system of oppression against the Palestinians."

On 30 May 2007 UCU (University and College Union) passed a resolution at its annual congress calling upon members of the Union "to consider the moral implications of existing and proposed links with Israeli academic institutions,” with a view to boycotting them. The next day LSE's Davies posted a statement on the LSE website condemning the resolution and by implication a free debate on the issue.

Students were also angered by the statement of former LSE Chair, Lord Tony Grabiner, for his remarks in a House of Lords debate on anti-Semitism in which he branded the UCU motion for debate as "poisonous", warning that "we must be vigilant".

Meanwhile, Starkbucks CEO and Chairman Howard Schultz is renowned for actively supporting the Zionist occupation of Palestine. In 1998 he was honoured by the Jerusalem Fund of Aish HaTorah with "The Israel 50th Anniversary Friend of Zion Tribute Award" for his services to the Zionist state in "playing a key role in promoting close alliance between the United States and Israel". The Jerusalem Fund of Aish HaTorah funds Israeli arms fairs and the Zionist propaganda website, honestreporting.com.

Schultz's work as a propagandist for Israel has been praised by the Israeli Foreign Ministry as being key to Israel's long-term PR success. In 2002, whilst the Israeli army was slaughtering Palestinians in Jenin, Nablus and Bethlehem , he made a provocative speech blaming the Palestinians for terrorism, suggesting the intifada was a manifestation of anti- Semitism, and asked people to unite behind Israel. Starbucks still continues to support Zionism by sponsoring fund raisers for Israel.

Outgoing Chair of the LSE Palestine Society and Green Party member, Ziyaad Lunat stated: "LSE should be clear that we will not allow it to actively or passively support the occupation of Palestine, nor collaborate with other organisations renowned for their support of Zionist imperialism. LSE students are becoming more and more aware of the atrocities committed by Israel, and resolutions passed by a majority of students at LSE show that they find Israel's activities repugnant."

UNISON activist, Green Party member and former LSE student, James Caspell stated: "Whilst we are striking over fair pay, students and workers in Britain should unite and show solidarity with our Palestinian comrades at every opportunity, who live in effective open air prisons and are denied of basic material security by the Israeli state.

LSE Students' Union is twinned with An-Najah University in the West Bank, and last year voted to divest from companies operating in Israel or providing the state with arms.