The Open Rescue Team of Igualdad Animal (Animal Equalty) have rescued four mink from a fur farm in northern Spain. This is the second open rescue by Igualdad Animal (in August 2007, six baby pigs were rescued from an intensive farm). 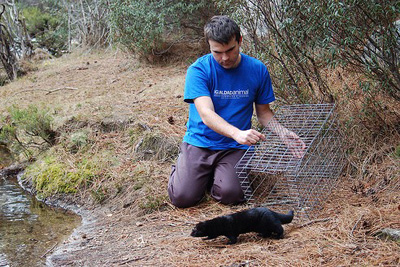 The Open Rescue Team of Igualdad Animal (Animal Equalty) have rescued four mink from a fur farm in northern Spain. This is the second open rescue by Igualdad Animal (in August 2007, six baby pigs were rescued from an intensive farm).

Excerpt from rescue report (translation from

"Although legally non-human animals, including mink, are considered property and therefore to remove them from cages is considered 'theft,' a criminal act, at Igualdad Animal we believe that no individual is the property of another and the moment has arrived to liberate our slaves. Just as in the past when some humans were considered property of others and this was an unjust situation, currently we are still involved with slavery. Animals are not property and to liberate them is not robbery but a legitimate act of justice.

With these open rescues we not only intend to rescue a few animals that were going to suffer and die, but we want to provoke a social debate that causes us to rethink the exploitation to which we subject the animals with whom we share the planet, and to bring about a change of mentality and habits of consumption in each one of us, because ultimately we are the ones who-- with our daily decisions of how we dress ourselves, feed ourselves, or entertain ourselves-- can put an end to the daily suffering and death of animals.

We also want to remember all of the victims who still remain in cages, to show our support for all those who rescue caged animals, and finally to dedicate this action to the Austrian prisoners Martin, Christian, Christof, Elmar, Felix, Jan, Jürgen, Kevin, Leo and Sabine, who at this moment are victims of an unjust judicial system."

In August 2007, six baby pigs were rescued from an intensive farm, see

In late July, activists entered the fur farm and documented conditions inside. Four mink were carefully removed from cages and later released into a natural environment many miles away.