The Daily Star On Antifa 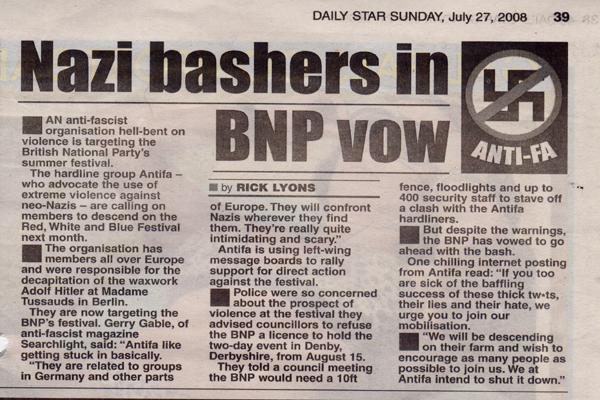 The hardline group Antifa - who advocate the use of extreme violence against neo-Nazi's - are calling on members to descend on the Red, White and Blue Festival next month.

The organisation has members all over Europe and were responsible for the decapitation of the waxwork Adolf Hitler in Berlin.

They are now targeting the BNP's festival. Gerry Gable, of anti-fascist magazine Searchlight said: "Antifa like getting stuck in basically.

"They are related to groups in Germany and other parts of Europe. They will confront Nazis wherever they find them. They're really quite intimidating and scary."

Antifa is using left-wing message boards to rally support for direct action against the festival.

Police were so concerned about the prospect of violence at the festival they advised councillors to refuse the BNP a license to hold the two-day event in Denby, Derbyshire, from August 15.

They told a council meeting the BNP would need a 10ft fence, floodlights and up to 400 security staff to stave off clash with the Antifa hardliners.

But despite warnings, the BNP has vowed to go ahead with the bash.

One chilling internet posting from Antifa read: "If you too are sick of the baffling success of these thick tw*ts, their lies and their hate, we urge you to join our mobilisation.

"We will be descending on their farm and wish to encourage as many people as possible to join us. We at Antifa intend to shut it down."