On Wednesday morning the Wembley Sports Ground occupiers and local businesses saw off council workers, who came to evict the local businesses as part of a simplistic divide-and-conquer manuever, but were forced to back off and postpone the eviction 'til Friday. 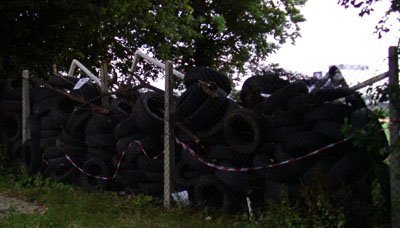 Last Saturday, the 26th, saw a new group occupy the Wembley Sports Ground. The group, called GRASS (Grass-Roots Alliance for Social Spaces), claims that the construction of a new Academy on the grounds will close them off from the local community and exclude many children and young people from using it. With dwindling community resources due to funding cuts across the nation (to help pay for the Olympics), and reports of rising youth crime and violence all over London, the group says that excluding even more young people from safe social spaces could drive them to the streets, and towards violent gang crime.

On Monday, construction workers and land surveyors attempted to enter the site, and found themselves faced with locals and campers, as well as a large tire barricade. The locals chatted to the workers and informed them of what was going on, while the campers buckled down in front of the gate. The workers left and everyone had a nice drink in the sun.

After this, the council decided to try out the usual tactics of authority everywhere, and informed the businesses on the site (four in all: the football ground, a kids' nursery, a motorbike driving school and a carwash) that they must leave by Wednesday 9am. Anyone could see this as an attempt to turn businesses against community, and the plan backfired as the businesses held a meeting and decided to resist, along with the camp occupiers. On Wednesday morning a council worker, along with a legal aide, arrived on site and informed the businesses that their eviction has been postponed until Friday morning.

Brent Council is in deep trouble, as they have already promised several parents that their children have places in the unbuilt school, which is due to open at the beginning of the school year in September. With less than five weeks to go, it has become abundantly clear that the privately-owned and run academy (funded by ARK, a children's "charity" managed by several rich businessmen, including Arpad Busson) will not be built in time. Sources say that the plan is for several portacabins to be laid out to start with, while the school itself will be built around the students during the school year.

Meanwhile, the campaign by locals to keep their sportsground open and free of privatised education has been going for the past two years, as consultations with the community have resulted in open mass opposition to the idea. The council, however, has steamrollered over the opinions of local people and went ahead with the plan.

Tomorrow is Friday, and there are reports of several countermeasures being contructed to stop the bailiffs from evicting the campground and businesses. If you are interested in coming along to help, there are plenty of tents and sleeping bags, and you will be made welcome. The sports ground is on Forty Avenue, Wembley Park Station being the nearest tube. For information and directions, please call 07533192116.