Yesterday evening over 100 police officers ransacked the Camp for Climate Action site. Items essential to the health and safety of the camp were removed, including pipes for the delivery of fresh water. Two people were arrested and three pepper sprayed while resisting the raid. 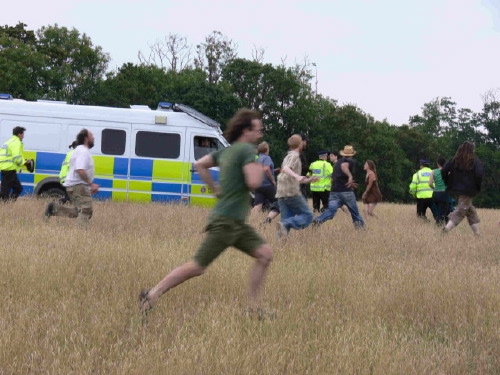 police vans drive on to site 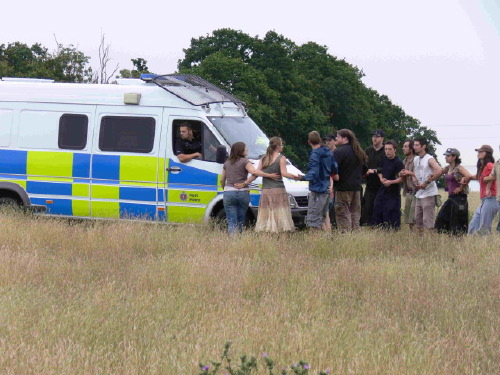 people form a human chain to try and stop them 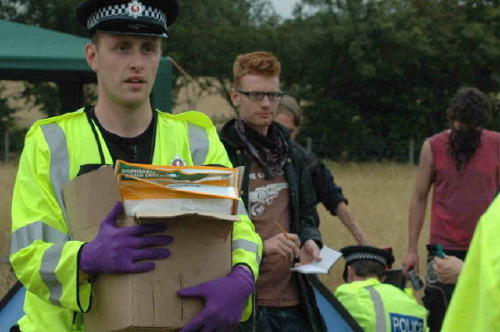 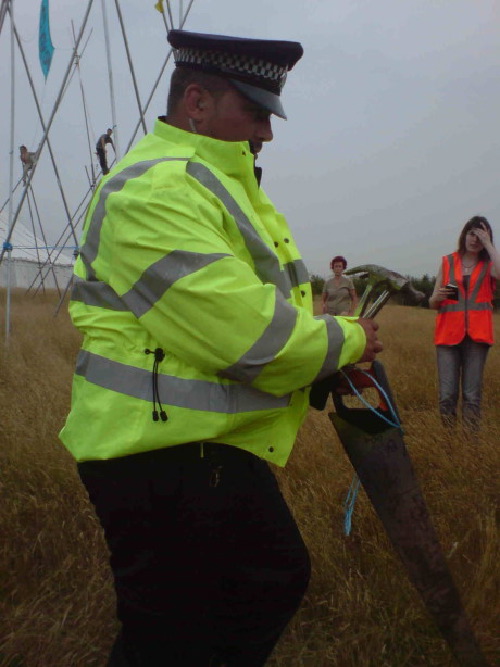 this plumbing is obviously a threat to public safety 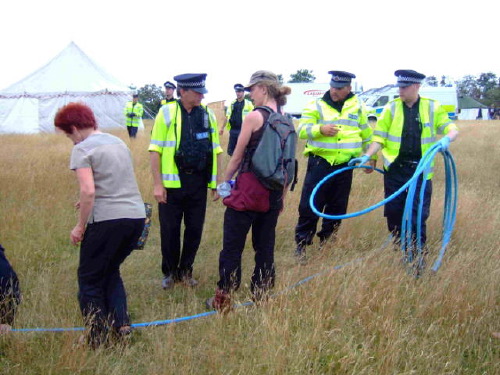 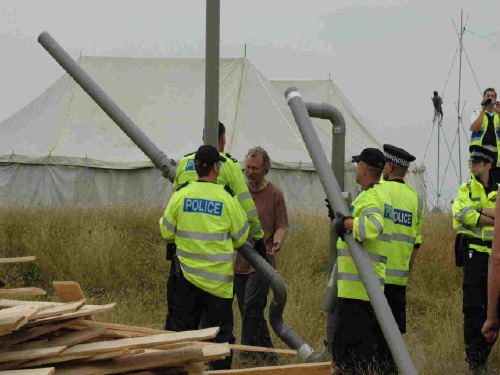 campers try to negotiate with police in vain 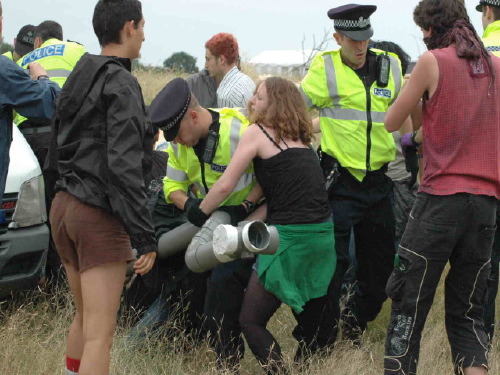 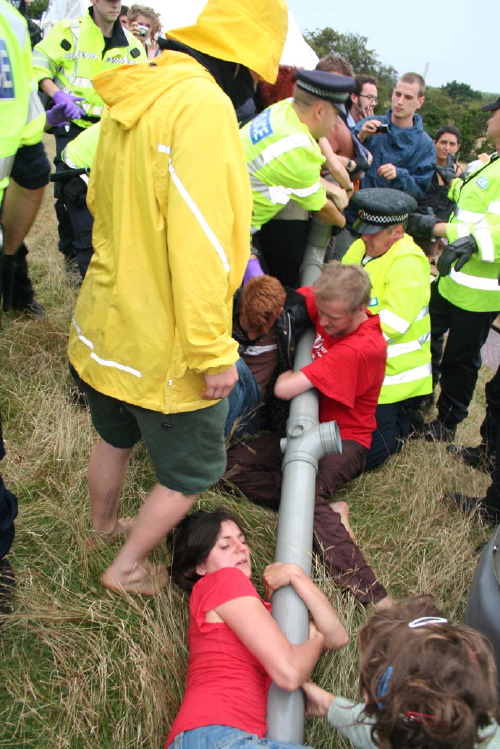 tug of war over esential plumbing 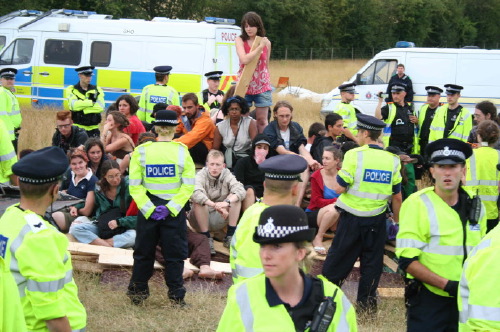 you are SO not taking our wood 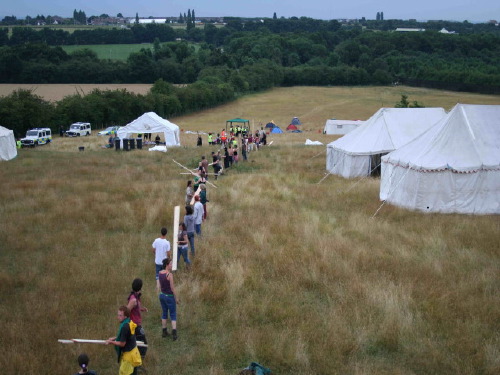 wood is safely returned to the kitchen after the woodpile occupation

Activists dove under police vans and formed human chains to prevent them from getting on site, and people scrambled up the double tripods â€“ but campers were outnumbered 3 to 1 by the police.

Although police claimed to be searching for materials that could be used on the 9th August day of action, they also seized items such as guy-ropes for safely securing marquees, radios used in medical emergencies, and building materials essential for the construction of compost toilets. The seizures went as far as the confiscation of such ridiculous items as a bicycle repair kit, three board games and a pack of children's crayons.

But the real stand off took place over water pipes and wood for the kitchens. In a twist of supreme irony, as the council dug a pipeline to deliver fresh water, activists had to engage in a tug of war with the police to keep the water pipes on site â€“ which they did successfully. And as the police brought in a flat-bed lorry to remove wood for the kitchens, activists climbed onto the woodpile and prevented it from being taken away.

As the police gave in and the lorry drove away, a cheer went up and campers immediately formed a human chain to carry the wood up to the kitchens. Unfortunately, there is for the time being a small police presence on site.

Everything is now calm on site, but the raid has put the set-up back by half a day, so more people on site are needed to get the camp ready for this Sunday. The big push will be happening over Friday and Saturday as the majority of materials arrive, and there's plenty of work to be done â€“ so come on down!

People should start getting down there now!

People should start getting down there right now! The police need to be stopped from terrorising the camp!

needs support but lets keep the bigger picture in mind

Yes, the camp needs more people to support it and protect it from the police trying to pull this sort of crap, but lets also remember to keep this about the real issues.. climate change, new coal and the inability of a growth model to deal with the huge environmental challenges we are facing.

The police and E.ON have every motivation to provoke us into reacting badly to this, and distract attention away from what we are really trying to do down here.

We are all going to need to keep our heads cool and clear in this next week!

the beeb claims E.On is destorying the old power plant and replacing it with a 20% cleaner one? wtf are u doing there? what about the 1.5 million homes in the South East? are you going to provide them with peddle generators once you sabbed the power plant? Which power station will take the weight of the power shortage? Sizewell?

Tell the truth now, did the beeb really claim the new plant was 20% cleaner? No, they said that E.On claim it will be 20% cleaner.

Besides, that 20% is misleading because it doesn't account for the fact that a new station will be there for decades after this current station would have been scheduled to close. So while we might get a 20% saving on emissions for a few years, the net result would still be more emissions than if alternative power sources were used to replace the generating capacity lost when the current station closes.

Any time someone tries to boil down a complex system such as the power/emission relationship to one single number, they are lying to you about something - at the very least they are not competent enough to be giving advice.


"Which power station will take the weight of the power shortage?"

Err, we have this little thing called the national grid. It allows power stations all up and down the country to distribute power where it's needed. There isn't a big switchboard in Oxford where they change over to a different power station and they don't have to power all 1.5m houses from the same generator.

...how ridiculous is that. But just another example of OTT police behaviour at political protest.

We need shots that clearly show police numbers, or that are accompanied by a note of the coppers numbers. This will help us to log and monitor FIT activity at the camp.

Many claim to be bemused by the simplest of algebriac equations, then, as with oi yoi, hurl statistics around hoping they make an impression somewhere. This is Indymedia so of course they do impress.
What is needed here is not the reuslts of someone else's calculations but your own workings from raw data complete with where each figure was obtained, when and by whom. Then clearly show your workings, let us know how you account for varations in sampling errors/techniques and, considering this is weather based, tempreature, humidity, wind speed and direction.
If you aren't going to give that information then do explain precisely what 'cleaner' means - will the floors be 20% cleaner? the building fabric? or maybe the exhaust?
In principle I have no objections to fossil fueled power stations with the proviso that the power station can be run from a sustainable source around it (to save transport) and there is zero pollution from it. It is possible.

This claim, and claims like it, give me ulcers.

20% cleaner, without context, is meaningless.

Firsly, will the demolition and construction of the new plant be 100% clean? No. Will the pollution and asociated crap from the demolition and construction be in the "20% cleaner" figures? Highly unlikely. What is more likely is that if you factor these in you will end up with something that is either only marginally cleaner or not cleaner at all.

Secondly, does the 20% cleaner figure include the mining, processing and transportation of the cloal? If not then the 20% figure is likely to be massively over the real figure, unless the plant is, in itself, a lot more than 20% cleaner (likely? No).

Thirdly, what do they mean by cleaner? Are they refering simply to CO2? Are they including the other nasty stuff which comes out of burning coal? Does it even mean anything?

Finally, does it include the full life of the plant, or just the projected figures when the plant is new? As things get older they invariably start to break down and get more polluting.