Since early in the morning on 1st August, 20 participants of this year's Camp for Climate Action and members of Action Against Agrofuels successfully blockaded the only access gate to Cargill's European regional head office in Cobham, Surrey. 8 activists locked on to the gates closing the site down completely. Agrobusiness giant Cargill are being targeted by the protesters for their role in rainforest destruction and land-grabbing as well as for profiteering from the food crisis.

Hannah Ritchie from the group says: "Cargill is using the boom in agrofuels to expand soya, palm oil and sugar plantations, displacing communities, food crops and destroying ecosystems. Destroying rainforests and other biodiverse ecosystems, including healthy soils, is one of the quickest ways of heating the planet. This is why we are blockading the Cargill office two days before the official start of the Climate Camp at Kingsnorth." 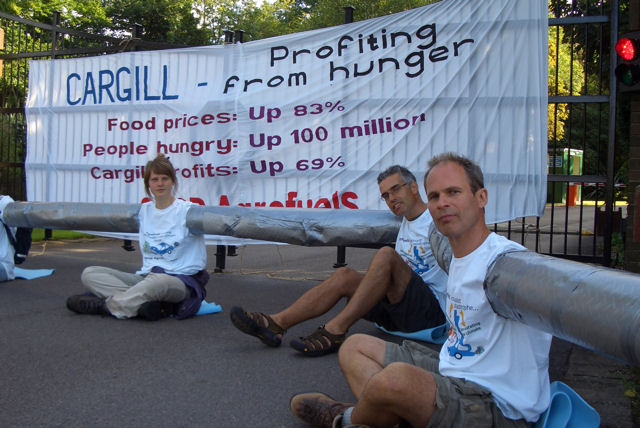 According to the UN World Food Programme, 100 million more people are going hungry as food prices have risen by 83% in three years. At the same time, Cargill's profits have risen to record levels, going up by 86% in just nine months, since the company is profiteering from high food prices.

Jordan Craig says: "For companies like Cargill, agrofuels are an opportunity to make more profits from food, to take over more land from small farmers and communities and to further destroy local food production. This is why we need an immediate halt to government policies such as the mandatory blending of petrol and diesel with biofuels in the UK, as well as an end to 'free trade' food and agricultural policies which solely boost the power and the profits of agribusinesses like Cargill. Instead of agrofuels, we need to have policies that support Food Sovereignty, i.e. which put people's right to food first and support small-scale, biodiverse, organic farming, instead of energy-intensive agriculture."

Letter Presented to Cargill from Indigenous and Community Leaders

Letter from the Indigenous peoples of the Cerrado (Brazilian Savannah) - We, the indigenous populations of the Cerrado, together with other Indigenous peoples as well as traditional communities (Quilombolas, Geraizeiros, Quebradeiras de coco, Ribeirinhos), small farmers and landless people, wish through this document to denounce and alert the world of the destruction of our habitat, homes, lands, rivers, animals, and plants.

The Brazilian Cerrado is the second largest geographical biome (2020 million hectares) and covers a great part of the Planalto Central, as well as the smaller biomes of Mato Grosso, Mato Grosso do Sul, Rondonia, Goias, Tocantins, Maranhao, Piaui, Bahia, Minas Gerais, Sao Paulo e DF. Less than 20% of Cerrado’s original vegetation remains. Because the Cerrado is part of the geographical landscape of these vast areas, it is also linked to the ecosystems of the Amazon, Mata Atlantica, Caatinga, e Pantanal. In addition, the Cerrado is the cradle of the headwaters of the major rivers of South America.

In spite of the immense cultural diversity of the Cerrado, and the fact that we hold 5% of all the biodiversity of the planet, this biome is in constant threat. Every year vast areas of the Cerrado are destroyed to be used for cattle ranching, monoculture production of eucalyptus, sugar cane, palm oil, and primarily soy. In addition, the Cerrado is threatened by major infrastructure projects including dams, roads, and waterways to transport agro-industrial products. Cargill is benefiting from development policies created in the 1980s, and ratified by our present government, that are focused exclusively on agricultural and cattle industries, without regard or respect for the peoples of the Cerrado. A great number of Cargill silos are located near various Indigenous territories of the Cerrado and by not complying with Brazilian environmental laws they are causing grave social, cultural, environmental and health impacts for our peoples. The excess use of agrotoxins on the crops pollute the headwaters of our rivers that drain into our Indigenous lands and consequently contaminate our fish stock. In addition to these actors there is erosion and contamination of soils, drying up of rivers, extinction of animals for hunting and medicinal plants. These facts strongly compromise the physical and cultural survival of our peoples and our way of life. According to a report in the Folha do Sao Paulo (October 26, 2003), Mato Grosso has the highest level of deforestation, "88% of Mato Grosso’s exports are tied to soy production. Of the 28 million hectares of deforested land in Mato Grosso, 5 million are used for agriculture, and of these, 4 million are used for growing soy."

According to studies done by Conservation International (Sao Paulo 2004), "By the year 2030 the Brazilian Cerrado will disappear if the current annual rate of deforestation continues. Of the 204 million original hectares, 57% have already been completely destroyed. The Cerrado loses 2.6 soccer fields per minute of its native vegetation." For these reasons, we demand that the grain producing companies, especially those who are affecting our way of life, immediately suspend expansion into new areas of the Cerrado, and stop the cultivation of soy around our lands, our headwaters, and near the homes of our Indigenous populations: CARGILL, STOP NOW WITH THE DESTRUCTION OF OUR LANDS!!!

Letter from Sovereignty and Life Organization of Paraguay - The campesinos and Indigenous people of Paraguay passionately reject the production system that is being implemented by Cargill in our country. This system that is being implemented by Cargill is affecting us negatively. The intensive and extensive production of soy is poisoning us and leaving us with fewer natural resources to survive as a people. Because of all the negative impacts that soy represents, we do not consider it a viable crop to cultivate in our country. Soy contributes to deforestation, loss of soil fertility due to erosion, contamination of rivers, streams and the water table, and sedimentation. As a result of the introduction of soy, we campesinos are being violently expelled from our lands. Every time we protest against soy we are violently repressed by the national police. We are blacklisted and treated like criminals. We also reject the mega-port that Cargill is constructing in Asuncion, the capital of the country. This port is located just 500 meters upstream from the water intake of ESSAP the public services company that provides drinking water to 1,500,000 people in Asunción. This port threatens to contaminate all the water for the city of Asunción. The people of Asuncion and we--the campesinos--are already mobilizing against this project.

After the sprayings and fumigations of the soy, we invite you to come with your children, for at least a couple of minutes, to share this air that we breathe. We are sure that you will not like this. And, you will surely never return there again. It is very tortuous to constantly smell the odor of pesticides. We passionately reject the presence of Cargill in our country because they are in no way contributing to improving the quality of life of our people. We demand that you leave our country.

Letter from Lynette Hambuga from Papua New Guinea - I am the president of the Sorovi Women’s Association, a community based organization based in Oro Province, Papua New Guinea (PNG). I have lived most of my life time under the oil palm with the communities. My home is about a five minute walk from the village oil palm blocks (VOP). I represent the whole interest of the Oro Province and oil palm communities in Oro and Papua New Guinea as well as other oil palm communities in other countries like Indonesia and Malaysia. Among other issues, my main concern is the empty promises that the company has done with the landowners in my own area. The company has promised the following:

The promises were made only to lure the landowners to convert their land for oil palm farming. Up till today the communities are still waiting to see these promises. The company never fulfilled the above promises. I am purposely here to tell the real truth on behalf of my people of Oro and palm oil communities around the world. People are suffering because of poor road conditions, no easy access to schools, and lack of health centers. Environmental and socio-economic issues are long term concerns that have been felt by the people of Oro for a very long time now, yet nothing or very little has been done to address these issues and people are still begging for help. The following are issues we would like the company to consider very seriously:

• Water pollution because of inadequate treatment systems for palm oil waste management, excessive application of chemicals and fertilizers, and sewage disposal in the rivers
• Compliance to government regulations, including the Oil Palm Processing Code of Conduct
• Deforestation in order to expand palm oil plantations
• Unfair pricing for growers
• Housing conditions for labourers and wages

In Oro, I feel that the companies have made enough profit off of our land, and that they should return the land to the land owners. This includes not deforesting any more land for palm oil. The above are some of the many other problems in the oil palm communities in PNG as a whole. The main issue we all need to understand is that, people are suffering and badly need help. Cargill is proposing a new mill at Kokoda, Oro Province, PNG, and the local landowners have united against it. Despite of their protest, the mill continues to be built. We have attached a petition from landowners in Kododa and Ioma against the mill. I have also attached the minutes from a meeting that Cargill held with mini-estate owners in Kararata Village, Oro Province, PNG. They are voicing concerns about Cargill’s empty promises.