On Friday, July 18, animal rights advocates celebrated the decision by Raymond James to dump their HLS stock by protesting at the offices of Merck, Sanofi-Aventis, and Novartis, all of which have yet to follow Raymond James's sensible lead. What began as a normal day for the greedy opportunists at Merck, Novartis, and Sanofi Aventis turned into one that they would hope to forget. Compassionate individuals descended upon their offices, protesting their continued use of the animal abusers at Huntingdon Life Sciences. With signs and bullhorns, activists took to the streets. 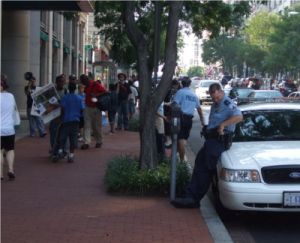 As expected, we received a great deal of support from pedestrians; one voiced her disgust through our megaphone and local youths participated in all three demonstrations. Horrified by the heinous images, they too grabbed signs and leaflets, helping to educate the public about the sick, twisted minds watching us from their high-rise windows. Novartis thought they could intimidate us by calling the police, but they seem to forget that we have something called the First Amendment. We are not easily threatened and will continue to confront the scumbags that seek to profit from the torture of our animal friends.

There's just something so offensive about what happens at places like HLS that it seems to inspire people to come out of nowhere to protest their puppy-killing outrages.

Huntingdon "Life" Sciences kills an estimated 500 animals a day testing products like bleach and Splenda. Some pharmaceutical testing takes place there too-at the expense of human test volunteers who get the drugs that pass through HLS's sloppy and falsified testing.

At Novartis (where an illegal, no-warrant arrest based on security guard like occurred at the last visit), three cop cars and two biker cops showed up. They made no overtly aggressive moves but stationed themselves in positions meant to intimidate. It did NOT work, the protest continued, and the cops thought things were over when the Novartis action ended and signs were put away. Things were NOT over as the signs came back out at Sanofi-Aventis, where the cops never showed up.