Tuesday 29th July: Today SHAC South were out once again naming and shaming Suppliers and Customers of Huntingdon Life Science. 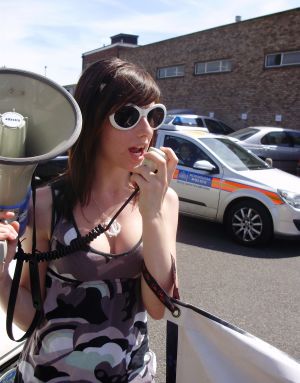 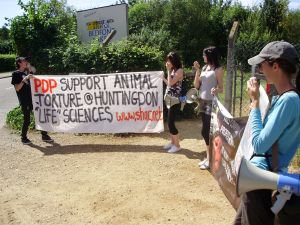 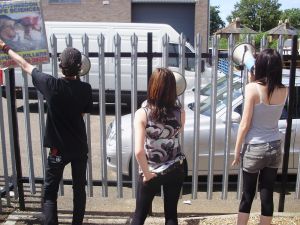 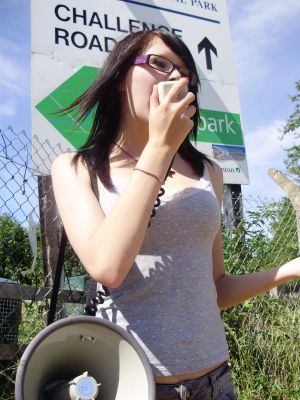 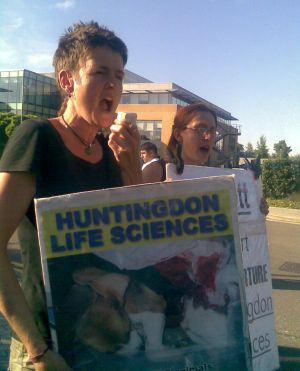 We started off with a Lunchtime demo at Monnock Freight. This sick company are one of the only companies left who will happily transport live animals for HLS, in particular, picking up primates from airports on HLS's behalf. We spent well over an hour at this demo point, and after sorting out the police, who clearly had no idea how to police a peaceful demonstration, we proceeded to chant and tell all their neighbors what sort of people HLS were and what their involvement with Monnock is. This was met with great acceptance and support.

Our next stop was a quick pop in to PDP, another freight company for HLS. This company have paid thousands of pounds for an injunction to keep us silences, but with four megaphones and a car full of committed and vocal activists, it is safe to say they failed. The site wasn't too busy, but the people who did pass by were yet again very supportive and their looks of shock as they learnt of HLS employing drunks, drug addicts and registered sex offenders to test on animals were clear indications of their disgust at what sorts of sick people PDP and HLS really are.

Our final stop today was an hour and a half demo outside Abbott Labs and Wyeth. These two customers of HLS are convenient placed opposite each other and with no injunctions or restrictions, the impact of a demo there is incredible. We were joined by local activists who helped keep up our chants of 'Blood on your hands' and 'Shame on you' whilst everyone entering and leaving the two buildings was informed of the horrific acts of animal cruelty that both companies fund inside Huntingdon. Abbott and Wyeth were clearly embarrassed by the demonstrations as security and taxis rushed everyone away from work as quickly as is possible.

The Demonstrations don't stop until the slaughter of innocent animals does. Our numbers are getting stronger, our voices are getting louder and our hearts are more determined now more than ever before.