On Saturday 2nd August, campaigners in the High Peak staged a demonstration to call for the re-opening of the Woodhead Tunnel and the Manchester to Sheffield rail line.

The demo co-incided with the Climate Camp at Kingsnorth, Kent. The tunnel is under threat due to National Grid's plans to run cables through it, transferring power generated in the coal fields of Yorkshire to the industrial centres of the North West. 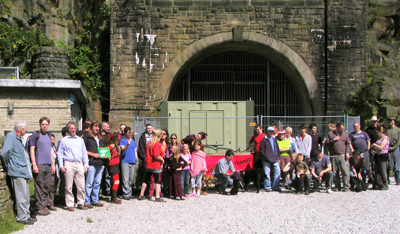 Save the Woodhead Tunnel

On Saturday 2nd August over 50 people from both sides of the Peaks gathered at a demonstration to demand the Woodhead Tunnel re-open to rail. Some attending the protest had hiked for more than two hours over the route of the Woodhead Line, whilst others had cycled from Hadfield and one man had come all the way from Southampton. The crowd, gathered at the tunnel entrance, heard from speakers and enjoyed music from a bicycle-towed sound system in the August sunshine.

The Tunnel has been closed to trains for over twenty years but local people believe there is now an excellent case to re-open the route between Sheffield and Manchester in order to meet national climate change commitments, relieve congestion on local roads and boost the local economy.

A local campaigner from Save the Woodhead Tunnel, believes the ball is now in the Government's court:

"Everyone now sees the common sense case in re-opening the Woodhead line: local MPs, businesses and unions, the Northern Way and now the local community have demonstrated their support. It's up to Ruth Kelly and the Department of Transport to pull their fingers out and include Woodhead in the forthcoming Transport White Paper."

Representatives from Save the Woodhead Tunnel are due to meet Rail Minister Rosie Winterton in October. If people want to get involved in the campaign they can visit their website at www.savethewoodheadtunnel.blogspot.com or attend the next meeting at the Prince of Wales pub, Glossop, 7.30pm Thursday 14th August.

Save the Woodhead Tunnel