"Police on site, get up London, move it now!" was today's 5.15 alarm call. Clothes still wet from last night's downpour, London neighbourhood, now a couple of hundred strong was up and running for the top gate. 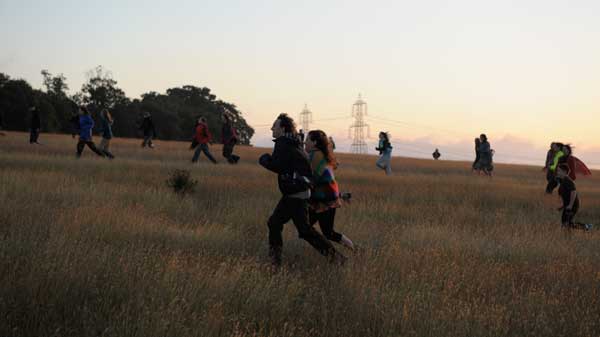 Dawn dash for the gate 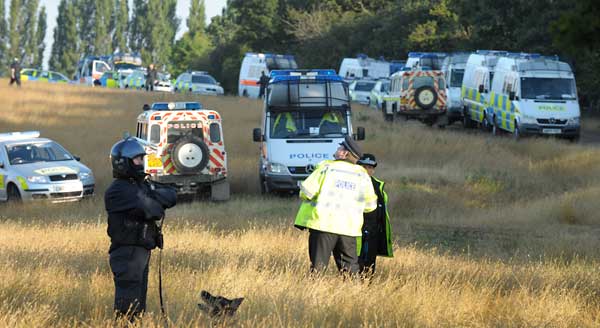 Vans pulling up all the time 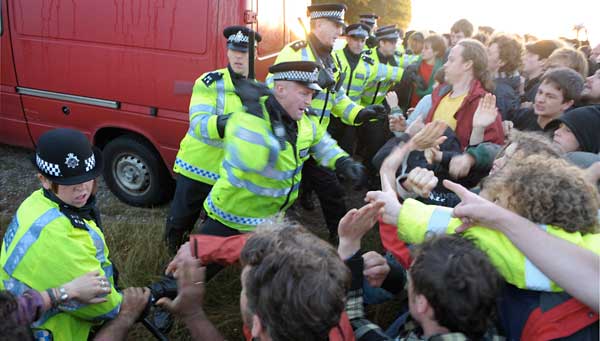 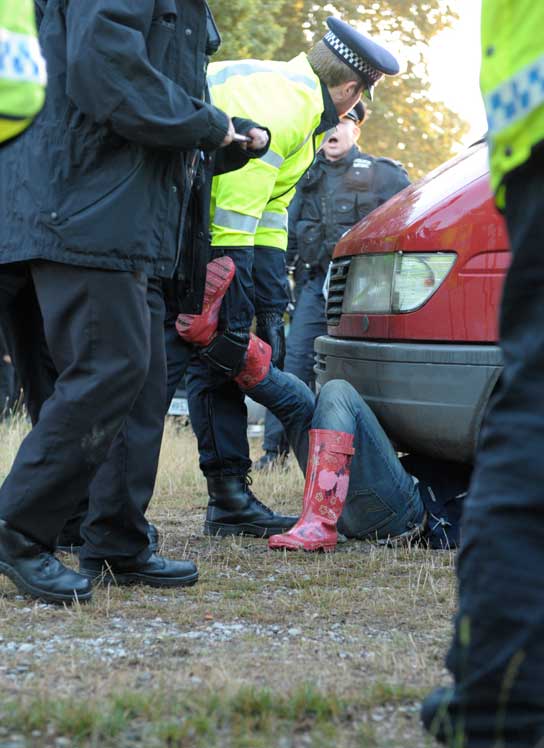 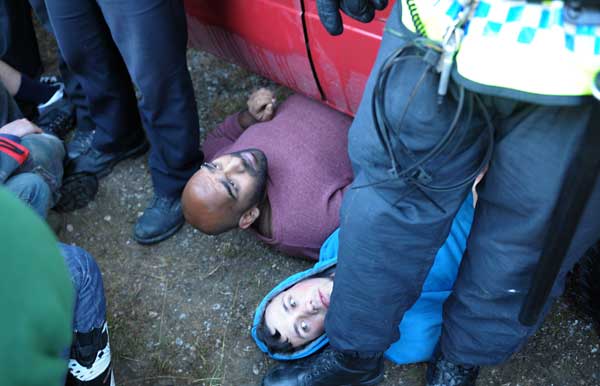 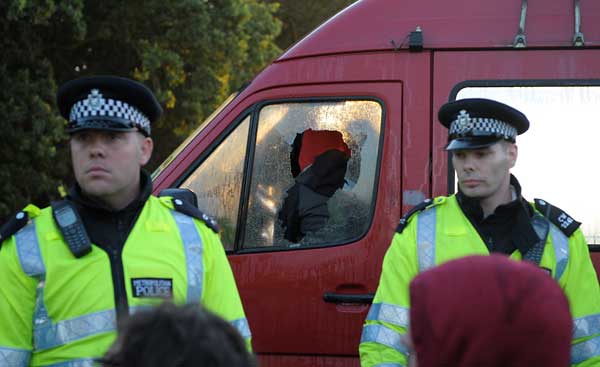 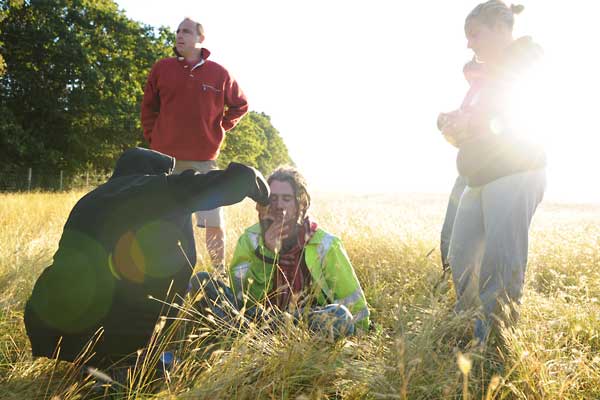 Medics attend to a victim of police violence

Emergency meeting to decide on response 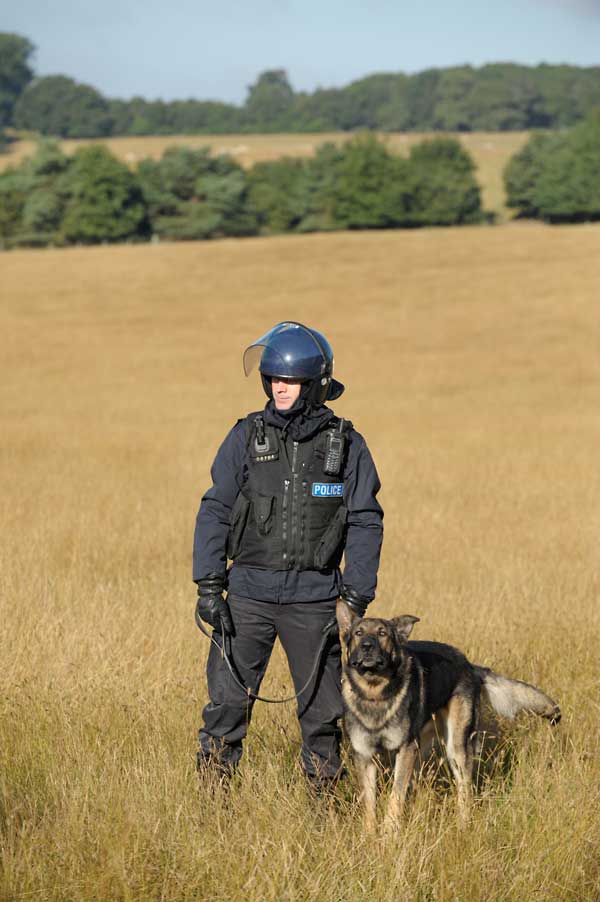 Dogs in the field 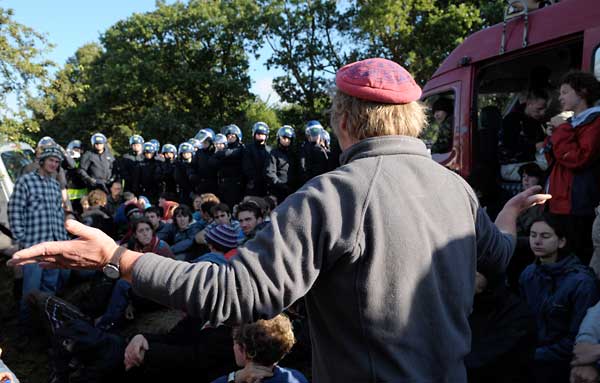 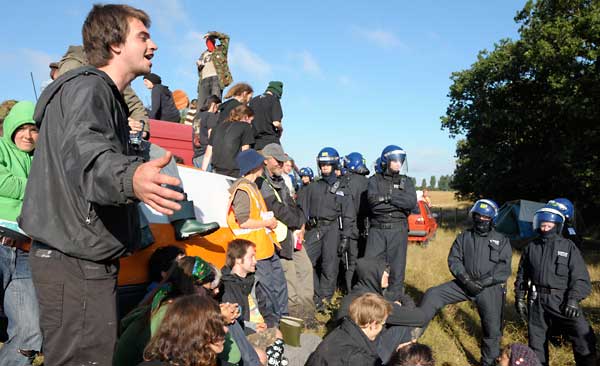 Following Thursday's raid, when police entered the site with vehicles, searched all the tents and removed vital building materials, the top gate had been blocked by several camp vans. A helicopter had flown overhead yesterday demanding they be moved (for why, they're in a field?) but with the wind and the rotor noise nobody could really understand what they were saying.

By the time camp was mobilised London's food wagon had already been towed away, but a red van - which had already had the windows smashed by police to gain entry was occupied and mounted. Three people lay under the wheels preventing its removal whilst campers pushed back the police lines. Police thrashed out with batons, several were injured and six arrested, three of them temporarily.

After an hour long stand off the muppet cops were replaced by riot cops and a waiting game began. The field to our left included their dog unit. Every so often they'd bring in a new squad and campers would react to defend a new flank.

But in the quiet moments, people started to speak about why they were in that field. Have you got kids, they asked the police? You must know why we're here - even the Sun explains climate change to its readers.

Some from Hull told stories of being flooded out last year. That's Climate Change they said.

Kingsnorth - the reason we're here, explained a second - has budgets for a flood wall, anticipating the rising seas we'll Kent will experience as a result of this stupidity.

A third man, lame in one leg was here because of his new grandchild. He was frightened he said, when the police started hitting out, but not as frightened as he would be if we didn't do something about climate change. Standing here in a field, shortly after dawn, facing hundreds of cops, he felt finally empowered.

And the police themselves. As one particularly emotive speaker pointed out, they were making eye contact, they were not unmoved by the message, not immune - they and their families - to an impending disaster.

Dozens of people told a similar story after their searches yesterday. We just doing our job, they said in the golf club car park.

But actually, to be honest, most of support what you're doing. Well done the lot of you.