Occupation of ARK by Wembley teachers in pictures.

On Friday teachers from Wembley who are militantly opposed to their local sports ground being turned into a Thatcher inspired nightmare called ‘City Academy’ occupied the offices of ARK the company who will immediately benefit from this appalling decision.

Shit that’s a long sentence, my English teacher would be disgusted…. anyway the teachers in question are just a little bit tired of not having their calls returned. So decided to make their representations in person.

Details and further hilarity below: 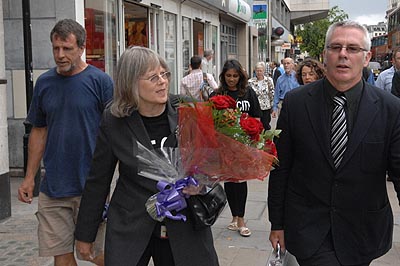 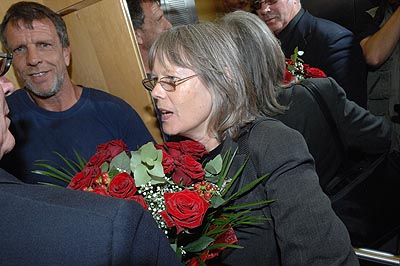 In the lift heading towards ARK. 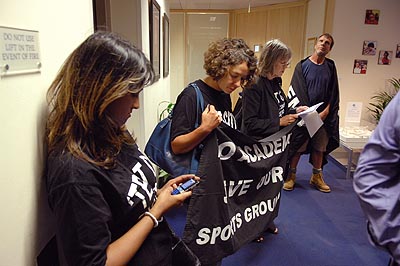 Unfurling the banners upon arrival. 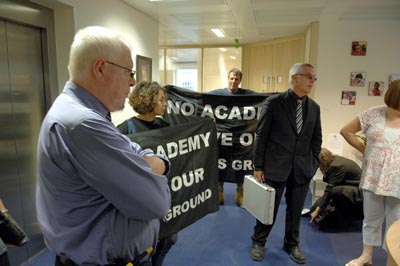 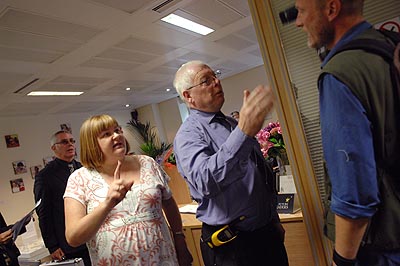 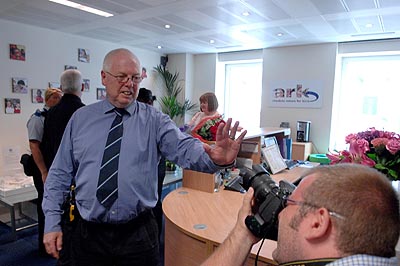 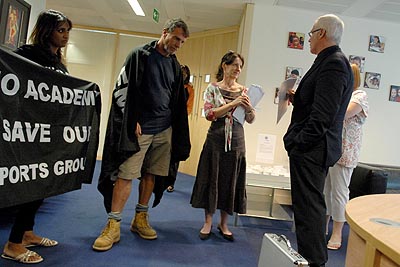 After 50 minutes someone from ARK is finally availible. 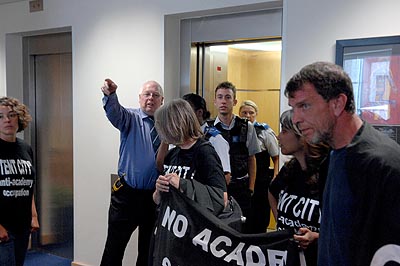 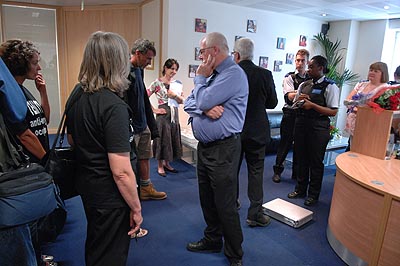 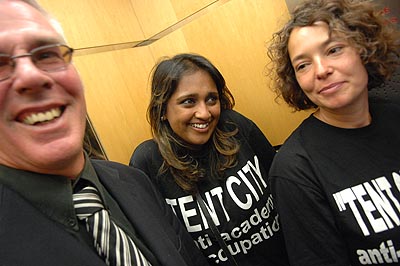 Heading out, no (citizens) arrests reported. 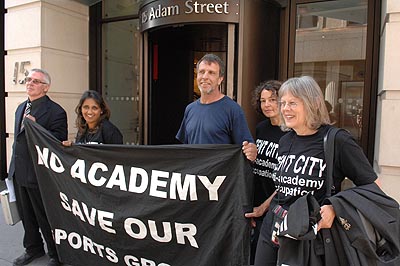 This is just the begining...mwahahahah....

Having arrived at the building in question, our fearless educationalists decided that getting past the lobby might be a problem. So a bunch of flowers was brought for the MD of ARK and the security guard very kindly signed everyone in and unlocked the lift. RESULT!

Upon arriving at the ARK offices banners were unfurled and the staff present realised that their visitors were not there to pay homage and called security. That’s the same security whom had just facilitated our arrival in the office to begin with. The teachers said they would leave when someone from ARK came out to hear their concerns. Surprise, surprise no one was available. So instead (despite the flowers) the heroic staff at ARK called the Police.

As the building (at number 15 Adam street…oops) was just a few yards from Charing Cross Police station a sharp eviction from the premises was expected. The security guard kept radioing down to reception with the instruction “When the Police arrive send them straight up!”. He did this several times. And then a few times more.

After a full 50 minutes had elapsed it was pointed out that luckily for ARK their office invaders were peaceful and very law abiding. Had ARK been a customer or supplier of Huntingdon Life Sciences then things could have been very different….

While waiting for the Police to arrive a representative of ARK suddenly became available and proceeded to blame EVERYTHING (including their inability to be available) on Brent Council. I hope (though I seriously doubt) that Brent Council are reading this. Because if ARK are blaming everything on them even before the Academy is built, then their future partnership could well be a thorny one.

Finally (after an hour) a radio message came from downstairs: “The Police are here!”. “Send them straight up!” said our plucky security guard for the umpteenth time. So all eyes nervously watched the lift. Given the time the ‘Police’ had taken in preparation we were expecting a squad in full riot gear at the very least…. Finally the doors of the lift opened and the tenuous silence was broken by audible sniggering as three community support officers walked out. They (the CPSOs) were not really sure what to make of the situation. So the teachers left of their own free will so as to avoid confusing them any further.

These are becoming decidedly fashionable. Power to the parents/teachers!